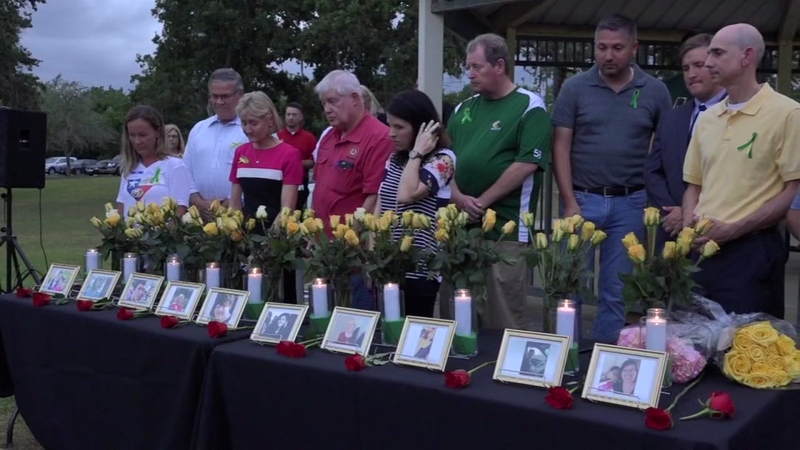 SANTA FE, Texas -- Governor Greg Abbott has called for a statewide moment of silence Monday at 10 a.m. in honor of the 10 people killed and 13 others injured in Friday's shooting at Santa Fe High School.

The school will be closed on Monday and Tuesday.

Over the weekend, students, their families, and communities united to reflect on Friday's events and support each other through this difficult time.

At a vigil in League City on Sunday, the crowd prayed and sang Amazing Grace. Moments before that, the names were read of the eight students and two teachers who were killed.

The crowd sang a powerful rendition of Amazing Grace at a vigil held in League City for the Santa Fe shooting victims.

Each victim's picture was also on a table surrounded by flowers and candles.

"We are resilient. We are strong. We are proud. We might be hurt, but I promise you we are not broken," said Santa Fe Mayor Elect Jason Tabor.

Todd Penick and his girlfriend Callie talk about about escaping when shots rang out at their school.

On Saturday, students and staff returned to the campus to pick up their vehicles and other items left inside during the shooting.

"We both had to go back into the school to get our things from the classrooms we were in. Just being in the school, it just gives you chills when you walk in the building. It's difficult and I definitely think it would be really difficult to go back," said Santa Fe High School senior Todd Penick.

Penick and his girlfriend, sophomore Callie Wylie, escaped during the shooting. Wylie said going back to the school felt surreal.

"When we walked into the building, it usually felt so safe in there and it just felt so cold and so, not like normal, obviously. With him being gone, I'm going to have to build a sense of strength myself because he won't be there to protect me and say, 'keep going, it's going to be okay.' But...I'll be okay. We'll all be okay. This community is stronger than ever right now," Wylie told ABC13.