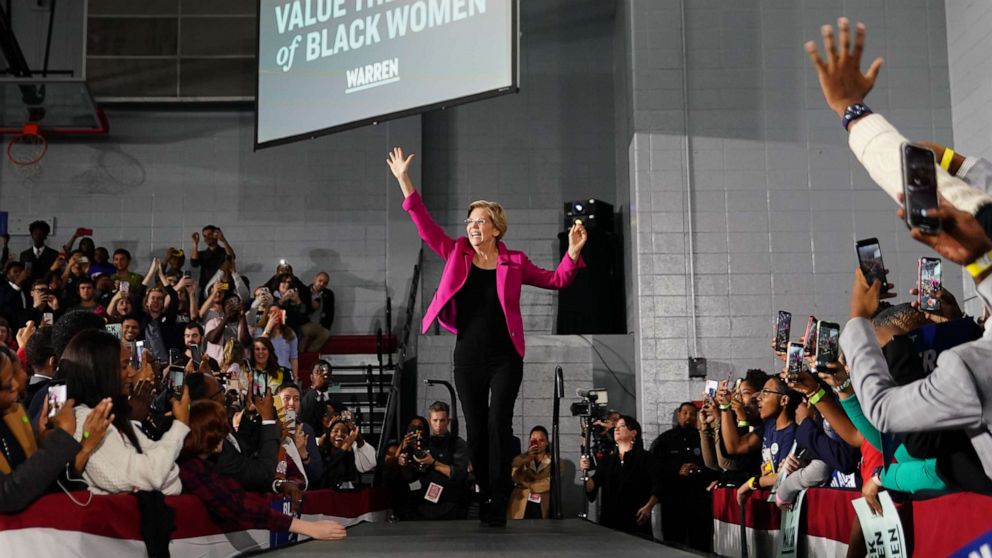 ABCNews
By CHEYENNE HASLETT
Delivering a speech on the rights of black women, presidential hopeful Sen. Elizabeth Warren laid out her commitment to black voters in Atlanta on Thursday night with an acknowledgment of white privilege and a promise to be "accountable."

"As a white woman, I will never fully understand the discrimination, pain and harm that black Americans have experienced just because of the color of their skin," Warren said to the crowd gathered at Clark Atlanta University, a historically black university.

"I'm here to make a commitment: When I am president of the United States, the lessons of black history will not be lost. Those lessons will live in every part of my presidency -- and I will ask you to hold me accountable for that promise every single day," Warren said.

Under digital banners that read "value the work of black women" and next to a DJ playing a brand-new playlist full of Drake and DMX, Warren walked onto the stage after an introduction from Rep. Ayanna Pressley, the first black woman elected to Congress in Warren's home state of Massachusetts.

Warren called Pressley "a sister warrior who knows how to win."

She then told the crowd, "The fighters I want to talk about tonight are black women."

But Warren was only a few lines into her speech when a group of loud, coordinated protesters with the school choice organization Powerful Parent Network interrupted her, halting the event for nearly 10 minutes, loudly shouting and booing until Warren was joined by Pressley on stage in an attempt to calm things down.

"I want to say something. No one is here to quiet you, least not this black woman who knows what it is when people have tried to put me in a corner and tell me to be silent," Pressley said, addressing the protesters.

"You are welcome here. The senator is here to talk about the contributions fighters like you have made to history. We are grateful for your activism and your voice, and you are welcome here. And we would love to convene after this about the issue that you are here to stoke our consciousness about," she said.

Warren did meet with the group afterward, per their leader Sarah Carpenter, who spoke to ABC News about their conversation. She said she felt heard but that "we want everyone to be accountable -- it felt like she attacks our children's choice, charter schools."

"I told [Warren], you gotta talk to real people on the ground," Carpenter said.

Carpenter is also executive director of the Memphis Lift project, an advocacy group on school choice in Tennessee that has received $1.5 million from the Walton Family Foundation since 2015.

The Walton family, heirs to Walmart and Sam's Club, are the richest family in America, and one of the leading supporters of the country's charter school movement.

Despite her association with the Walton Family Foundation, Carpenter denied any funding from them went toward this trip.

Warren, barely deviating from her remarks, but telling the crowd "I love you" and "We're good," as the protest ebbed and then broke into her speech again, eventually got back to telling the history lesson she had prepared, listing the challenges she wants to address in black and brown communities.

To loud applause, she called for the passage of Texas Democratic Rep. Sheila Jackson Lee's legislation on reparations, which would establish a commission to study the impacts of slavery and recommend compensation to begin "atonement."

"America was founded on principles of liberty and built on the backs of enslaved people. It is time for our government to face this truth, time for America to have a full-blown national conversation about reparations," Warren said, naming Jackson Lee's reparations plan.

Warren's speech, which centered on a black women-led strike that nearly halted the Atlanta economy in 1881, was a pointed pitch as the front-runner candidate looks to increase her support among black voters across the country -- and particularly among black women, a powerful voting bloc that has, especially in recent years, proven capable of delivering unexpected wins to Democratic candidates in the South.

The moment was clear to those in the audience, including retired school teacher Deborah Mossett, who drove to the rally from nearby Cobb County.

"None of them can win without the black vote, especially black women," Mossett said, speaking about the host of Democratic candidates running for the 2020 nomination.

Warren's event was the first political rally Mossett ever attended, she said. Though she's not yet decided on a candidate, Mossett said she felt more politically engaged now, in her 70s, than she'd ever been before because of her opposition to President Donald Trump.

Mossett, like others in the crowd, added that she hoped candidates like Warren who tried to connect to communities of color followed through, even without an election on the table.

Kevyn Rice, a freshman at Savannah State University, said one point of concern was that support of certain issues seemed politically convenient.

Words she used and issues she emphasized, like reparations and marijuana legalization, both of which Warren supports, can seem like a way to pander to black voters, Rice said.

"When people are so pro-black when they're not black it can seem like a facade," Rice told ABC News. "It can seem fake, like it's just a way to get black voters."

Alexandrea Moore, friend and fellow student at Savannah State University, added that they both still thought Warren "could really be for us."

"She could really be for us. But there are plenty of examples of wolves in sheep's clothing and it's sneaky-scary sometimes. We don't know whether to trust or not," Moore said.

By the end of the rally, neither were yet convinced about Warren -- or any of the other candidates they'd seen come through this cycle, they both said.

Warren has so far delivered two other large-scale speeches during her campaign: the speech she gave when she announced her campaign for president in Lawrence, Massachusetts, which was inspired by the textile workers who went on strike there, and the speech she gave over the summer in Manhattan's Washington Square Park, which drew the largest crowd of her candidacy and focused on the women who fought for labor rights after the 1911 Triangle Shirtwaist Factory fire in New York City.

The rally in Atlanta on Thursday was Warren's first large-scale speech, however, that focused -- or attempted to -- on a labor fight that was waged almost entirely by black women.

The speech also comes as Warren seeks to capitalize on a gradual increase of support among black voters over the last few months and the recent endorsement of Pressley as well as Black Womxn For, a group of around 300 black women comprised of progressive black transgender and cisgender women, gender nonconforming and nonbinary activists.

Paige Ingram, a member of the organization from Minneapolis, told ABC News she saw the rally as a pointed display of confidence on behalf of the Warren campaign.

The decision to hold the speech now, Ingram said, seemed like it was because "she has taken the time to establish accountable relationships with black voters and she's done the work."

"That takes time, that takes effort, to not just initiate a relationship but to cultivate it and figure it out," Ingram said, speaking at a Warren debate watch party Wednesday night.

So far in the race, former Vice President Joe Biden holds the strongest support with black voters, leading Democrats to wonder how other candidates running might find a path to the nomination if they don't make more of a connection in communities of color, a vital part of the country's voting population.

Warren trails Biden in many polls of black voters, as do each of the other candidates, though support for Warren has gradually increased over the last few months, gaining 12 percentage points from August to October, from 8% to 20%, according to polling from Quinnipiac University.

But in Quinnipiac University polling this month in South Carolina, a state that serves as an early test of black support in the Democratic primary contest, Biden still held a vast lead among black voters at 44%, followed by Sen. Bernie Sanders of Vermont at 10% and Warren at 8%. Biden and Sanders also had nearly three times as much name recognition among black voters in the state, giving Warren perhaps another reason to hold a large-scale rally aimed at reaching black voters: introducing herself.

Despite trailing in the polls, Warren has continued to craft and pitch her plans specifically around the idea of eliminating the wealth gap between white Americans and the rest of the country, including her proposal for higher education, which would cancel student loan debt for 95% of Americans, as well as a promise of $50 billion to historically black colleges and universities like Clark Atlanta University.
Report a correction or typo
Related topics:
abc newsnational
Copyright © 2020 ABC News Internet Ventures.
More Videos
From CNN Newsource affiliates
TOP STORIES