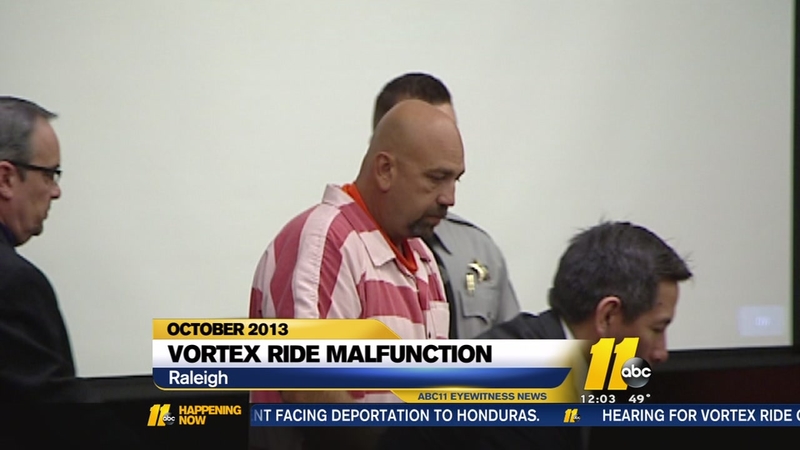 RALEIGH (WTVD) -- Members of a Durham family injured when a sabotaged ride at the 2013 NC State Fair malfunctioned were injured again in a Saturday car crash.

That's according to a Wake County prosecutor who planned to have the family members in court Monday morning for the sentencing of the ride operator who earlier pleaded guilty to bypassing the ride's safety system.

Timothy Tutterrow, of Georgia, pleaded guilty to assault with a deadly weapon charges last year in connection with the incident that left five injured.

The ride operator's boss, Joshua Macaroni, who assisted him by installing the so-called "jump wires" entered an Alford plea in the case and was sentenced last month.

Joshua Macaroni was accused of felony obstruction of justice by secretly manipulating the machine so it would pass inspection prior to the beginning of the fair.

Macaroni must also pay a $22,500 fine. He was originally charged with assault with a deadly weapon

Monday, Tutterow sat on the front of row of the courtroom where his sentencing was supposed to take place.

His attorney said Tutterow was stunned by the news that members of the Gorham family were involved in a crash. The attorney, Roger Smith, Jr., also said he was saddened.

The prosecutor said he isn't sure how badly Keisha Gorham and her husband Anthony were injured and wasn't sure exactly where the wreck happened.

Keisha was not severely injured when the Vortex ride started back up as her family was getting off but her husband and son were. Anthony Gorham suffered brain and spinal cord injuries and was left blind in one eye.

The prosecutor said Anthony Gorham is now able to walk again but may never fully recover from his injuries.