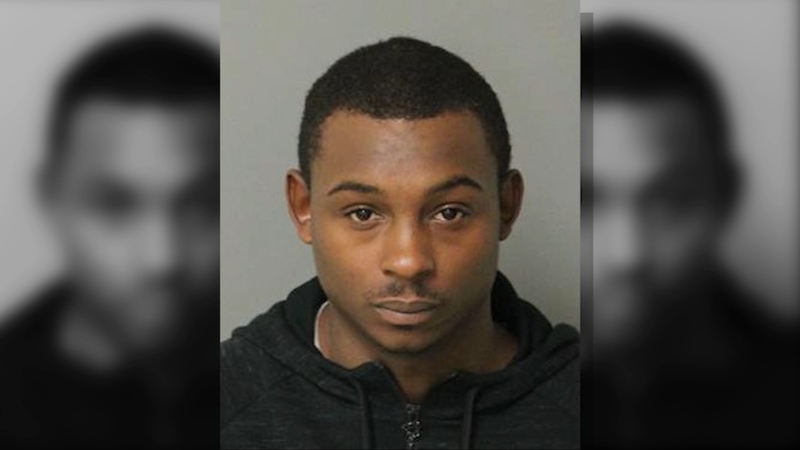 ZEBULON, N.C. (WTVD) -- A Wake County couple, both 90 years old, believe a thief targeted them at the Zebulon post office.

The man and wife spoke with ABC 11 on the condition that we not reveal their identities.

The wife said she pulled their car into a parking spot next to the post office Wednesday evening and her husband went inside.

She said as a precaution, she always locks her car doors when she's inside alone.

"He came out of the post office with the mail and when he got to the front of the car I unlocked it," she said.

Police said what she didn't know was that 26-year-old Shakeem Jones was lurking nearby.

"He was standing there when I come out of the post office waiting for that click and he made his move," the woman's husband said.

The elderly man said the thief opened the door and grabbed his wife's purse from the floorboard.

Despite being 90, having bad eyesight, and using a cane, the man said he grabbed the robber.

"He knocked me back with the door and his butt and by the time I recovered he was already headed across the street with her purse," he said.

Many valuable items, including credit cards and cash, were inside the purse.

"He got a couple hundred dollars from her purse plus the credit cards," the man said.

His wife said, "I had just cashed a check and had that in my purse."

They said it was a big loss for people their age.

"That kind of put us in bad shape," the man said.

Zebulon Police Department said they quickly began tracking the couple's credit cards, which were used at a few local businesses.

Surveillance video helped them identify Jones as the suspect.

In court Friday, Jones asked Wake County District Court judge Ned Mangum to lower his $16,000 bond so he could get out of jail, go back to work, and pick up his daughter.

While the elderly couple weren't injured during the theft, they are disheartened, believing they were targeted because of their age.

"He saw that we were old and that made it easier," she said.

Her husband added, "He had his mind made up that he was going to take advantage of those old people."

The wife said, however, she isn't interested in vengeance.

"I really feel sorry for him because he has no future. And every kid needs a future."

Her husband wasn't quite as forgiving.