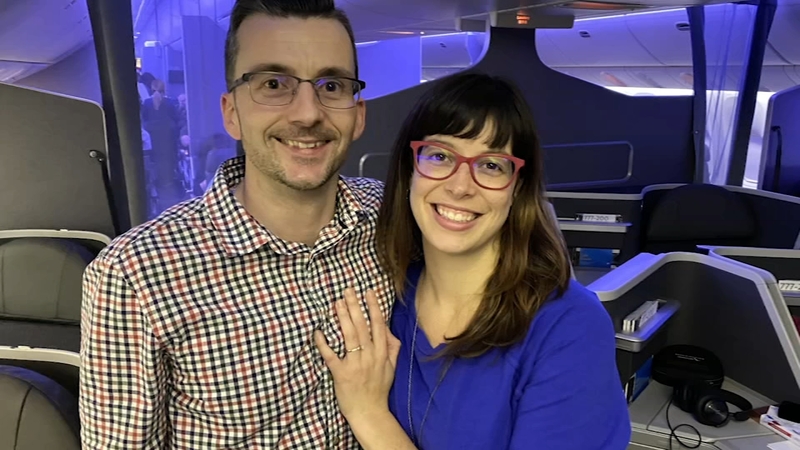 A Wake County woman had the surprise of a lifetime when her boyfriend popped the question mid-air over the Atlantic Ocean on an American Airlines flight from Raleigh-Durham International Airport to London on Christmas Eve.

Cassidy Lammers thought she was joining boyfriend Mike Leach on a trip to visit his family in England for Christmas, but Mike concocted a surprise proposal that included passengers joining in the fun as the flight crew played Ed Sheeran's song "Perfect" over the plane's loudspeakers, while Mike asked Cassidy to marry him.

Cassidy was ecstatic about the surprise and immediately said 'yes' to Mike's Christmas Eve wedding proposal.

The couple lives in Cary and works for Lenovo in RTP.

Cassidy, an NCSU and Garner High School graduate, had to wait for the flight to land in London to share the good news with her family in Wake County.

Mike told ABC11 he had been planning the proposal for weeks and it took coordination with American Airlines and a ruse to pull off the in-flight surprise without Cassidy becoming suspicious.

He shared with ABC11 the letter he wrote to the flight crew asking for their help in pulling off his surprise marriage proposal.

Cassidy and Mike met at a trade show in Amsterdam four years ago and began dating about a year ago.