Elizabeth City: How a close-knit community copes with being thrust into national spotlight with shooting death of Andrew Brown Jr. 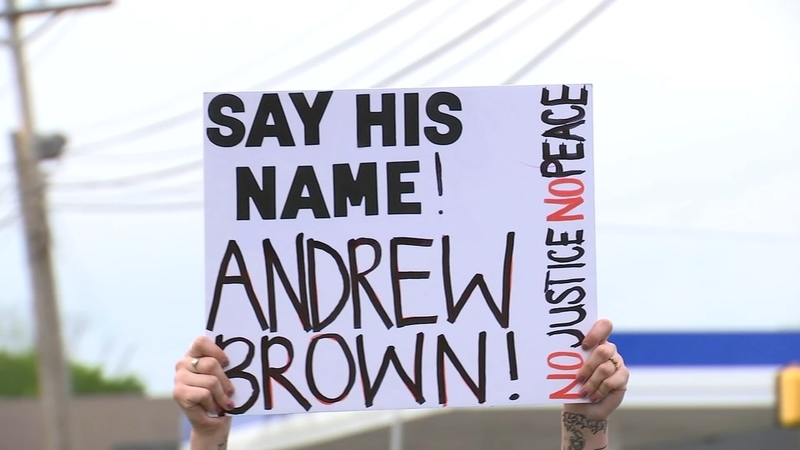 ELIZABETH CITY, N.C. (WTVD) -- In the quiet community of nearly 18,000 people, it's been quite the opposite the last two weeks in Elizabeth City.

The shooting death of Andrew Brown Jr. by Pasquotank County deputies, who were serving an arrest and search warrant, thrusted the close-knit community into the national spotlight, sparking outrage and protests every day since the shooting on April 21.

Jim Nye, the owner of Hoppin' Johnz in downtown Elizabeth City, said not many people knew about their small community.

"There's probably a couple hundred people in the country that never heard of Elizabeth City until now, and it's an unfortunate way to hear about us," said Nye.

Seven deputies were serving the warrants on April 21 when three of them opened fire on Brown in his car, killing him. District Attorney Andrew Womble said Brown had made contact with the deputies with his vehicle before the shots were fired, according to the body cam footage he looked over.

Brown's family and attorneys said an independent autopsy report shows a bullet to the back of the head killed Brown. Brown's son called the death an "execution."

More bodycam videos to be shown to Andrew Brown Jr.'s family; will not yet be released publicly, judge says

A judge ruled to allow Brown's family to see the footage in the coming days but won't release it to the public for another 30 to 45 days to allow the SBI to finish their investigation.

"Why did they shoot him over a piece of paper?!"

This had led to marches, gatherings and even a sit-in cook out in front of the Pasquotank County Sherriff's office. The small community showing out in numbers to demand transparency and all of the footage from that evening.

"We're not going to take our eyes off the prize," said protest organizer Kirk Rivers.

The Elizabeth City local encouraged demonstrators to set up lawn chairs, grills and create a presence in the sheriff's office parking lot on Friday evening.

"We're going to make this our official headquarters," Rivers said.

Others, from outside the Pasquotank County community, also made their way to the downtown area to greet and join the demonstrations.

However, whenever individuals with ill-intentions approached the group, they were quickly turned away by people like organizer Maria-Franz.

"If we do it peacefully and show the world how peaceful we can be, we're going to have some fun," Maria-Franz said.

Despite the multi-day arrests for breaking the city-mandated curfew or blocking Camden Bridge, the group, whether big or small, remained peaceful. It's something they have touted and worn like a badge of honor.

Lydia McCaskill, the General for the Raleigh-Gastonia Black Panther Party Chapter, has been in Elizabeth City for more than a week. In that time, she's been in contact with Brown's family, joined the organized marches and spoken to those demonstrators.

"The violence still never happened and has never happened, and I don't think it ever will. All these people want are answers and the video," McCaskill said.

Other people, like Fayetteville resident Pendora Harrington, stopped by for a Wednesday evening gathering, after the judge ruled on keeping the videos secret from the public for at least another month. She drove three and a half hours with her children to be a part of the movement.

When ABC11 spoke to downtown business about the protests, many were in support of what some would perceive as a threat to their bottom dollar.

"They've got a cause that I think they have the right to be heard about," Nye said.

Many of them were more upset with city leaders deciding to implement an 8 p.m. curfew, stating that it was hurting them more than any march.

The owner of Coasters Downtown Draught House took to Facebook to write a long post that condemned the city's decision on a curfew was "incompetent" and "misguided."

The city, in response to the backlash from business owners and demonstrators, moved the curfew to midnight on Friday evening.

Regardless of the obstacles, protestors have marched on every single evening with no intention of stopping until the footage is released and questions about the shooting are answered.