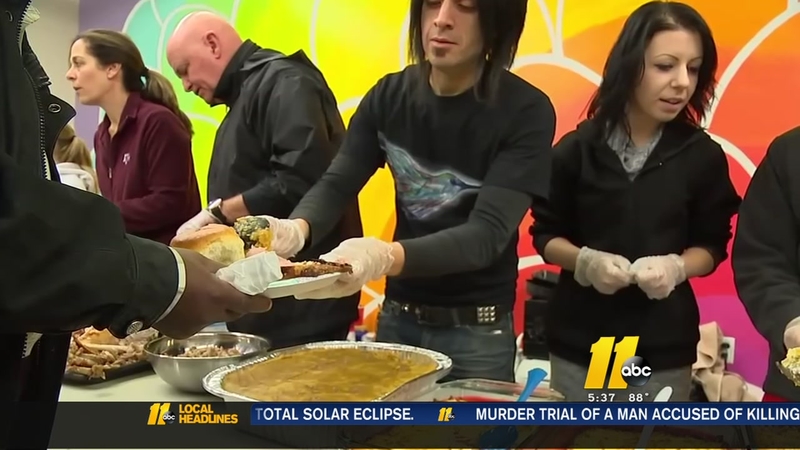 Partnership brings hope to the homeless

WAKE COUNTY (WTVD) -- The Raleigh-Wake Partnership to End and Prevent Homelessness posted on its Facebook page Monday that it will be the recipient of a large fundraiser by Enloe Magnet High School students.

The group posted:"We are beyond excited to announce that the Partnership has been selected as the 2017 NonProfit for the Enloe Charity Ball."

.@RaleighHomeless makes a big announcement on its Facebook page. More details at 12p on #ABC11. pic.twitter.com/jZe0NcBzb7

Shana Overdorf, the Executive Director for the partnership, said Enloe Magnet High School students are projected to raise over $100,000 at their Charity Ball in December.

Overdorf said the organization will use the funds for its Oak City Outreach Center on South Person Street. They collaborate with the city of Raleigh, Catholic Charities, and more than four dozen other groups to feed the homeless on the weekends. They've served nearly 250,000 meals since June of 2014 and serve an average of 300 to 400 people every weekend, according to the partnership?s website.

Overdorf said the funds will also be used for a new multi-services center on South Wilmington Street that will provide services for the homeless. The building will be renovated.

She said the funds will be substantial.

"They'll be used to support the Oak City Outreach Center, which is our current food distribution center that we operate in collaboration with the city of Raleigh and Catholic Charities and more than 60 different groups that come and provide meals on the weekends, on Saturdays and Sundays and it'll also go towards the new multi-service center that we are working with the city, the county and Catholic Charities to develop, as we speak, to open in late 2018," Overdorf said.

Overdorf also said that the cause raises awareness about their work with the homeless.

"Having 35 to 45 students from our community supporting the center and being able to put their stamp on both centers is really something that we hope compels people into a call of action," Overdorf said.

Nate Barilich, Director of the Enloe Charity Ball, said they have a goal of raising $150,000 for the partnership.

He said they will release information on how to donate in the coming months.