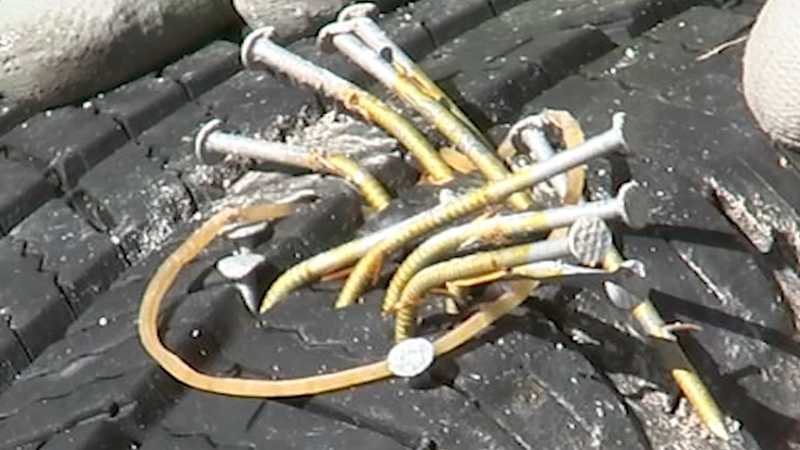 MORRISVILLE, N.C. (WTVD) -- Page Park is a quiet Morrisville neighborhood with attractive homes and clean streets. That's why several homeowners are demanding answers after some unexpected expenses linked to a mysterious spill.

Kaan Usun is one of them.

More than a dozen nails took out a tire on his Toyota Prius.

He said the nails got into the tire Jan. 27 around 7:30 p.m., as his wife and young son drove home from a visit to the boy's grandmother.

Kaan Usun shows us the nails left behind in his car

As the Prius turned off Page Road and onto their street, "she saw a box on Crown Parkway. Looked like an Amazon package in the dark of night," Usun said. "She swerved a little bit, to try to avoid it, then she heard that tick, tick, tick, tick. She could tell she hit some nails or something."

Alarmed, his wife made it home safely then alerted him. Usun went up the street to see what caused the flat.

"I found another neighbor who was hit by the same nails," he said. "We actually picked up nails afterward, all along the end of the road on Jessip."

"That's a good question. I'm assuming it's Lennar's contractors; they're doing siding over there," he said, pointing toward a site in the distance where townhome construction is underway. "It looks like pretty-heavy-duty nails, punched in with a nail gun."

Lennar is the company that also built Usun's and other homes in the area. A worker inside Lennar's on-site sales office referred ABC11 to a corporate spokesperson in California, where we sent pictures of the tire damage and nails that the homeowners think caused the problem.

A week later and Lennar still had not returned ABC11's request for comment, despite multiple attempts via email and telephone.

However, one homeowner did receive a message from Lennar stating, "...There is construction in that area and potential contractors accessing the public road. It's not possible to hold one of our trade partners accountable for this matter. For this reason, Lennar is not intending to reimburse anyone for damaged tires."
Report a correction or typo
Related topics:
societymorrisvillewake countynailstires slashedconstructionconsumer concerns
Copyright © 2021 WTVD-TV. All Rights Reserved.
TOP STORIES
'He ghosted us:' Unlicensed contractor scams another homeowner
There's a mismatch between job seekers and open positions
'An amazing mom:' Friends mourn Apex teacher who died from COVID-19
Duke apartment residents warned about flooring, structural issues
LATEST: 1/3 of state employees ordered to be vaccinated are not
Residents push to change name of Raleigh's Cameron Park community
Show More
'This is life-changing': Moore Co. man struggles with long-haul COVID
Authorities identify gunman who shot 15, killing 1, at TN Kroger
NCDOT sues Raleigh in effort to seize land for 540 project
'The View' hosts test positive for COVID moments before VP interview
Raleigh apartment residents frustrated after 4th fire in a month
More TOP STORIES News