NC NAACP president: If Capitol rioters were Black, there would have been 'mass bloodshed' and 'tear gas' 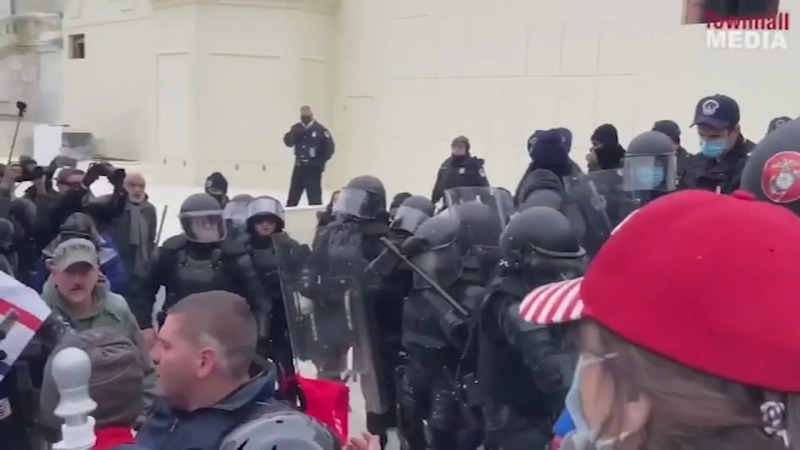 NC NAACP leader: If rioters were Black, there would have been bloodshed

FAYETTEVILLE, N.C. (WTVD) -- The world watched Wednesday afternoon as Trump supporters stormed the U.S. Capitol. Many are calling Capitol Police's response toward Trump supporters who stormed the U.S. Capitol a blatant double standard -- a stark contrast from law enforcement response to social justice movements that remained in the streets over the summer.

"Alarms started going off and warning signals on computers and that's when you really knew," said Congresswoman Alma Adams, who represents the 12th Congressional district of North Carolina.

She recalled how she felt as rioters ransacked the building as she was headed inside.

"Turbulent here and very scary. We bolted all our doors and waited until Capitol Police came and escorted us to another area," said Adams.

Rioters breached the iconic symbol of America's democracy as they pushed past barriers and officers in riot gear. Some of them are known members of white supremacist and far-right groups.

George Floyd's killing in May of last year ignited global demonstrations. The memories of the Black Lives Matter movement are still fresh on the minds of many as advocates for justice were arrested, tear-gassed and sometimes met with excessive force by law enforcement.

Doc Rivers speaks out on D.C. riot: 'Could you imagine today if those were all Black people storming the Capitol'

As many called upon the President to de-escalate the situation in a public message, in a recorded message, he instead reiterated false claims of winning the election and never denounced the rioters' destruction -- instead, he sent words of comfort: "Go home. We love you. You're very special. You've seen what happens. You've seen the way others are treated who are so bad and evil. Go home and go home in peace"

A day later, a spokeswoman for Capitol Police Chief Sund announced that he will be resigning, effective Jan. 16. The resignation comes after Speaker Pelosi called for him to step down due to the botched response.
EMBED More News Videos

Many are calling Capitol police's response toward Trump supporters who stormed the U.S. Capitol a blatant double standard.