An early Christmas gift for fans: Kentucky-UNC, Kansas on Saturday 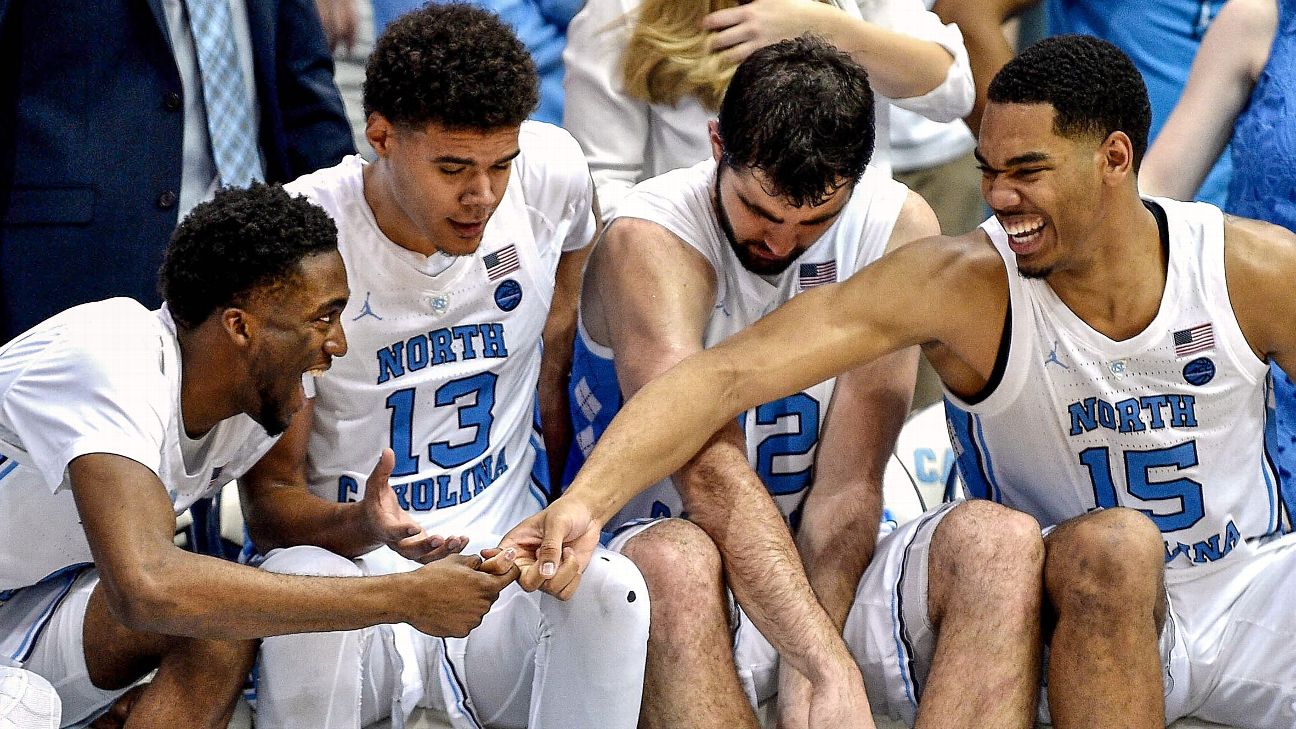 As the Christmas break approaches, there won't be a huge slate of college basketball games this Saturday, but there are a few matchups likely to be an early Christmas gift for fans.

If you ask Kentucky fans about the Wisconsinsquad that ended their team's 38-game winning streak in the 2015 Final Four, they'll probably mention Alex Poythress' injury. Poythress, a former Kentucky standout and now a 6-foot-8 forward for the Atlanta Hawks, suffered a season-ending knee injury eight games into that season.

Poythress might have been the perfect defender to stall Wisconsin's Sam Dekker and Frank Kaminsky, versatile forwards who torched the Wildcats for 42 points combined in that game.

Kentucky didn't have a talent problem in 2014-15. It had a personnel gap in a pivotal game. And that seems to be the issue with Kentucky this season too, which will face a talented North Carolina squad in Chicago on Saturday.

The Wildcats, who started the year with a 34-point loss to Dukein the Champions Classic and suffered a recent loss to Seton Hallon a neutral floor, lack the proper components to contend with the emerging wave of elite teams equipped with skilled, big shooters and ball handlers.

Kentucky's Reid Travis is a great contributor in the paint, but he's more comfortable facing true big men than defending the hybrids who've flooded college basketball. The team is surrendering 1.05 points per possession when he's on the floor compared to 0.83 PPP when he's on the bench, per hooplens.com.PJ Washington, another potent offensive player, is listed as a "poor" defender on Synergy Sports. I do not think those marks reflect the full capabilities of these two outstanding Kentucky athletes. I do, however, believe it tells a story about a pair of athletes in a traditional, two-big lineup who've been asked to defend more versatile players in small-ball schemes as coaches around the country continue to recognize and adopt Villanova's formula for success.

Kentucky entered Saturday's game ranked 53rd in adjusted defensive efficiency on KenPom.com. The last Kentucky team that finished a season outside the top 50 played in the NIT in 2013.

John Calipari's team is built to compete against the North Carolina squad that started 6-foot-10 Kennedy Meeks, 6-foot-9 Isaiah Hicks and 6-foot-8 Justin Jackson in the 2017 national title game. Tony Bradley, a 6-11 forward whom the Los Angeles Lakers selected with the 28th pick in the 2017 NBA draft, came off the bench that night.

This year's North Carolina squad has maintained the program's offensive-rebound gobbling tendencies (fifth in offensive rebounding rate on KenPom.com) under Roy Williams, but the Tar Heels scored 103 points in a win over Gonzagalast weekend because they could stretch the floor and put Rui Hachimura in isolation situations in space. Yes, Luke Maye, the preseason All-American is averaging 10.1 RPG. But more than half of his field goal attempts this season have been jump shots, per hoop-math.com. Cameron Johnson is a 6-9 wing who has made more than 49 percent of his 3-pointers this season.

North Carolina's ambidexterity is not uncommon among the best teams in America. Texas Tech, the best defensive team in the country, can switch defensive assignments off ball screens without concern because Jarrett Culver is 6-foot-6 and capable of guarding all five positions.

The Duke squad that embarrassed Kentucky in the Champions Classic has three lottery-level wings who can handle the ball and defend anyone. TheTennessee Volunteersare soaring with 6-foot-7 Grant Williams and 6-foot-6 Admiral Schofield dominating on both ends of the floor.

What will Big Ten teams do against Iggy Brazdeikis and Charles Matthews, key players for a Michiganteam that can keep pace on offense with any team in America without incurring a deficit of size on defense? Kansas is a quagmire because 6-foot-9 forward Dedric Lawson can play point guard.

Virginia, Nevada, Gonzaga, Virginia Tech: They're all on the road to the Final Four. They're all versatile.

Kentucky's Keldon Johnson (16.1 PPG) is a star. Tyler Herro is improving. And most teams will bend when they face the overwhelming talent on this Kentucky roster.

But Kentucky's two-big lineup is old school and old news in this climate. The Duke loss didn't ruin Kentucky's season. But it highlighted an overarching concern for Kentucky: College basketball is filled with versatility in 2018-19, and the Wildcats might lack the personnel to contend against the teams who use it best.

That's why Saturday matters. Perhaps Kentucky will showcase the progress it has made since the Duke loss. Or maybe another loss will confirm the larger problem with these Wildcats.

Maybe, just maybe, Calipari's squad is just like that 2014-15 team in this aspect: It's talented and imposing but missing a piece or two to compete against the best teams in the country.

Maybe Arizona State's road loss toVanderbilt, a Commodore team missing five-star freshman Darius Garland due to injury while starting three underclassmen, was a mirage. But it preserved a narrative about a Pac-12 that seems intent on sending fewer teams to the NCAA tournament this year. The conference had three reps last season. What do you say, Pac-12? Should we go for one berth this time?!

The good news for Arizona State is that Kansas has lost some of its edge with Udoka Azubuike sidelined by an ankle injury. As a team, the Jayhawks have made just 33.7 percent of their 3-pointers without Azubuike this season. They've made 51 percent of their shots from beyond the arc whenever he has been on the floor. That's a tangible difference.

Both teams are led by potential All-Americans and Wooden Award candidates: Luguentz Dort (19.8 PPG, 5.5 RPG, 1.9 SPG) for Arizona State andDedric Lawson(19.7 PPG, 11.1 RPG, 1.3 SPG) for Kansas. This is an important matchup for both teams before conference play. Kansas hopes to preserve its momentum, while a loss for Arizona State would be the team's third in four games.

Murray State didn't pick the best time to play Auburn, which lost not only to the NC State Wolfpack on Wednesday night, but likely its top-10 slot in the polls, too.

Auburn is a good team that recently added Danjel Purifoy, who missed last season due to his connection to the ongoing FBI investigation. His minutes and role will evolve. And Bryce Brown's 7-for-29 mark from beyond the arc over his past four games will eventually end. Maybe.

But this is a game to watch because Ja Morant is the most exciting player in America in the "Everyone Not Named Zion Williamson" category. The flashy, 6-foot-3 guard and projected lottery pick is averaging 22.8 PPG, 6.9 RPG, 9.6 APG and 1.9 SPG.

And he'll dunk on you, your best friend and your grandmama. He's vicious like that.