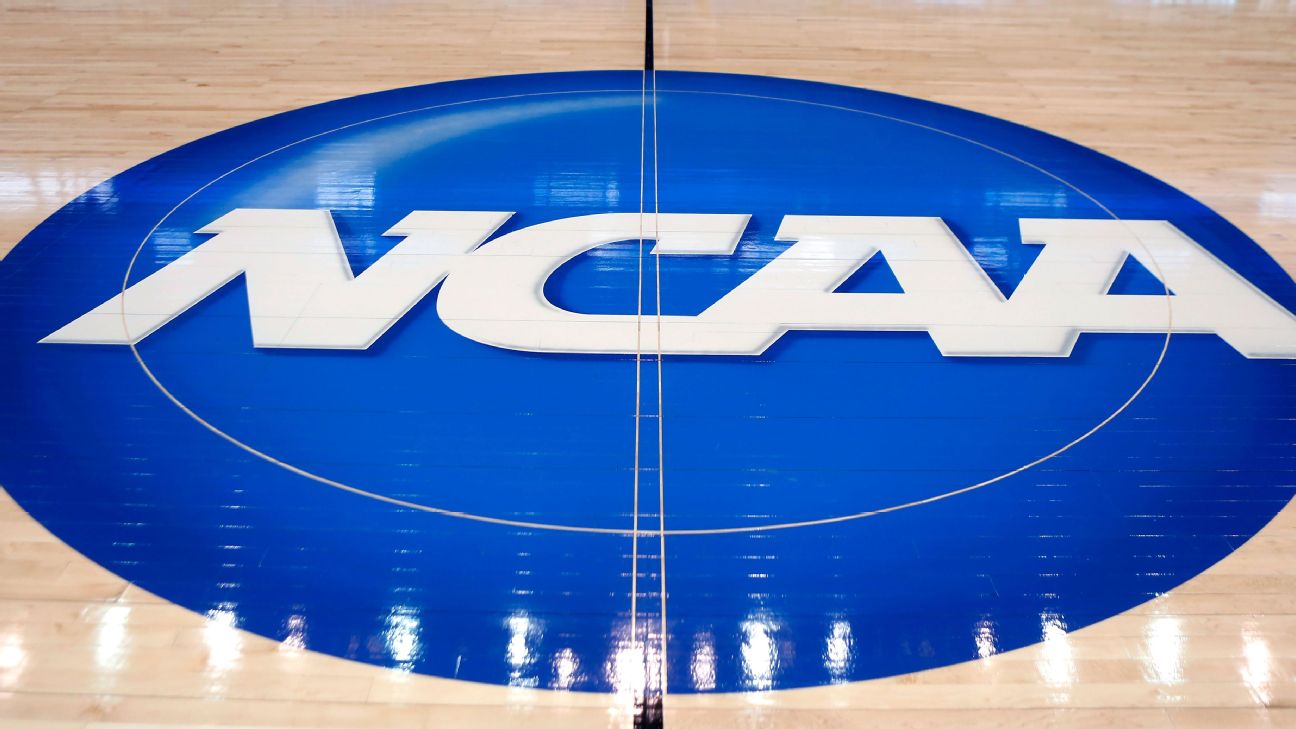 Welcome to the start of the 2021-2022 college basketball season.

November brought the return of basketball to college campuses across the country, and opening night gave fans plenty of high-quality games. On the men's side, No. 9 Duke began the with a big win against No. 10 Kentuckyin an AP top-10 matchup, along with No. 1Gonzaga began its journey back to the Final Four with a 34-point victory against Dixie State.


On the women's side, No. 1 South Carolina won its top-five matchup with No. 5 NC State to kick off the year, and 16 other ranked teams took the floor.

Opening night in college hoops brought the return of home-court advantage. With fans back in the stands again, there was considerably more noise in arenas than last year.

Here are some of the best moments from opening night:

Duke basketball honored Mike Krzyzewski ahead of the first game of his last season as the head coach of the men's team. Coach K was given a plaque filled with all of his accomplishments since he was named head coach of the Blue Devils in 1980.

Duke has won five titles under Coach K, whose overall record as head coach is 1,170-361. In June, Krzyzewski -- the winningest coach in Division I men's basketball history -- announced the 2021-22 season would be his last.

DePaul University had a special guest in attendance for its first women's game of the season -- newly crowned WNBA championAllie Quigley. The current Chicago Sky guard played for the Blue Demons from 2004 to '08. DePaul designated Tuesday's game as "Allie Quigley Night" to honor its alumna and celebrate her "special brand of true grit," according to the team's website.

There were many impressive plays from Duke and Kentucky's top-10 matchup Tuesday. Duke forward Wendell Moore Jr. started the night's highlight reel with an athletic putback jam after a Blue Devil miss. Doing it right in someone's face only added more style points to the exceptional throw-down.

Quinnipiac guard Matt Balanc threw down one of the best posterizing dunks of the young college basketball season with a monstrous slam in his team's game against Maryland.

The junior guard then stared down University of Maryland guardFatts Russell. Russellstood little chance against Balanc -- he's 5 feet,11 inches, compared to the Quinnipiac guard who stands at 6 feet, 4 inches. The dunk failed to provide any lasting momentum, as the Bobcats lost 83-69.

InIndiana's 68-62 win over Eastern Michigan, Jordan Geronimo got things off to a booming start. He took a lob from Hoosier teammate Trayce Jackson-Davis and threw in a powerful alley-oop.

No. 7 Purdue convincingly defeated Bellarmine96-67on Tuesday, and Jaden Ivey had a play to emphasize that point. He picked off an incoming pass and proceeded to throw down a vicious windmill dunk on the fastbreak. The steal was impressive, and the dunk was put down with authority.

In Brooks' locker ahead of the Wildcats' season-opening game against Duke was a shirt with Clarke's SLAM Magazine cover on it. Clarke played just one season at Kentucky as a freshman before he died at age 19 following a car accident in April. Clarke had declared for the NBA Draft before his death in Los Angeles.

The South Carolina Gamecocks women's basketball team had a big test to start the year, as it faced NC State. Even though the game was competitive throughout, the Gamecocks were too much for the Wolfpack, winning the top-five contest 66-57. Aliyah Boston put in work on both ends of the floor (just look at her stat line). The junior forward put up eight points, six rebounds and two assists in the contest, but her effort on the defensive end is what got her recognition from a high-profile player.

Boston blocked five shots in the season opener, asserting herself as a threat in the paint. WNBA star Layshia Clarendon took notice of Boston's block party with a shoutout on Twitter.

The Ohio State Buckeyes got the win in their season opener against the Akron Zips in dramatic fashion. Down by one with seconds left on the clock, Zed Key took the ball in the lane and scored as time expired. His late-game bucket helped Ohio State escape with a victory 67-66 and avoid an early-season upset.

This buzzer-beater is courtesy of Wichita State's Tyson Etienne. With time winding down, the sophomore took the game into his own hands, launching a shot from the logo. The shot hit nothing but net, and the 22-year-old guard walked with confidence after sinking the game-winning shot. Etienne's late-game heroics helped the Shockers win against Jacksonville State 60-57.

UMBC women's basketball team extended its lead against Gettysburg before the half with an amazing shot. Jatarrikah Settle of the Retrievers scooped up the ball with less than two seconds left and heaved up a shot from half court. The bucket went in, giving UMBC a 43-14 lead heading into the break. The Retrievers won the game 79-33.

Nothing says you are ready to hoop like wearing a perfect pair of kicks. Duke women's basketball might not be ranked in the AP top 25 yet, but Vanessa de Jesus, Celeste Taylor and Miela Goodchildearned a top ranking for the shoes they showed up in ahead of their season-opening game against the Winthrop Eagles.


The Blue Devils are a Nike-sponsored team, so it's no surprise that these women showed up rocking some of the freshest Nike and Jordan shoes out there. Take a look. From the Air Jordan 1 High OG "UNC to Chicago" to the Off-White Jordan 4s, these are shoes to be desired.

At the start of the 2021-22 season, 34 of the 61 newly hired men's Division I head coaches are Black. After taking replacements and firings into account, that means a net gain of 14 Black coaches. There are now 110 Black head coaches, up from 95 last season.

The Undefeated's Jesse Washington writes that even though there was an increase in Black coaches from last season, it's still not worth celebrating. Only 31% of the 358 coaches in men's Division I basketball are Black -- even though more than half of the players are Black. 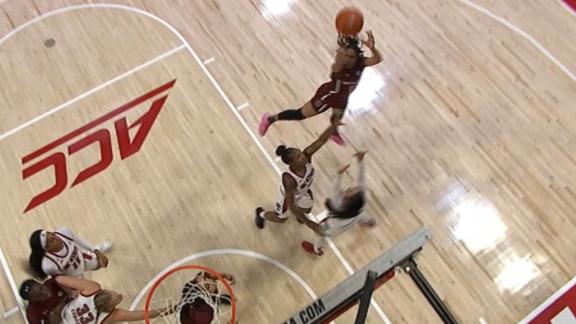 Zia Cooke puts defender in the spin cycle for a bucket
Zia Cooke runs the break and uses a spin move to confuse her defender and pull up to hit the transition bucket for South Carolina. 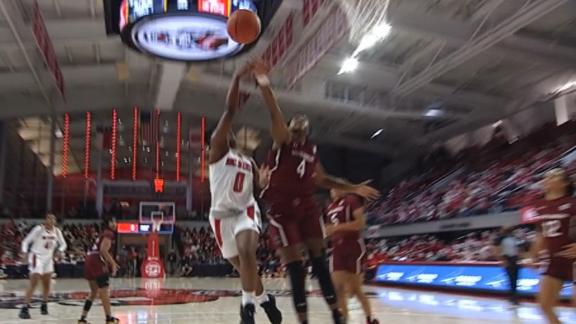 Aliyah Boston racks up 5 blocks in win vs. NC State
Aliyah Boston puts on a stellar defensive performance as she records five blocks in South Carolina's season-opening win on the road against NC State. 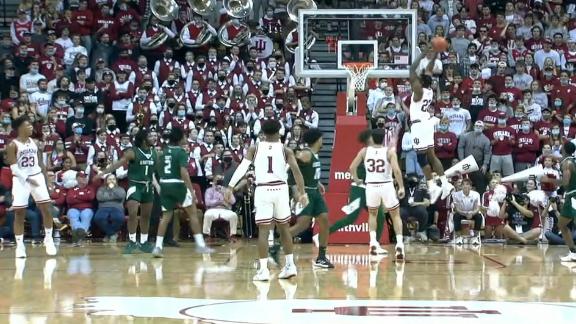 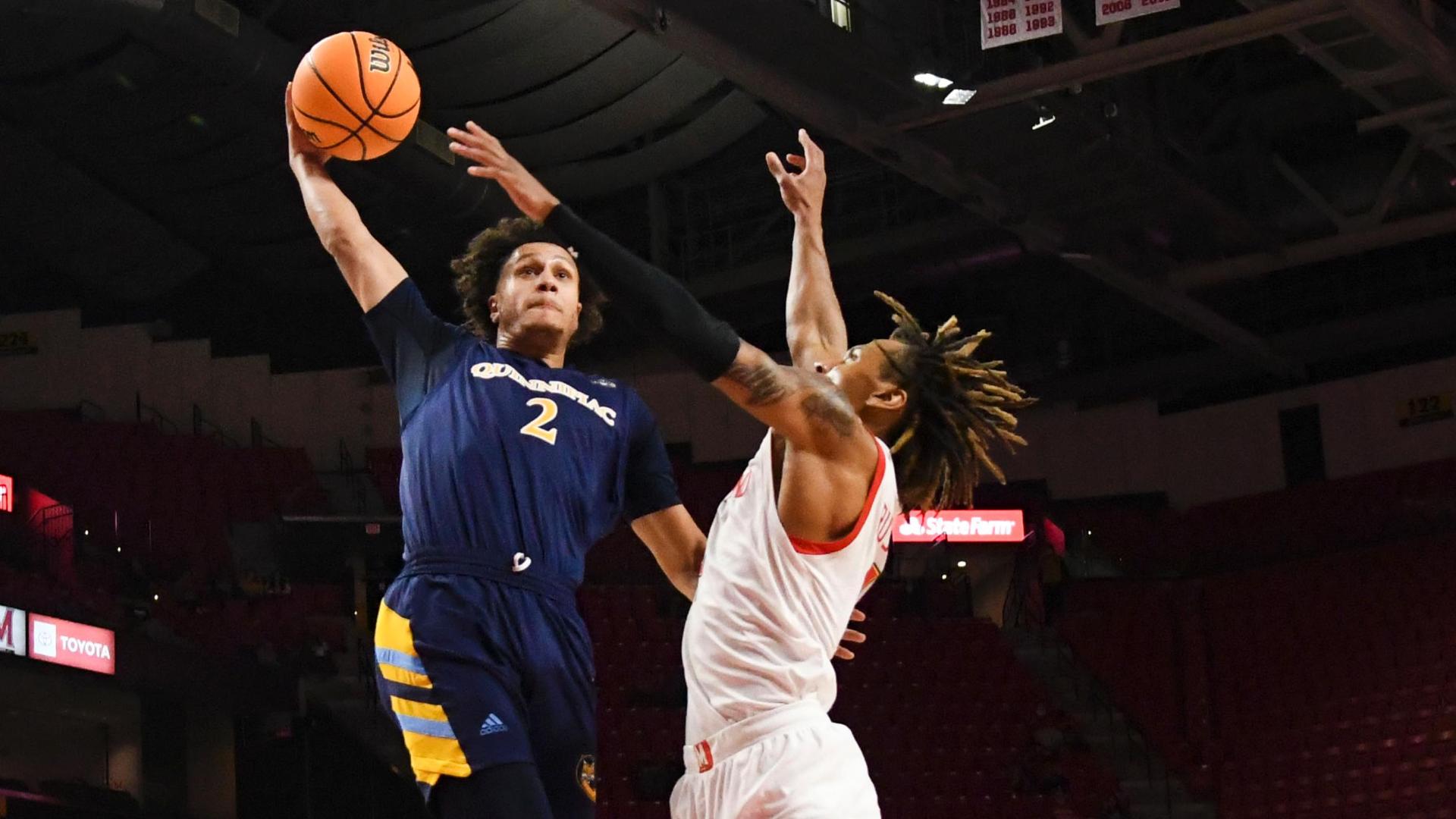 'Catch that one on SportsCenter!' This poster was nasty
Quinnipiac guard Matt Balanc throws down a vicious posterizer on Maryland guard Fatts Russell and stares him down afterward. 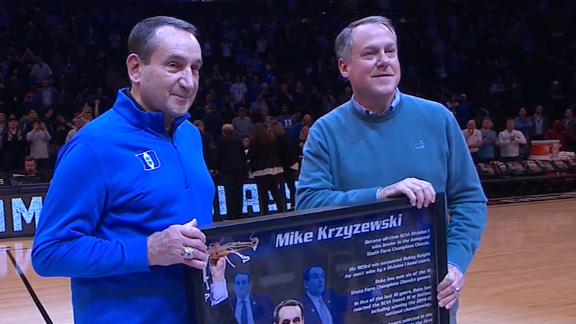 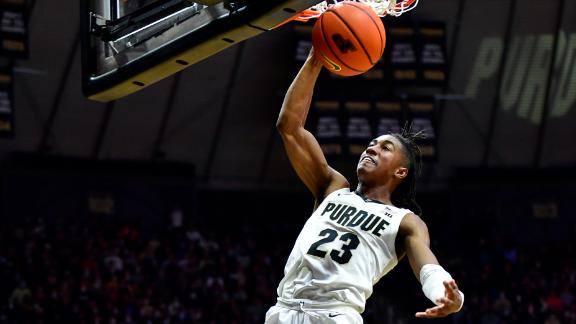 Jaden Ivey breaks out windmill slam in Purdue's blowout win
Jaden Ivey picks off a pass and gets creative with his finish on the other end as Purdue routs Bellarmine. 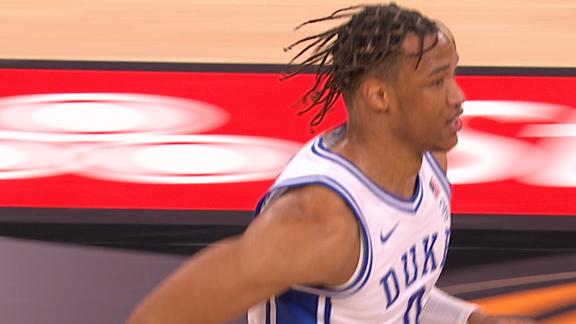