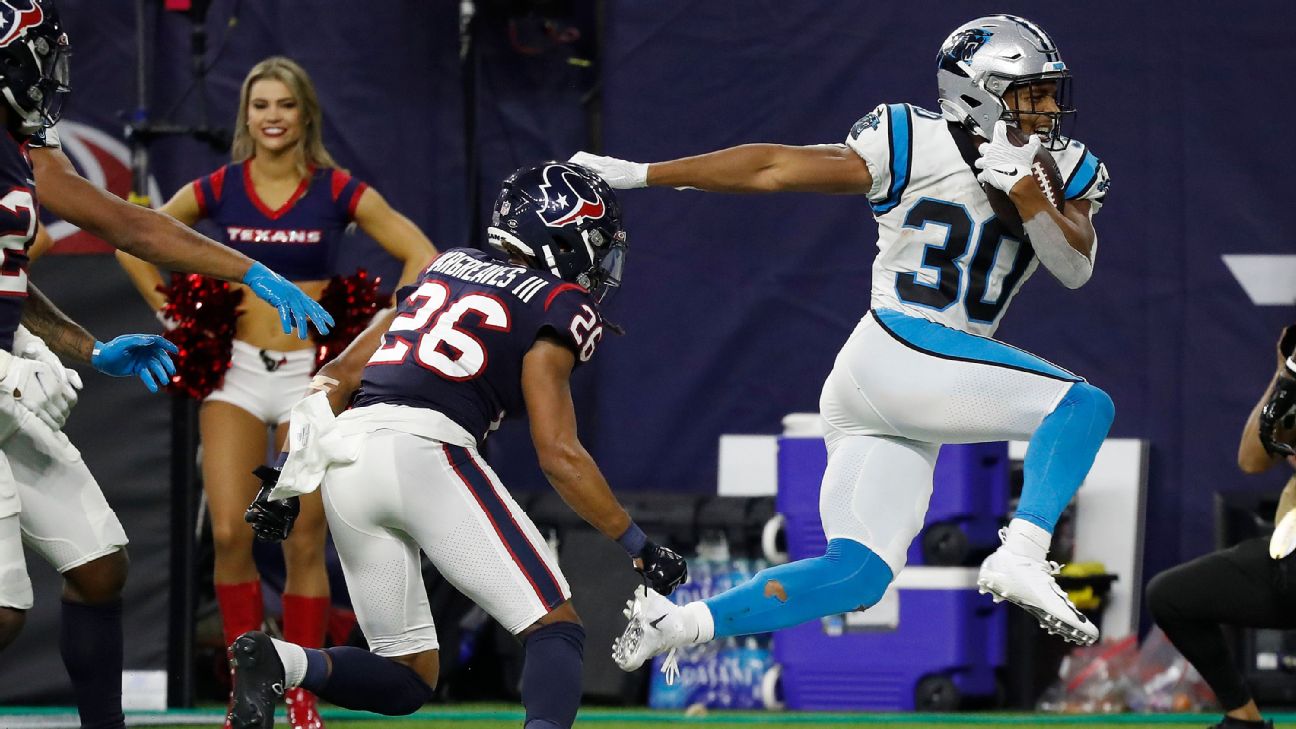 CHARLOTTE, N.C. -- The Carolina Panthers won't change their offensive approach for the Dallas Cowboys just because rookie Chuba Hubbard will replace Pro Bowl running back Christian McCaffrey, who is out several weeks with a hamstring injury.

Hubbard will start against Dallas and will be backed up by Royce Freeman, coach Matt Rhule said Wednesday. Freeman was claimed off waivers on Sept. 2 after being released by Denver.


"Obviously, you can't replace the production of Christian McCaffrey,'' Rhule said. "But those other players, they've been waiting for their opportunity. Who knows what they can do when given an opportunity.

"I don't think it's fair, right, to Sam [Darnold] and to the offensive line to go away from what we've been doing. We've been working on it for a long time."

In 2019, McCaffrey became the third player in NFL history to have 1,000 yards rushing and receiving in the same season. After missing 13 games last season with injuries, he returned in 2021 to lead the league with 324 yards from scrimmage the first two games.

"I've wanted to see him really play with his feet underneath him,'' Rhule said of Hubbard, who was selected in the fourth round of the April draft. "He's had a lot of times where he's slipped and fallen cutting off his inside foot. Once he got into a rhythm this last game you saw that dissipate. You saw him run with power and speed. I want to see him do those things."


Rhule didn't go into specifics on how the reps would be divided between Hubbard and Freeman against Dallas (2-1), but the coach did say his biggest concern about the rookie is in pass protection.

"This is a team that can bring pressure,'' Rhule said of the Cowboys. "... So he needs to help us in the passing game protection-wise as well. We've been preparing him for that for a couple of weeks."

Hubbard had only two pass block opportunities in the first three games. He won both times, according to ESPN Stats & Information. He also has run routes on 34 of the 38 pass plays he's been on the field, with five catches on eight targets.

Darnold said losing McCaffrey is "not ideal," but he echoed Rhule in that the offense can't change.

"They're not asking me to change much at all,'' Darnold said. "There's things that Christian does you can't replicate. ... Chuba is doing a great job in the run game, just being able to find the hole. Once he understands where to hit it, he gets north very fast.


"We're looking forward to him doing that on Sunday.''

The Panthers are one of only five undefeated teams and have the NFL's No. 1 defense, but the national narrative has been mostly about Dallas and how the Cowboys are their first real test.

"I appreciate it and love it," Rhule said. "I would much prefer that to people saying we're good.

"You know what I love about our team? I love the team that was down at Wofford [College], living in dorm rooms for four weeks. I like the team that no one gave a chance. I just want to stay as long as I can the Wofford Panthers. I want to be that team down there."
Report a correction or typo
Related topics:
sportsespnnewschristian mccaffreycarolina panthersnflchuba hubbardroyce freeman
Copyright © 2021 ESPN Internet Ventures. All rights reserved.
TOP STORIES
Attempted robbery blamed for Black Friday shooting
Amber Alert issued for missing 13-year-old NC girl
Study suggests past COVID infection may not fend off omicron
Parents charged in MI school shooting; Teen's mom texts 'don't do it'
Cause of Pilot Mountain wildfire discovered
Raleigh lab is 1 of dozens looking for COVID variants in US
Show More
Alec Baldwin says he's not responsible for fatal 'Rust' shooting
UNC names buildings after two Tar Heel trailblazers
SPONSORED: Big Weather's Big Recipe: Jackie's Fruited Cake
Chapel Hill students, parents say racism at heart of teacher removal
Germany locks down unvaccinated people as COVID vaccine mandate looms
More TOP STORIES News