Doctor: Neymar can return in 40 days 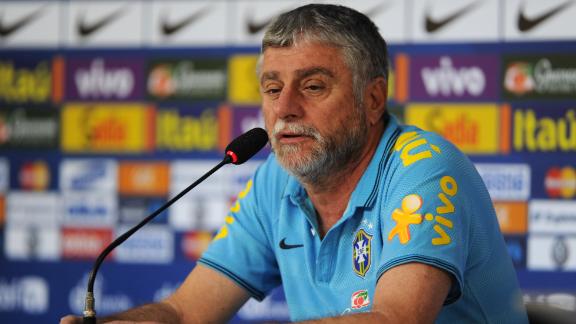 A roughened physician who has seen a lot in over three decades in football, Jose Luiz Runco could not hide his emotions on Saturday when describing what he called one the toughest moments of his career.

"I didn't even give the kid the chance to ask me. I broke the news and it was hard to see him crying profusely when told he was out of the competition," Runco said in a news conference on Saturday. "He only calmed down when I reasoned with him that as 22-year old footballer his professional life still has a lot to offer."

Runco explained that the injury will not cause long-term problems to Neymar as a player or person. The healing period is expected to last from three to six weeks and nothing apart from painkillers, a special belt and rest will be necessary for the Barcelona man to recover.

The 59-year old doctor also hinted Neymar might joining the VIP Selecao supporter fan base in Brazil's next two games in the tournament, including the semifinal against Germany on Tuesday in Belo Horizonte. They are also guaranteed at least a spot in the 3rd-place playoff in Brasilia on Saturday.

"He should be in action in 40 to 45 days. Nothing prevents him from watching the games if he feels comfortable. In the absence of a better word, this has been a good injury because it won't leave any further problems for him despite the violence with which he was hit on the back by the opposition players," Runco said.

The Brazil team doctor went on to criticise FIFA for what he defined as a nightmare scenario for doctors in this World Cup. Runco reckons referees are being lenient with dangerous challenges and fears more injuries might happen.

"I have seen a lot of bad tackles going around and I am under the impression that referees been oriented to avoid cautioning players as much as possible," said Runco, who believes FIFA will accept Brazil's plea for punishment for Zuniga's challenge. "The images we sent to FIFA clearly show the Colombian player jumping with his knee at 90 degrees and no intention whatsoever to play the ball."

Runco also revealed it was Neymar's decision to leave camp on Saturday and head to his house in the Sao Paulo state seaside town of Guaruja. The move involved a massive operation that included a medical helicopter and the stirring image of Neymar lying on a stretcher.

"The player thought it would be better for him to recover near his family and there was no issue with us," Runco said. "The only thing we did was to bring him to spend Friday night with us at the team camp so we could keep an eye on him."

Apart from waving to fans while being ferried to the helicopter, Neymar also recorded a video posted on the Brazilian Football Confederation's website, in which he thanked fans for their concern and tried to cheer them up by saying his dream of winning the World Cup at home did not die with the injury.

"I am hoping these guys will go on and win the Cup because I am part of this Selecao and want the title," said the player.

CBF also announced every information about the injury was shared with Barcelona's physician Daniel Medina, who is expected to send a representative or even fly himself to Brazil in the next few days.

Runco's timeline should allow Neymar to return before the start of Barcelona's competitive fixtures in the upcoming season.

Punishment to come for tackle on Neymar?
The ESPN FC crew debate whether FIFA will take action against Juan Camilo Zuniga for his challenge on Brazil's Neymar.

Brazil underdogs without Neymar?
The ESPN Last Call crew analyse the impact losing Neymar will have on Brazil and whether the team can defeat Germany without their star.

Neymar: Brazil will be champions
Neymar delivers an impassioned message to his fans following his tournament-ending injury.

Sabella upset after Neymar injury
Although Argentina progressed to the semi-finals, Alejandro Sabella was quite upset to hear Neymar would miss the rest of the World Cup with a broken vertebra.