Eric Reid, who filed grievance with NFL, signs with Panthers 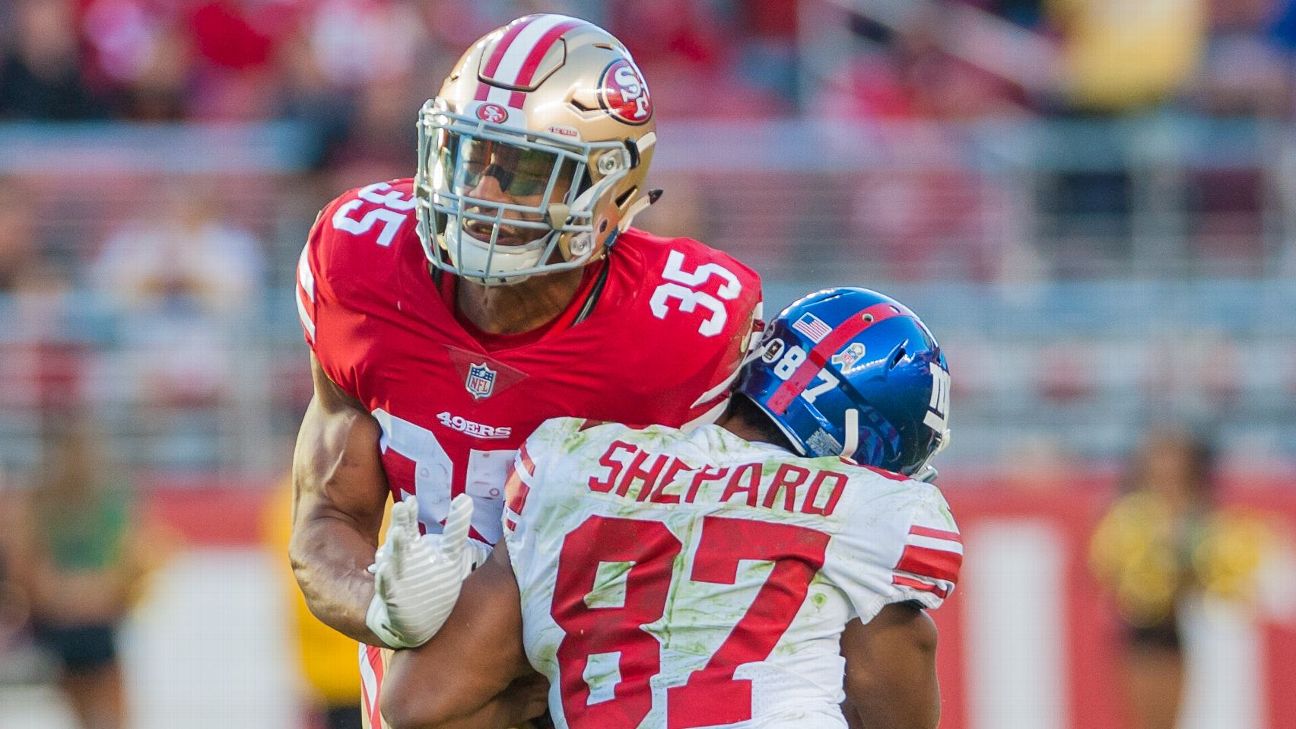 CHARLOTTE, N.C. -- The Carolina Pantherson Thursday signed Pro Bowl free-agent safety Eric Reid, who was not re-signed by the San Francisco 49ers in the offseason amid the controversy of his grievance with the NFL.

In 2016, Reid was the first player to join former49ers quarterback Colin Kaepernick in kneeling during the national anthem to protest racial inequality and police brutality.

In May, the NFLPA filed a grievance with the NFL on Reid's behalf, alleging that team owners and the league, influenced by President Donald Trump, colluded to prevent his employment because of his protests. Kaepernick, who filed a similar grievance in October 2017, remains unsigned.

Reid will replace veteran Da'Norris Searcy, who last week was placed on injured reserve after suffering his second concussion in a month.

Panthers general manager Marty Hurney told ESPN on Thursday that the team began exploring its options Monday and brought Reid in to meet with the staff on Wednesday. Asked whether Reid's grievance with the NFL was a factor, he said, "This was a football decision.''

"We made this decision based on the fact he's a good football player,'' Hurney told ESPN. "He's played at a very high level the last few years. We think he can come in and help us win games.''

A source told ESPN's Adam Schefter that Reid's grievance against the NFL is expected to proceed.

The 49ers, with starting safeties Jaquiski Tartt (shoulder) and Adrian Colbert (hip) dealing with injuries, confirmed Thursday they had made a one-year offer to Reid this week before he signed with the Panthers. They also made a one-year offer earlier this year, which he declined because it was for a backup job.

"We talked from time to time," 49ers cornerbackRichard Shermansaid Wednesday. "... I always knew he'd get signed. He's a good player. A lot worse players getting signed these days, so they're going to have a hard time explaining that, I'm sure."

Earlier this week, Panthers wide receiver Torrey Smith, a former teammate of Reid with the 49ers, made a case for signing the 2013 Pro Bowl selection.

"Honestly, with our injuries I hope he ends up here,'' Smith said. "I know how he is as a talent. If this is something where they come and talk to me about him I'll be glad to talk about him as a player, as a person. He's one of the best men I've been around, so I hope that is something that can happen for us because I know that with the injuries we have he's a guy that can help this team.

"I really hope he gets a shot. He deserves it and it's not right what's happened to him.''

"It's just been a journey for him," said Houston Texans safety Justin Reid, Eric's brother. "He's been consistently prepared for when this opportunity did come."

Smith, who has defended the right of players to protest, called the 26-year-old Reid a "great leader'' and one of the "best men that I know.''

"Both of those guys should be playing,'' Smith said of Reid and Kaepernick. "They should be in the league, both of them.''

"I think the [collusion] case that they have will be more of a landmark movement than anything," Sherman said. "A football team signing a good football player isn't really a landmark in my opinion. It's kind of too little, too late for it to be a landmark now. If somebody had signed him in March and gave him the deal that he deserved, then sure, that would have been incredible. But I think at this point, it's not a landmark of any kind."

Asked about Reid's signing on Friday, his former 49ers teammate and current Lions linebacker Eli Harold--who also knelt in protest with Reid and Kaepernick in San Francisco--said, "He deserves it. It took too long. We all knew he was getting blackballed by the league. Yes, I said it. But God was on his side, man, and showed him favor. ... He should have been signed with someone Day 1 of free agency, in my opinion."

The Panthers (2-1) are on their bye week. They played with a three-safety rotation on Sunday against Cincinnati, starting Mike Adams at strong safety and Colin Jones at free, with rookie Rashaan Gaulden providing relief.

"Eric has been a starting safety in the NFL and has played at a high level throughout his career,'' Hurney said in a statement. "After we put Da'Norris Searcy on injured reserve, [coach] Ron [Rivera] and I discussed our options, and Eric was at the top of our list.

"He is a physical safety with good ball skills and playmaking ability.''

The Panthers next play against the New York Giants on Oct. 7.