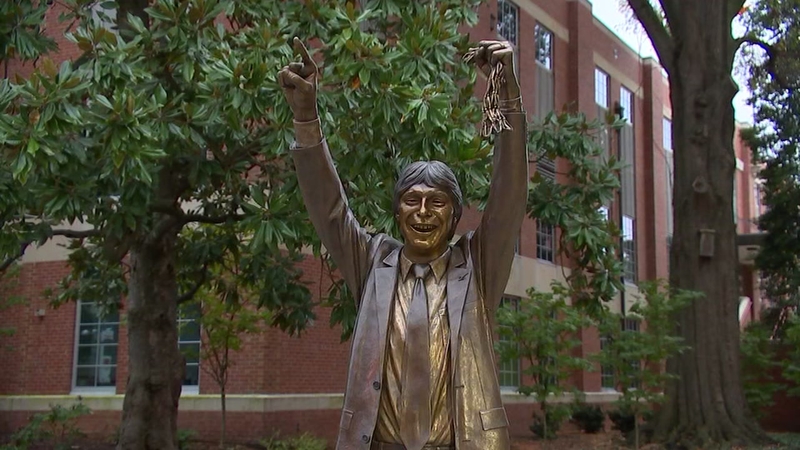 RALEIGH, N.C. -- The former home to N.C. State men's basketball will be named for Jim Valvano.

The school announced Wednesday that the arena in Reynolds Coliseum will be named for the former coach. The James. T. Valvano Arena will be dedicated on Dec. 5 to the man who guided the Wolfpack to the 1983 national championship, the program's second NCAA basketball title.

Supporters made a $5 million pledge to name the arena for Valvano, who died of cancer in 1993. The gift will help support the $35 million Reynolds Coliseum renovation project.

Excited to honor the life of this man with the naming of the James T. Valvano Arena in Reynolds Coliseum.

"Coach Valvano captured the hearts of Wolfpack fans with his coaching success and dynamic personality," said Director of Athletics Debbie Yow. "Thanks to a small group of NC State alums, we can further memorialize his contributions through this naming opportunity in his beloved Reynolds Coliseum."

Valvano was hired as the basketball coach at NC State on March 27, 1980. His 1983 squad delivered a memorable and historic run to the national title, playing under the mantra of "Survive and Advance."

Jim Valvano will always be an icon of NC State. It’s fitting that the building he led the Wolfpack to so many memorable moments will share his name. I hope you’ll join us on Dec. 5 for our Heritage Game & dedication of James T. Valvano Arena at William Neal Reynolds Coliseum.

In 10 seasons, Valvano led the program to two Atlantic Coast Conference titles and seven NCAA tournaments. That included two appearances in the Elite Eight and a Sweet 16 appearance as well as the national title. His teams went 121-37 at Reynolds Coliseum.

The coliseum is now home to the Wolfpack women's basketball program, though the men's team plays at least one game per season there, known as the "Heritage Game." The court is named for former women's coach Kay Yow, who also died of cancer.

On February 21, 1993, Valvano made his final visit to Reynolds Coliseum for the 10-year commemoration of the 1983 Championship and delivered an impactful speech that included the quote he is most recognized for, "Don't give up, don't ever give up."

The arena will be formally dedicated with the new name before the Wolfpack's Heritage Game December 5 vs. Western Carolina at 7 p.m.
Report a correction or typo
Related topics:
sportsraleighjimmy vcollege basketballnc state wolfpack
Copyright © 2021 ABC11-WTVD-TV/DT. All Rights Reserved - The Associated Press contributed to this report.
TOP STORIES
Arrest made in murder of 19-year-old killed near Food Lion in Raleigh
CA single father gets new appraisal for $150K more in value
LIVE: Biden speaks after hours of talks with Russia's Putin
Rape suspect shot in Newton Grove is in fair condition, SBI says
Study: Half of US cosmetics contain toxic chemicals
WCPSS offers bonuses for new bus drivers as it works to fill positions
Ebony Anglers compete in 2021 Big Rock Blue Marlin Tournament
Show More
NC to collect $6.5B more in tax revenue than expected
LATEST: NC residents eligible to get at-home COVID testing kit
Cary 16-year-old Claire Curzan is living her US Olympic dream
Teen rescued from chimney after being locked out
3 sunflower fields open to the public this year in Raleigh
More TOP STORIES News