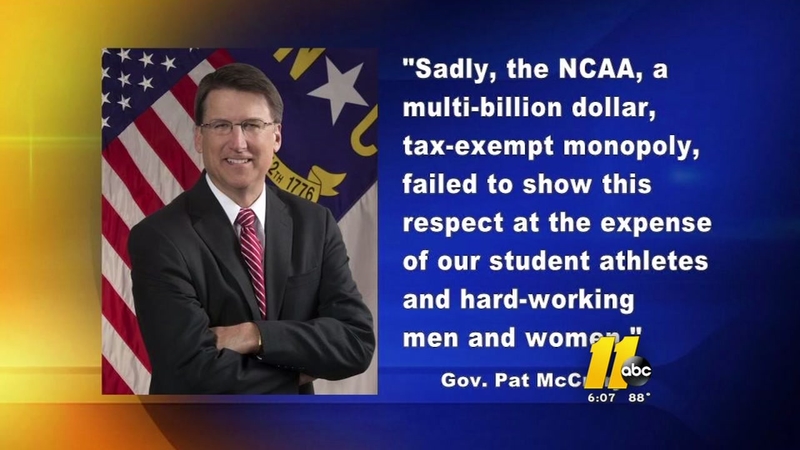 Based on the NCAA's commitment to fairness and inclusion, the Association will relocate all seven previously awarded championship events from North Carolina during the 2016-17 academic year, the organization said in a release.

The NCAA Board of Governors made this decision because of the "cumulative actions taken by the state concerning civil rights protections."

"Fairness is about more than the opportunity to participate in college sports, or even compete for championships," said Mark Emmert, NCAA president. "We believe in providing a safe and respectful environment at our events and are committed to providing the best experience possible for college athletes, fans and everyone taking part in our championships."

"The issue of redefining gender and basic norms of privacy will be resolved in the near future in the United States court system for not only North Carolina, but the entire nation," McCrory said. "I strongly encourage all public and private institutions to both respect and allow our nation's judicial system to proceed without economic threats or political retaliation toward the 22 states that are currently challenging government overreach. Sadly, the NCAA, a multi-billion dollar, tax-exempt monopoly, failed to show this respect at the expense of our student athletes and hard-working men and women."

"I genuinely look forward to the NCAA merging all men's and women's teams together as singular, unified, unisex teams," said Kami Mueller, spokeswoman for the NC GOP. "Under the NCAA's logic, colleges should make cheerleaders and football players share bathrooms, showers and hotel rooms. This decision is an assault to female athletes across the nation. If you are unwilling to have women's bathrooms and locker rooms, how do you have a women's team?"

These seven championship events will be relocated from North Carolina for 2016-17:

The only championship events that can be hosted in North Carolina this academic year are those that are decided when student-athletes earn the opportunity to play a championship on their own campus, the NCAA said.

NCAA Vice President Dan Gavitt told ESPN the men's basketball selection committee will have an expedited two-week bid process from interested sites to find a replacement for the first and second-round tournament once slated for Greensboro in March. He said the plan would be to make the selection by mid-October.

Gavitt said the new site will be in the East, joining the other East regional site Buffalo. Orlando and Indianapolis, the Southeast and Midwest, are the other two Eastern Time Zone sites. The NCAA wants a fourth. Gavitt said it will be tough to find one on short notice due to NBA and NHL scheduling. That means it may have to be an arena on a college campus, or one which has a college team as a primary tenant. South Carolina sites are now a possibility since the state removed the Confederate Flag from its state capitol in Columbia.

"We are surprised and disappointed by the NCAA's decision and regret the impact it will have on North Carolina's student-athletes, coaches, athletic staffs, fans, and the North Carolina communities previously chosen to host these championship events," said UNC System President Margaret Spellings in a statement. "As reflected in long-standing University policy, UNC campuses do not discriminate on the basis of sex, sexual orientation or gender identity, and we are fully committed to being open and welcoming to individuals of all backgrounds. We remain caught in the middle of a conflict between state law and federal guidance, and we welcome a speedy resolution of these issues by the court."

The Board of Governors views North Carolina differently from states that have similar laws for these reasons: pic.twitter.com/SO8vNsvCPE

Cary is losing the most games from the NCAA's decision. The town was planning to host four events, one in December and three in May of 2017.

There are conservative estimates Cary could take a $2.4 million economic hit.

More than 5,000 hotel reservations have been canceled and several venues are now freed up.

"(It) definitely completely caught us off guard, definitely a disappointment," said Greater Raleigh Convention and Visitors Bureau President and CEO Dennis Edwards. "Cary, unfortunately, has worked so hard to became and to brand themselves as a sports town, and they're really known nationally as a premier sports destination. And now to have something like this occur, it definitely is a blow to them."

The Visitors Bureau put in the bids for the four events three years ago.

"It is extremely competitive. There is a lot of work that goes on behind the scenes obviously to get the bids prepared, but then you're awarded the bids there's a lot of preparation that goes on," said Edward. "Our concern is once you lose them and you're kind of out if that rotation, it may be a little more difficult to get back into the rotation one you've been pulled out."

Edwards says last month the NCAA sent his organization a questionnaire and the questions were geared around HB2.

"This news is incredibly disappointing," said a statement from Scott Dupree, executive director of the Greater Raleigh Sports Alliance. "In Cary alone, we are talking about four NCAA championships this academic year. Those events were expected to generate approximately 5,300 hotel room nights and more than $2 million in direct visitor spending. College sports is one of our region's most important economic drivers, if not the most important, so this is a significant hit. It's a tremendous loss, and not just economically."

Greensboro State Rep. Chris Sgro, who is also executive director of the state's largest LGBTQ advocacy group, Equality NC, has pushed hard for HB2's repeal. Republicans have accused Sgro and other critics of the law of trying to sabotage the state, by advocating for businesses and events to boycott North Carolina. Sgro denied he had anything to do with the NCAA's decision.

"No, I'm a North Carolinian, I want this state to do well," Sgro said. "Every single person or entity that has left the state has made it clear that they have left the state over one thing, the worst LGBT law in the nation. Pat McCrory knew that and he didn't have to sign that bill."

The Board of Governors said this decision to allow these championships - called nonpredetermined sites - to be played in North Carolina is consistent with the NCAA's commitment to student-athletes.

"As representatives of all three divisions, the Board of Governors must advance college sports through policies that resolve core issues affecting student-athletes and administrators," said G.P. "Bud" Peterson, Board of Governors chair and Georgia Institute of Technology president. "This decision is consistent with the NCAA's long-standing core values of inclusion, student-athlete well-being and creating a culture of fairness."

HB2 has created a public and business backlash, which includes the NBA moving the 2017 All-Star Game to New Orleans instead of hosting it in Charlotte as originally scheduled because of the law. Duke lost a men's basketball game from its schedule when Albany backed out due to that state's travel ban, while the Vermont women's basketball team has canceled a December trip to play North Carolina in Chapel Hill.

"What a disappointment for basketball fans. Add this to the thousands of jobs and hundreds of millions of dollars (Gov.) Pat McCrory's discrimination bill have cost North Carolina," said Dave Miranda, spokesman for the North Carolina Democratic Party. "Fortunately, voters will soon have a chance to undo the damage McCrory and Republicans in the General Assembly have done and put our state back on track."

Entertainers such as Bruce Springsteen, Pearl Jam and Ringo Starr have canceled plans to play in North Carolina. And PayPal reversed plans to open a 400-employee operation center in Charlotte.

"I wish the NCAA was this concerned about the women who were raped at Baylor," Mueller said. "Perhaps the NCAA should stop with their political peacocking - and instead focus their energies on making sure our nation's collegiate athletes are safe, both on and off the field."

"There is an expectation of privacy when women and children go into the shower or locker room, and it's more than an expectation-it's a right. And our elected officials have a duty to protect that right. The NCAA is punishing the State of North Carolina because it dares to stand up for the common-sense notion that everyone has a right to privacy, decency, and safety in bathrooms, showers, and locker rooms. The NCAA is guilty of extreme hypocrisy-while it bullies the people of North Carolina to allow boys in the girls' locker rooms, showers, and bathrooms, it prohibits boys from playing on the girls' sports teams. Twenty-four states have sued the federal government over the very mandate that the NCAA is now trying to force on the people of North Carolina."

ABC11's Elaina Athans and Joel Brown contributed to this report.