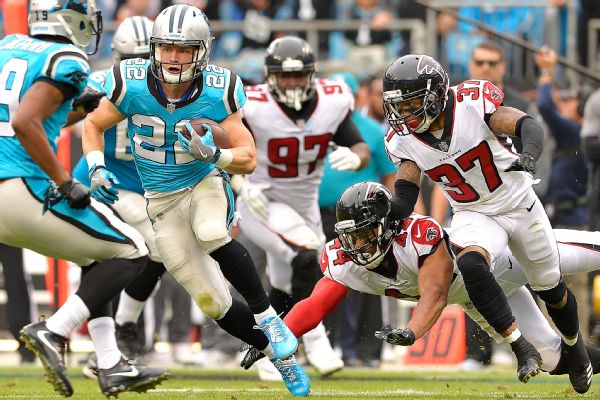 The NFL has finalized its schedule for Week 17, eliminating the Sunday night game so as to ensure that all matchups with playoff implications that affect one another will be played at the same time.

The last time the NFL regular season didn't end with a night game, either on Sunday or Monday, was in 1977 -- the last season with a 14-game schedule. The last time the final NFL Sunday fell on New Year's Eve was 2006.

Games on both Fox and CBS have been affected this year, with Fox flexing both NFC South games. Due in part to a back-loaded divisional schedule, the NFC South remains the only division that has not yet been clinched. The New Orleans Saints' game atTampa Bay has been moved from 1 p.m. to 4:25 p.m. ET. The same goes for the Panthers-Falcons meeting in Atlanta.

Both New Orleans (11-4) and Carolina (11-4) clinched playoff berths Sunday, with the Saints needing either a win over the Bucs (4-11) or a loss by the Panthers next week to clinch the division. Carolina can claim the NFC South with a win over Atlanta and a Saints loss.

The Falcons (9-6) can't win the division but can advance to the playoffs by beating the Panthers.

On CBS, Bengals-Ravens, Bills-Dolphins and Jaguars-Titansalso have been moved to 4:25 p.m.

"We felt that both from a competitive standpoint and from a fan perspective, the most fair thing to do is to schedule all Week 17 games in either the 1 p.m. or 4:25 p.m. ET windows," NFL senior vice president of broadcasting Howard Katz said. "This ensures that we do not have a matchup on Sunday Night Football on New Year's Eve that because of earlier results has no playoff implications for one or both of the competing teams."
Report a correction or typo
Related topics:
sportsespnnew orleans saintsatlanta falconsbaltimore ravensbuffalo billsscheduletennessee titansjacksonville jaguarsmiami dolphinsnflcarolina pantherstampa bay buccaneerssunday night football
Copyright © 2022 ESPN Internet Ventures. All rights reserved.
TOP STORIES
2 to 3 inches of snow possible in Triangle
Voting bill collapses, Democrats unable to change filibuster
'We can't get any more': Stores struggle to restock shelves
Third arrest made in Black Friday shooting at Streets at Southpoint
Daniel Turcios shot 5 times after crash on I-440, RPD reports
NC legislature votes to further delay primaries until June 7
'He was special': Durham friends remember Andre Leon Talley
Show More
Cumberland County mom spins way to $500,000 lottery prize
Victim in fatal I-85 crash was just 3 months old
19-year-old military driver charged in wreck that left 2 Marines dead
Earnhardt Jr. to be inducted into NASCAR Hall of Fame
Raleigh man feels lucky to be alive after bullet found above his bed
More TOP STORIES News