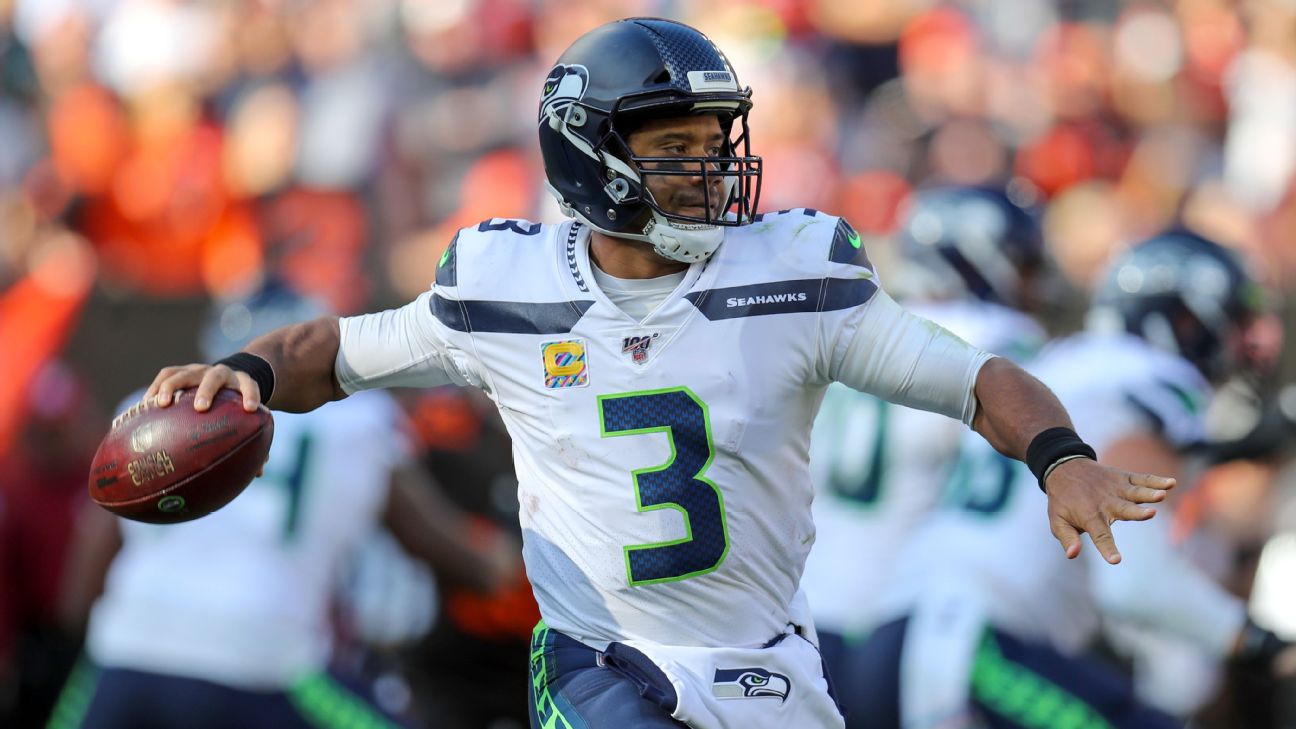 Six full weeks of the 2019 NFL season are behind us. There's still a lot of football to be played, but we've seen enough to at least start gauging who deserves MVP consideration.

A panel of seven analysts -- Matt Bowen, Mike Clay, Courtney Cronin, Jeremy Fowler, Dan Graziano, Kevin Seifert and Field Yates -- will vote every four weeks on the top players in the MVP race. We'll use those seven sets of rankings to give our top five candidates overall, using Heisman Trophy-esque scaling for each ranking. How does the field stack up to this point?

We also look at a few names who have seen their MVP stock either spike drastically or plummet in the early going.

Here are the players off to an MVP-caliber start.

In six nearly flawless outings that make Wilson the clear-cut MVP favorite, the quarterback has thrown for 14 touchdowns without an interception, a streak that puts him in the top five in NFL history. Seattle's 5-1 start is a credit to how much Wilson has carried this team, overcoming offensive-line issues, a relatively thin receiving group that just lost breakout tight end Will Dissly to injury, and an offense that, for some reason, wants to stick with its run-first mentality when it has one of the few players in the NFL who can transcend any scheme.

Kansas City's back-to-back losses to the Colts and Texans, coupled with big-moment plays strung together by Wilson and Deshaun Watson in recent weeks, have last season's MVP down a spot from where he opened as the favorite to repeat in 2019. Still, Mahomes has done some remarkable things in six games, such as throwing 212 consecutive passes before recording his first interception of the season, the sixth-longest streak to begin the NFL season, according to Elias Sports Bureau research.

We'll be keeping an eye on how Mahomes' injured ankle and having wide receiver Tyreek Hill back at his disposal affect his play going forward.

Watson's surge in the MVP conversation stems from leading the Texans to the top of the AFC South at 4-2. But more impressive than his 426-yard, five-touchdown day against the Falcons two weekends ago is how he performed in key moments of a head-to-head matchup with Mahomes in Week 6. Watson led a 14-point comeback on the road to take down the Chiefs while rushing for two touchdowns, including the winner in the fourth quarter, and now leads all QBs with five rushing scores this season.

Coach Bill O'Brien's confidence in his third-year quarterback was evident in a late-game decision to go for it on fourth-and-3 up seven points to secure the victory at Arrowhead. Watson has proved that he can overcome multiple in-game obstacles to shine in the game's biggest moments.

This guy never leaves the field. Since losing Cam Newton to a foot injury in Week 2, the Panthers have relied heavily on McCaffrey, handing him the ball 92 times and throwing 27 passes in his direction. No running back has more yards from scrimmage through the first six weeks of the season (923). McCaffrey continues to turn in impressive performances, rushing for 176 yards against Jacksonville, 153 yards at Arizona and 128 yards in the opening loss to the Rams.

The 23-year-old is on pace for 2,771 scrimmage yards this season, which would be most in NFL history, and his play has helped the Panthers bounce back from an 0-2 start with four consecutive victories.

Jackson is on pace to annihilate the single-season quarterback rushing record after running wild in the Ravens' victory over the Bengals and becoming the first QB of the Super Bowl era to throw for 250 or more yards and rush for 150 or more in a regular-season game. Michael Vick is the only quarterback in NFL history to rush for over 1,000 yards in a season, but if Jackson continues at this rate he'll eclipse 1,226.

In Week 7, Jackson and Wilson go head-to-head in Seattle. Since Jackson made his first start in Week 11 last season, Jackson's 10 wins are tied with Tom Brady for the second-most among quarterbacks in that time. The only QB who has won more games in that span is Wilson (11), according to ESPN Stats & Information research.

Tom Brady, QB, New England Patriots: Brady has thrown an interception in each of the Patriots' past three games after tossing seven touchdowns without a turnover over the first three weeks. Though his stats aren't as impressive as they've been in previous seasons (he's completing 65.4% of his passes for 1,743 yards, 10 TDs and 3 INTs), the six-time Super Bowl winner is still in the mix with the backing of the No. 1 defense in the NFL.

Aaron Rodgers, QB, Green Bay Packers: Rodgers doesn't have near the weapons of any quarterback listed in the top five, especially with Davante Adams missing time with an injury, so watching him play at a high level reliant upon his own heroics has him on the cusp of being an MVP candidate. What he did against Detroit in a prime-time thriller helped him earn his 10th career win when trailing by at least 13 points, which ties Peyton Manning's mark for the most in the NFL since he became a starter in 2008.

Dalvin Cook, RB, Minnesota Vikings: The Vikings became the first team to rush for 100 yards against the top-ranked Eagles run defense, thanks to the contributions of Cook, who already has a career-high four 100-yard rushing games this season.

Let's look a little further at what sparked Rodgers' late-game magic in Detroit on Monday night. The Packers were already without Adams, and Geronimo Allison got injured in the second half. Rodgers has shown that no matter who he's throwing the ball to, he's going to use his incredible abilities to put that player in position to succeed in the game's biggest moments.

That's what we saw with Allen Lazard, who caught four passes for 65 yards and a touchdown in the fourth quarter against Detroit, after not previously ever being targeted by Rodgers. The play Rodgers has strung together in a brand-new offense is the catalyst behind the Packers' 5-1 start. If Green Bay is somehow able to get a No. 1 seed in the NFC, it'll be because of what No. 12 is doing.

Cook and McCaffrey are setting the tone for running backs this season. The third-year Florida State product is averaging just under 100 yards per game and, like McCaffrey, he is the focal point of his team's offense. His 8.2 yards per target when coming out of the backfield, per NFL Next Gen Stats data, is the most in the NFL (minimum 20 targets), and he ranks second in yards from scrimmage with 796 and second in total yards per game (132.7) among all running backs and receivers.

The Rams are reeling right now in the midst of a three-game losing streak, and they need better play at quarterback in order to stop the skid. Goff completed 45 of 68 passes for 517 yards and two touchdowns against the Buccaneers, but he was plagued by three interceptions. He doesn't deserve blame for the following Seattle loss, but he did launch two near-pick-sixes with the game on the line in the fourth quarter. Finally, a humbling loss to the 49ers on a day when Goff threw for just 78 yards will have coach Sean McVay going back to the drawing board to figure out where things can improve in this offense, starting with his quarterback's 7-to-7 TD-INT ratio.

Prescott is still an MVP-caliber QB, and moments like the fourth-quarter comeback he initiated in a loss to the Jets -- 11 of 15 for 94 yards and a rushing touchdown -- show he's more than capable of overcoming tough obstacles in games. But when his core of playmakers isn't at full strength, it's tough for Prescott to elevate his supporting cast.

Still, the 73.5 Total QBR that Prescott posted against New York keeps him at the top of the season-long leaderboard, and he has outperformed his expected completion percentage in all six starts this season. 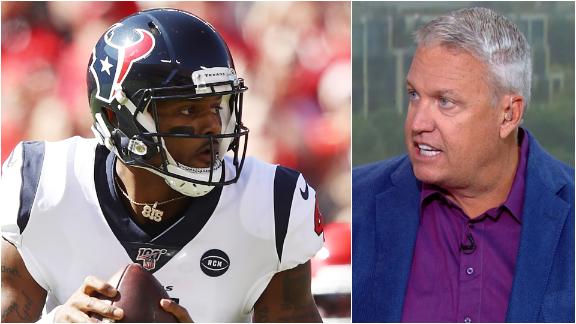 Is Watson in the conversation for MVP?
Dan Orlovsky and Rex Ryan give their take on where Deshaun Watson ranks among this season's MVP candidates. 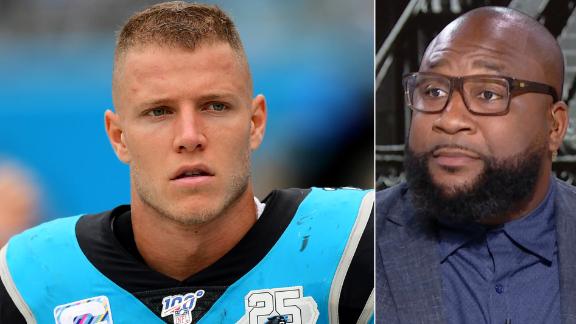