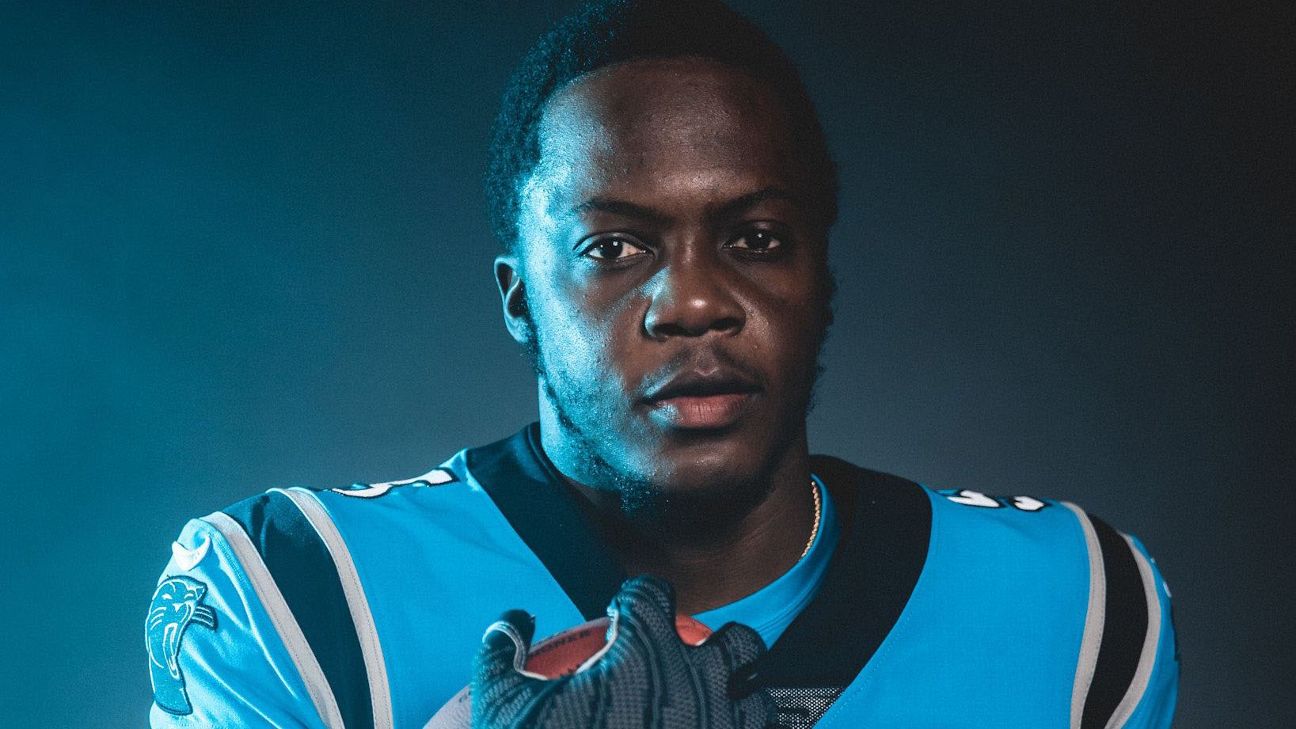 Donning the same number he has worn since high school, quarterback Teddy Bridgewater showed off his blue and black No. 5 jersey on Sunday during the Carolina Panthers'2020 training camp.

Bridgewater wasn't the only player trying on new threads, as Los Angeles Chargers running back Austin Ekeler said he's "feeling clean" after sporting his No. 30 uniform.


Other highlights from Sunday's camps include Arizona Cardinals quarterback Kyler Murray,an avid chess player,going head-to-head with veteran wide receiver Larry Fitzgerald in the locker room, and Buffalo Bills coach Sean McDermott offering words of advice during the coronavirus pandemic:"Back up or mask up."

Here's what you need to know from camps across the league:

Top news of the day

Philadelphia Eagles coach Doug Pederson has tested positive for the coronavirus, according to league sources. Pederson convened a previously unscheduled team meeting Sunday night to share the news with his players. He did this after receiving a second positive test result confirming the diagnosis. Pederson is asymptomatic and feeling fine, according to a source.

Jacksonville Jaguars quarterback Gardner Minshew was one of five players the team put on the reserve/COVID-19 list, the team announced Sunday. In addition to Minshew, the team also put running back Ryquell Armstead, tight end Charles Jones, receiver Michael Walker and safety Andrew Wingard on the list. A player doesn't have to test positive for the virus to be placed on the list. The Jaguars have announced Minshew as their starter in 2020 after he threw for 3,271 yards and 21 touchdowns with six interceptions as a rookie in 2019.

New England Patriots safety and longtime captain Devin McCourty ripped the NFL on Sunday for attempting to move the deadline in which players can decide to opt out of the 2020 season. "I think it is an absolute joke that the NFL is changing the opt-out period, mainly because they don't want to continue to see guys opt out. I'm sure they're shocked about how many guys have opted out," McCourty said in a video conference with Patriots reporters. "I think it's terrible. I think it's B.S. that the league has changed that date."

Quotes of the day

Wide receiverJalen Reagor's stock is ticking upward, even before the Philadelphia Eagles take the practice field. Reagor said he was training at the X and Z positions -- a departure from earlier this season, when coach Doug Pederson said he would be learning one spot to start. And you can tell special-teams coach Dave Fipp is eager to get him involved in the return game. "Jalen's obviously a really explosive player," Fipp said. "When the ball is in his hands, he's electric." The 2020 first-round pick probably will take on a bigger role with Marquise Goodwin opting out of the 2020 season. -- Tim McManus

Defensive tackle Kawann Short is the only one of five captains who returns from last season's Carolina Panthers, and Short spent last season on injured reserve because of a shoulder injury that required surgery. After an unusual offseason because of the coronavirus pandemic, Short faces a rebuilding team in which he is one of four defensive starters returning. Short considered opting out but has decided to play. He's appreciative for all the strict measures Carolina has taken to insure the safety of everyone. "The process is crazy," Short said Sunday. "I mean, as soon as you get out of the car you have to do a test. You can't really get in the parking lot without a mask. Hand sanitizers everywhere. Then after that, before you get to the door, you have to fill out a survey and have another temperature check. We have these monitors where you can't get too close to anybody [8 feet for more than 10 minutes and an alarm goes off]. ... It was overwhelming, but it's the right thing to do." The good news for Short is he has 2020 first-round pick Derrick Brown beside him and the shoulder is ready to go. -- David Newton

Now that defensive leader C.J. Mosley has opted out because of coronavirus concerns, the issue becomes: How do the Jets replace him at linebacker? Avery Williamson (75 career starts), Patrick Onwuasor (32), Neville Hewitt (23) and James Burgess, Jr. (21) are an experienced group, which helps. The spotlight shines on Williamson, currently on the physically unable to perform (PUP) list after missing last season because of ACL surgery. Once pegged as a potential salary-cap casualty, he could wind up as the Jets' starting Mike linebacker, if healthy. -- Rich Cimini

Veteran fullback Jamize Olawale became the third Dallas Cowboys player to opt out of the season, joining cornerback Maurice Canady and wide receiver Stephen Guidry. Olawale has been the Cowboys' starting fullback the past two seasons, and the team picked up his 2020 option earlier in the offseason. His absence might not seem big, but coach Mike McCarthy relied on a fullback while coach of the Green Bay Packers. The only other listed fullback on the roster is undrafted rookie Sewo Olonilua.-- Todd Archer

The Green Bay Packers are going with a 90-man roster -- for now. General manager Brian Gutekunst said Sunday that they will operate under the split-squad rules to start camp. "Technically our roster is right around 83 with some of the COVID [reserve] guys that won't count," he said. "We're going to do the split squad thing. How long we're going to do that for, we'll kind of determine as we go forward." Teams have to reduce rosters to 80 before the first padded practice on Aug. 17. Teams who reduce to 80 before that can hold full-squad (not split) sessions. "It's really the rookies and a certain portion of the players who were injured last year and then the veterans, and that's how we'd have to keep them split," Gutekunst said. "That's where we are right now." -- Rob Demovsky

With tight end Matt LaCosse deciding to opt out of the 2020 season on Sunday, it upped the New England Patriots' total to eight players deciding not to play. That's easily an NFL high. LaCosse projected to make the initial roster, complementing rookies Devin Asiasi and Dalton Keene, both whom the Patriots traded up to select in the third round of the draft. So his absence will put even more pressure on the rookies for immediate contributions.-- Mike Reiss

New York Giants coach Joe Judge had to call an early audible. The Giants wanted to go the 90-man roster route and give every player a look, but in the end, it was not possible. So the Giants trimmed their roster, cutting eight players, including running back Jon Hilliman and outside linebackerChris Peace. Defensive endLeonard Williams (hamstring) was also designated a non-football injury. The Giants deemed it necessary to get down to the 80-man roster option in order to have full-team walk-throughs, even during this acclimation period. Judge, ultimately, needed to get his players working together on the field, and thought this was necessary to have his team ready for the season.-- Jordan Raanan

The New Orleans Saints released three veteran wide receivers Sunday as they trimmed their roster from 90 to 81 --Tommylee Lewis, Krishawn Hogan and Maurice Harris. That was shaping up to be the most crowded position battle on the team. Now veterans Austin Carr and Bennie Fowler and youngsters such asEmmanuel Butler, Lil'Jordan Humphrey, Juwan Johnson and Marquez Callaway should get an even better chance at the fifth or sixth roster spots. The Saints also released G Adrian Magee, FB Ricky Ortiz, RB Taquan Mizzell, CB Deatrick Nichols, S Chris Johnson and DE Gus Cumberlander.-- Mike Triplett

The Cleveland Browns placed wide receiver Jarvis Landry on the physically unable to perform list following his physical over the weekend. However, the receiver remains on schedule to be ready before the start of the season. Landry underwent offseason surgery to address a hip injury that plagued him all last year. He has never missed a game in six seasons in the NFL, and has said his goal is to keep that streak alive.-- Jake Trotter

The Atlanta Falcons now have six players on the reserve/COVID-19 list after starting linebacker Foye Oluokun was moved to the list Sunday. He joined defensive tackle Tyeler Davison, fullback Keith Smith, safety Jamal Carter, safety Jaylinn Hawkins, and quarterback Danny Etling. The Falcons can't comment on the status of the players, but sources said Smith and Carter were asymptomatic after testing positive, and that Etling could return Monday or Tuesday. The Falcons have 79 players active and six on that reserve list, which does not count against the active roster. The Falcons cut punterRyan Allenon Sunday after drafting a punter in Sterling Hofrichter, and they waived tight endCaleb Repp, centerAustin Capps, tackleScottie Dill, and linebackerJordan Williams. They have yet to add veteran cornerback Darqueze Dennard, who is believed to be going through the necessary testing to join the team this week. The Falcons have to be at the new 80-man roster limit by Aug. 16, so more moves will come as guys return from the COVID-19 list. -- Vaughn McClure

Baltimore Ravens starting center Matt Skura was placed on the PUP list to begin training camp. Skura suffered a season-ending knee injury in November, but he is expected to return at some point in camp. "I'm optimistic about Matt, I really am," Ravens coach John Harbaugh said last week. "But we'll be careful." Skura will battle Patrick Mekari and Bradley Bozeman for the starting center job for the Ravens, who led the NFL in scoring last season. -- Jamison Hensley

Two corners hold a big key to Washington's versatility in the secondary: Kendall Fuller and Jimmy Moreland. Washington signed Fuller, whom it had traded to Kansas City in 2018 as part of the Alex Smith deal, this offseason. Fuller will start in the slot, but he can play safety in some alignments as well. Washington can tap into that versatility even more if another player shows he can play inside and that's where Moreland enters. He played inside last season, though he had never done so at James Madison University, where he was strictly a man corner on the outside. Moreland struggled to defend inside, but if he can improve here it allows Fuller to move around more. Moreland also could compete on the outside where Washington likes his instincts and ball skills. New secondary coach Chris Harris said he loves Moreland's toughness. 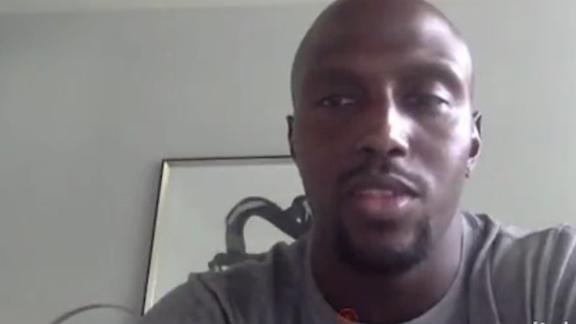 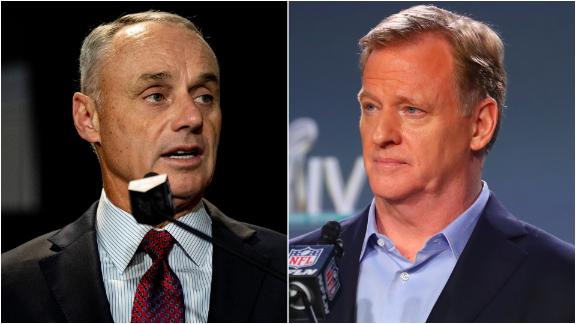 Will positive tests in MLB affect the NFL?
Jalen Rose and David Jacoby go in depth on why they think the positive MLB tests could force the NFL to change its plans for the 2020 season.
Report a correction or typo
Related topics:
sportsespnarizona cardinalsnflcarolina panthersdailytraining camp2020
Copyright © 2020 ESPN Internet Ventures. All rights reserved.
More Videos
From CNN Newsource affiliates
TOP STORIES