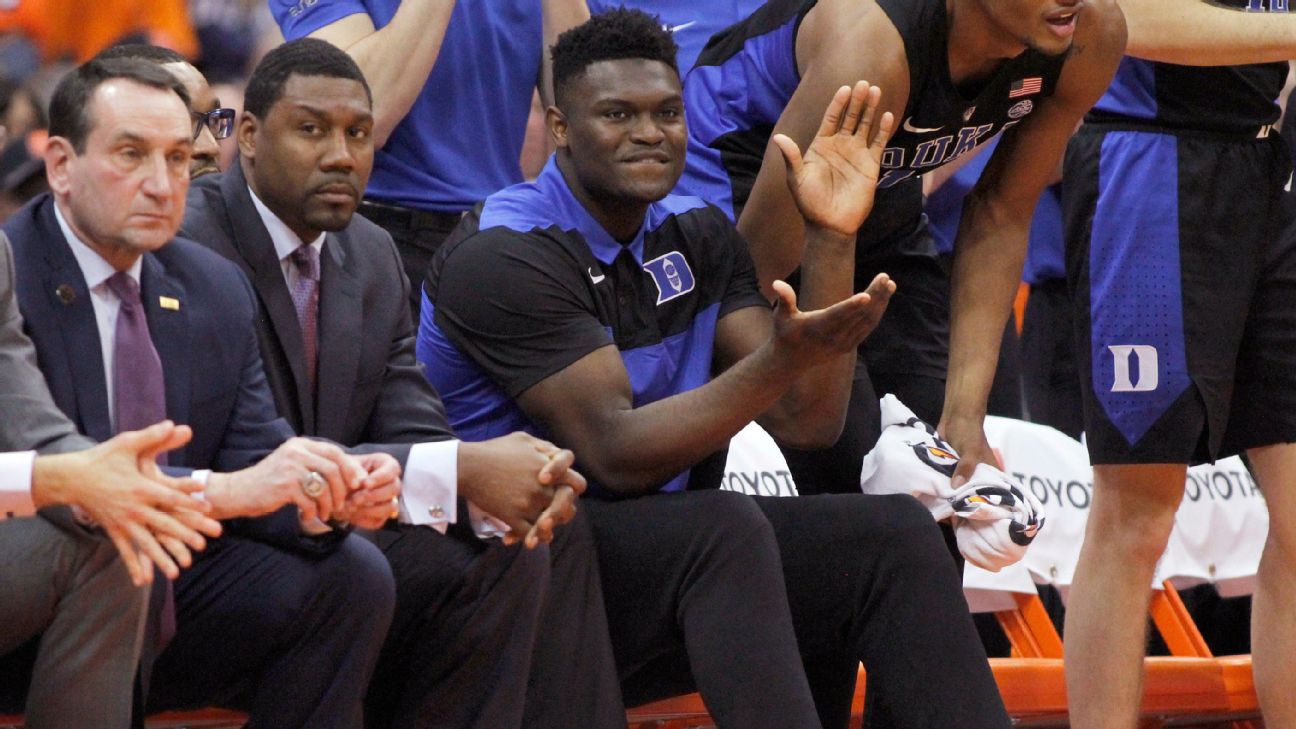 SYRACUSE, N.Y. -- All signs seem to point to the eventual return of Zion Williamson.

Duke coach Mike Krzyzewski said he has not had any conversations with Williamson or his family about shutting down the freshman star and projected No. 1 overall NBA draft pick, who missed Saturday's 75-65 victory over Syracuse with a mild knee sprain.

Krzyzewski also said Duke medical personnel are being cautious and not "rushing" the 6-foot-7, 282-pound star back into action. But Williamson, who traveled with the team Saturday, has told Krzyzewski that he is anxious to return.

"We would never play a kid who's not ready," Krzyzewski said. "We would never play a youngster who didn't want to play. It's not about that. He wants to play. He loves being at Duke. He doesn't like being injured. It's an injury you can get over in a shorter period of time. There's just a protocol that we have to go through to make sure he's completely ready. We're not rushing anything, so that's why we said day-to-day because it's literally day-to-day."

In the locker room, players seemed hopeful that Williamson would eventually return.

Alex O'Connell, who scored 20 points and finished 5-for-8 from the 3-point line against Syracuse, said Saturday's win proved that Duke (24-3, 12-2 ACC) has a strong team even without the Wooden Award candidate.

"As great a player as [Williamson] is, we have a lot of other talented guys on the team," O'Connell said. "This just shows that when he gets back, we'll be an even stronger team."

Blue Devils guard Tre Jones said solving Syracuse's zone without Williamson was difficult. Jones said the team wants him to return, however, only when he's ready.

"He's in good spirits and everything," Jones said. "There's no rush on whatever is best for him. Make sure his health comes first before everything."

Added forward RJ Barrett, who led all scorers with 30 points: "I think everybody had more responsibility. He's a big part of our team and everybody had to step up today. And that's what he did. It's day-to-day. If he's healthy, we hope to have him back. If not, we'll keep going."

Krzyzewski said Thursday was one of the "most difficult" days of his career. That day, he was awaiting Williamson's diagnosis while also trying to figure out the previous night's loss to North Carolina and preparing for Syracuse. Plus, close friend and Syracuse coach Jim Boeheim had been involved in a fatal car accident.

He said he met individually with his players before Saturday's game and told them that they had to be more reliable than they were against the Tar Heels. Krzyzewski said they answered that call, despite having one of the best players in the country on the bench.

"I'm really proud of my team," Krzyzewski said. "That was a really neat thing to see." 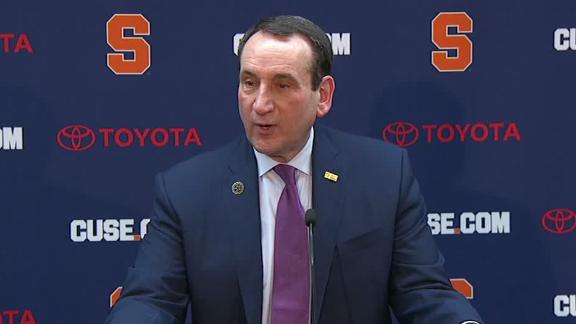