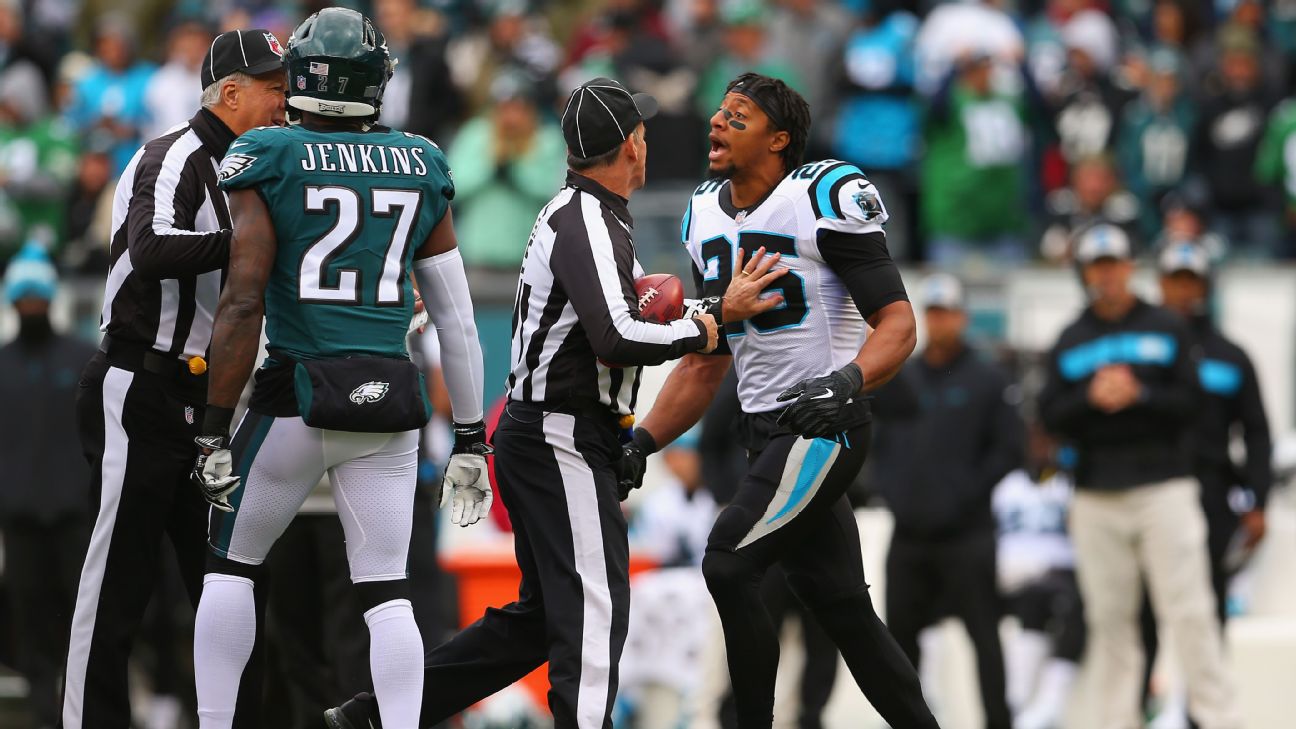 PHILADELPHIA -- Carolina Panthers safety Eric Reid's pregame feud with Malcolm Jenkins on Sunday extended to the postgame, when he called the Eagles safety a "sellout."

Reid and Jenkins have been battling off the field since late last season, when Jenkins, who cofounded the Players Coalition, stopped kneeling during the national anthem after the NFL announced it would donate $100 million to causes considered important to the coalition.

The battle boiled over onto the field before and during Carolina's 21-17 victory in which the Panthers rallied from 17 points down in the fourth quarter.

It started when a Carolina assistant coach and an official had to restrain Reid from Jenkins while the Eagles were being introduced. The two had exchanged words during warm-ups.

Reid then kneeled during the anthem, as he has in his first three games at Carolina to continue his protest of social injustice and systemic oppression. But as Jenkins and captains from both teams went to midfield for the coin toss, Reid charged the field and got into a heated exchange with Jenkins.

Reid, while on defense, continued to stare at Jenkins on the Philadelphia sideline, where Jenkins was standing on the first few series.

After the game, Reid said Jenkins "capitalized on the situation." Reid, the first player to join Kaepernick in kneeling when both played for the San Francisco 49ers, added, "He co-opted with the movement that was started by Colin to get his organization started. It was cowardly. He sold us out."

Both Reid and Kaepernick filed a collusion grievance against the NFL earlier this year, when no team would sign them. Reid landed with Carolina late last month after starting free safety Da'Norris Searcy was placed on injured reserve after suffering his second concussion in a month.

Kaepernick tweeted his support after the game.

At his introductory news conference, Reid said his grievance would continue, and he called the Players Coalition an "NFL-funded subversion group."

Reid and other players withdrew from the coalition in November 2017. Among Reid's concerns was where the funds for the initiative came from.

"In the discussion that we had, Malcolm conveyed to us -- based on discussions that he had with the NFL -- that the money would come from funds that are already allocated to breast cancer awareness and Salute to Service," Reid said at the time. "So it would really be no skin off the owners' backs: They would just move the money from those programs to this one."

Jenkins took exception to Reid's claim, telling ESPN that Reid was well aware of the "scope of the plan."

"The last time we had conversations with [Roger] Goodell and Troy Vincent, Michael Thomas and Eric Reid were on that call," Jenkins said. "They understood the proposal. What we didn't have was a conversation with players in the coalition based on some of the responses that we got from the league. We then talked about myself contacting Troy Vincent just to give them some updates on some of our feedback, which I did."

Jenkins did not get into a war of words with Reid over what happened Sunday.

"I would never get up here and say anything bad about somebody who I know whose intentions were real about helping the community, especially another black man," he said. "So I'm going to leave it at that.

Smith, who does a lot of work with the coalition, disagreed that Jenkins is a "sellout." Despite helping defuse the situation on the field, he stayed out of the controversy after the game.

"I saw two guys showing a lot of love to each other, and I was just being a great guy, giving high-fives," Smith joked.

Carolina coach Ron Rivera said his decision to take Reid out of the rotation in the second quarter had nothing to do with what happened with Jenkins.

"It was just a part of the rotation," said Rivera, who earlier in the week said he wanted to get rookie Rashaan Gaulden some playing time.

Rivera said he "really appreciated the effort" Reid put into the game. Reid initially had an interception in the final two minutes that was overturned by the officials.

"That's a terrible call," Reid said. "I felt my arm was underneath [the ball]. In that situation, as far as I know, it's supposed to stay the call on the field when it's nonconclusive."

Reid also disagreed with the personal foul called against him in the first quarter.

Reid came in on a blitz and threw quarterback Carson Wentz to the ground after Wentz gave the ball to a back. Eagles tight end Zach Ertz went after Reid, and both players were called for personal fouls.

"He ran up on me," he said of Ertz. "They called a personal foul on me? That's a football play."