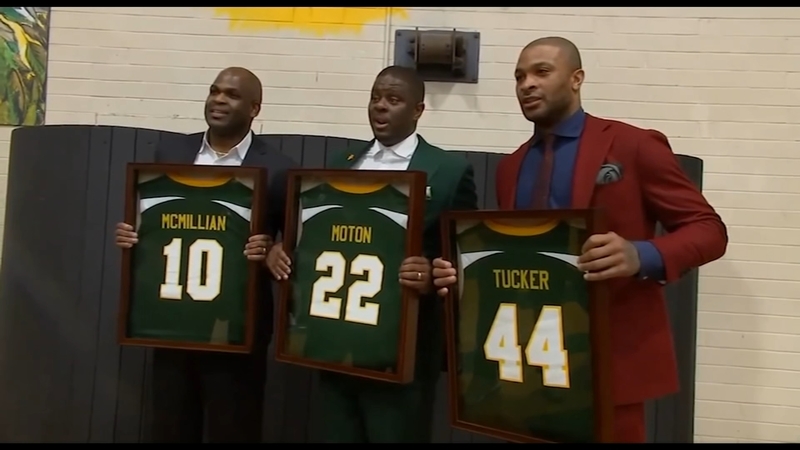 RALEIGH, N.C. (WTVD) -- Led by Trae Young's 48 points, the Hawks took Game 1 of the Eastern Conference Finals against the Bucks, but the battle between Atlanta and Milwaukee is also a full-circle moment for two Raleigh natives.

"The night that we all had our jerseys retired (at Enloe High School), we're sitting there talking and I told them, 'ya'll are going to play in the finals one day, with or against each other,'" said LeVelle Moton, the head basketball coach at North Carolina Central University.

Moton grew up in the same neighborhood as former NC State star and now Hawks head coach Nate McMillan and Bucks forward PJ Tucker -- all 10 years apart -- and now he gets to sit back and watch as McMillan -- who he says raised him and Tucker who he tried to lead the way for -- face one another in the Eastern Conference Finals.

"It's surreal," Moton said. "It lets you know that dreams do come true. Here you have two guys who probably weren't the most talented and gifted individuals, but they fight and they claw their way. They have that chip and they have that edge about them. That's the most beautiful thing to watch them have."

Moton said the one thing that McMillan and Tucker both taught him was resilience, and he hopes young kids watching in Raleigh can learn from them as well.

"I tell them like ya'll are huge inspirations to people you don't even know," Moton said. "Some people are going to tell you that but there are kids back here that are looking at you like, wow, if those two can make it out of these unfortunate circumstances and get on that level then now I have hope and inspiration as well."