The hipster pick for the best line in the NHL 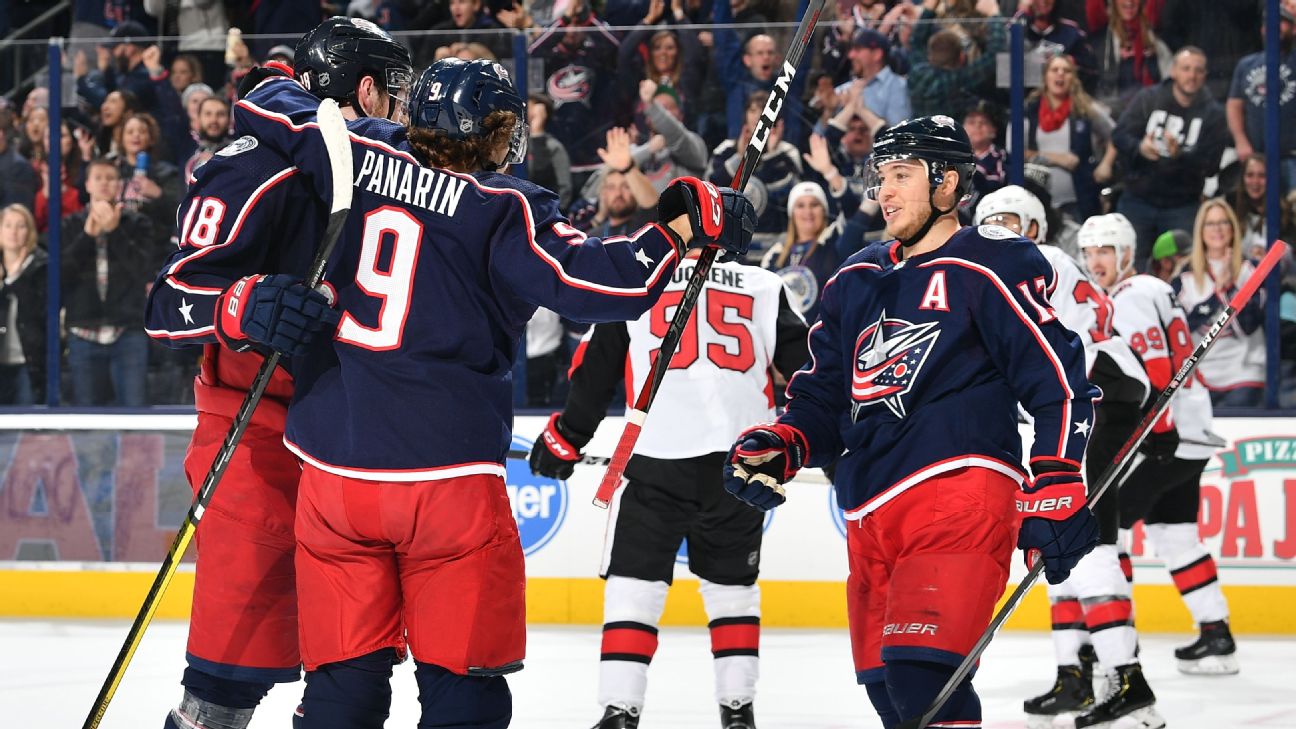 Welcome to a weekly feature we're doing here, where we try to have some fun with underlying numbers. The plan is to highlight a couple of trends, then dig beneath the surface to get a better sense of what they ultimately mean, what's causing them and how likely it is that they'll continue. Think of them as bite-sized deep dives.

In the past, we've used this space to look at things like John Gibson being in a league of his own, how the Islanders have exceeded expectations, and the drama in Dallas. This week, we're going to investigate the seemingly lopsided trade between the Hurricanes and Wild, and reopen the conversation about the best line in hockey.

Earlier this week, my colleagues and I were asked to do a quick blurb on who we thought was the best line in hockey at this very moment. As you'd expect, most of the usual suspects were brought up in the discussion. The most notable glaring omission that we collectively missed out on was the Columbus Blue Jackets' top line, which has been terrorizing the rest of the league since the moment John Tortorella put Artemi Panarin, Cam Atkinsonand Pierre-Luc Dubois together at some point last season.

Despite the fact that they don't get recognition similar to their closest peers -- perhaps because of a combination of the market they play in and relative lack of name-brand value -- there isn't a single forward trio that's combined to score more five-on-five goals than they have. When you throw defense into the equation, the prolific top line in Colorado is the only one currently sporting a more lopsided goal differential:

Just as impressive are all of the underlying shot metrics, which completely and unequivocally validate that dominance, suggesting that they're just getting started. In the timethe trio has spent together on the ice at five-on-five, the Blue Jackets have controlled an astounding 55.4 percent of the overall shot attempts, 57.1 percent of the shots on target and 58.4 percent of the attempts coming from high-danger areas.

It's easy to see why they've been so successful when you watch them. It's a perfect marriage of individual skill sets, all working in unison to create something beautiful. Dubois is a menace around the net, incredibly difficult to knock off the puck. He's hardly just a big body, though it seems almost unfair that someone his size (listed at 6-foot-3, 207 pounds) would also possess his buttery touch.

Atkinson is a pure goal scorer, and he knows precisely where to be to get his shot off at all times. After a disastrous start to last season -- which was particularly alarming considering he'd just signed a mega $41 million-plus extension that had yet to even kick in -- he's been scorching hot since last season's All-Star break. During that stretch of 77 games, he's scored a whopping 44 goals and put the puck on net an even more stunning 310 times.

As good as those two are, and they certainly aren't passengers by any means, the one who makes it all flow smoothly is Panarin. He's a wizard on the ice, as exciting to watch with the puck on his stick as any player in the entire league. He sees things on the ice very few do and attempts to make plays that even fewer would dare. Since coming to Columbus, he's taken his game up another level, proving that he wasn't just a beneficiary of his environment in Chicago during his first two seasons -- that he's actually well-suited for a leading role. In his 125 games with the Blue Jackets, he's 16th in the NHL in overall point production and 15th in primary points. At five-on-five, he's fifth, with 86 points, and only the likes of Connor McDavid, Nikita Kucherovand Nathan MacKinnon have directly factored into creating a higher number of goals.

Put all of that together, and the Blue Jackets have a line that can not only go head-to-head against any of the top lines in the league in the postseason, but actually give Columbus a puncher's chance to make some noise and win a playoff series for the first time in franchise history. The thought of that is so enticing that it's perfectly understandable that GM Jarmo Kekalainen would be willing to take the risk of playing this thing out and seeing where it goes, even if it means eventually losing impending free agent Panarin (and fellow UFA Sergei Bobrovsky) for nothing this summer instead of moving them at the trade deadline.

On Thursday afternoon, we were treated to a good old-fashioned hockey trade. It was a one-for-one swap straight across, with no money being retained either way and no draft picks packaged along with the players. The deal saw Nino Niederreiter being sent to the Carolina Hurricanes, with Victor Rask going back the other way to join the Minnesota Wild.

On the surface, it's easy to see what both teams were trying to accomplish, although the actual execution of it really checks out for only one of them. By doing the deal, the Wild shed some salary, with Rask being owed $12 million total during the next three seasons following this one, compared to the $15.575 million Niederreiter is set to make. Rask is also a couple months younger and plays a more highly sought after position as a center. The issue is that he's also a substantially less-effective player by any objective measure.

Niederreiter has undoubtedly had his share of offensive struggles this season, on an 82-game pace for just 16 goals and 41 points. At five-on-five, he's averaging 1.39 points and 1.07 primary points per 60 minutes, both of which represent a sizable decline from previous campaigns; these rates are about half of what he produced in his career-best 2016-17 season. And yet, as depressed as both of those figures are, they're still better than Victor Rask's averages for his NHL career to date: 1.37 and 0.98, respectively.

The bigger issue here beyond the specifics of either player -- since it's clear that Niederreiter is a superior talent -- is that the trade itself is a classic example by the Wild of how not to handle an asset. By trading Niederreiter at this particular point in time, they were selling him at his absolute nadir, which is immediately evident in the return. It's a cold way to look at things, but the NHL is a business, and being able to carefully manage the value of your assets is a crucial skill.

While Niederreiter himself isn't entirely without blame, the main driving force behind his minus-11 rating for the season is due to factors that are ultimately largely out of his control. Look at how his goalies have performed behind him when he's been on the ice this season, and how it stacks up to his career norms. With an on-ice save percentage like that, it's no wonder he fell out of favor the way he did.

Ironically enough, he was also traded following that historically dreadful 2011-12, largely because of this motley crew he shared the icewith, netting the Islanders just Cal Clutterbuck and a third-round pick in return for a player they'd drafted fifth overall just two years prior. That was truly an unrivaled master class on how not to handle a top prospect.

For the uninitiated, PDO -- a proxy for "puck luck" that is the sum of a player or team's on-ice shooting and save percentages -- is a crude figure that certainly has its flaws. It's often misused as a crutch argument, with a lack of understanding of what it actually means and what's causing its fluctuations. That said, it has some utility in cases like this, because it can go a long way toward quickly identifying why the perception of a player has been flipped on its head the way it has with Niederreiter this season. What's more likely of these two scenarios: that a 26-year-old with a number of strong individual campaigns stacked up consecutively suddenly forgot how to play hockey, or that he's just been the victim of some unfortunate bounces over the course of a 50-game sample?

Carolina is betting that it's the latter, banking on countless past examples over the years. It's a smart, calculated risk for them to take because the upside is awfully high when (not if) Niederreiter returns to his previous form. It's especially smart considering the relatively low price they had to pay to make that wager.

Not only do the Hurricanes make out like bandits here, but the rich also get richer in a sense. A team that's been an absolute nightmare to contend with at five-on-five this season -- Carolina is second in shot share and first in expected goals -- now adds a player who has historically been a strong possession driver in his own right. Over the course of his six seasons in Minnesota, the Wild controlled 53.3 percent of the shot attempts and 56.1 percent of the goals scored at five-on-five whenever Niederreiter was out on the ice. That was 5.4 and 4.6 percentage points better relative to what his teammates did without him, respectively.

If the Hurricanes can continue to drag their shooting percentage out of the early-season gutter and turn a higher percentage of that high volume of attempts into goals, then look out. An already crowded Eastern Conference playoff picture might just be adding another viable threat.