The imperfect joys of the Carolina Hurricanes 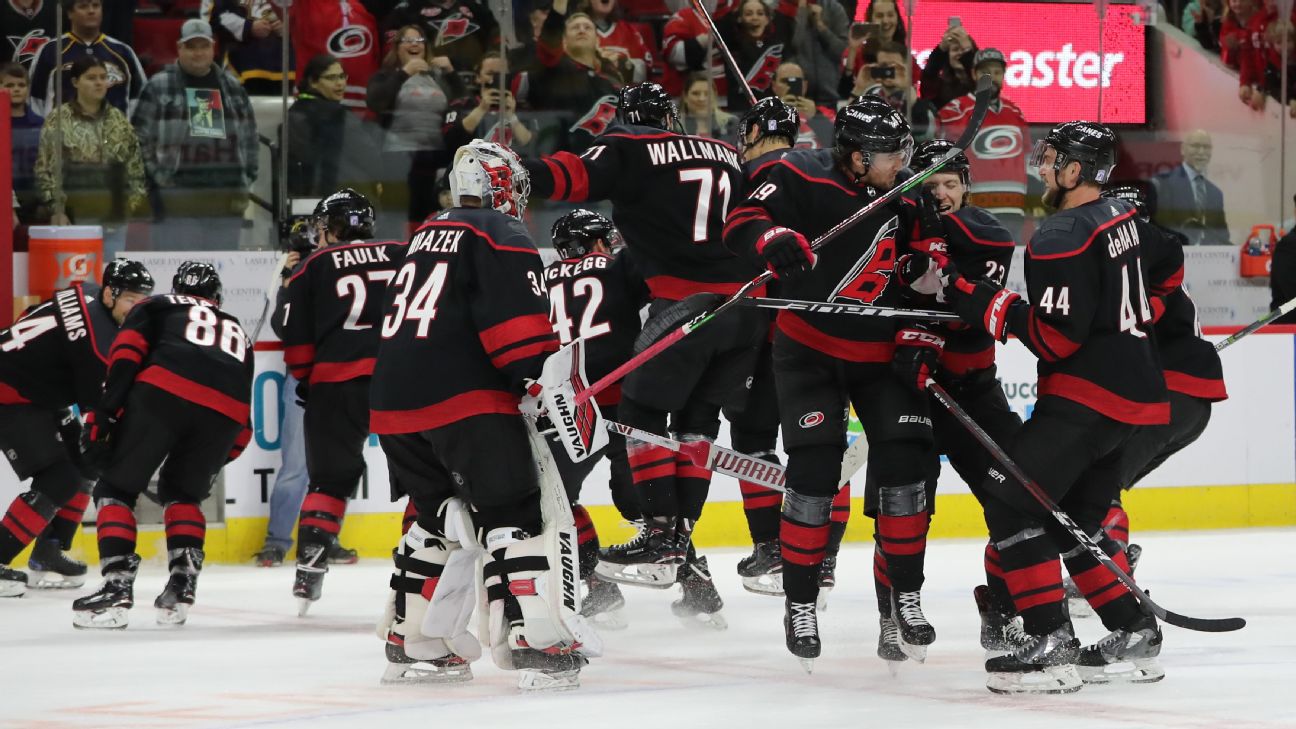 ESPN
By Greg Wyshynski
The Carolina Hurricanes flooded the ice after a 4-3 victory over the Buffalo Sabres. It was an emotional win on several levels -- extending their hot streak, beating a team they were chasing, ruining the homecoming for former teammate-turned-Sabres scoring leader Jeff Skinner-- and the time had arrived for the Hurricanes to punctuate that home victory with one of their infamous "Storm Surge" choreographed celebrations for the fans who stuck around for it.

One problem: The Hurricanes forgot to plan one.

Captain Justin Williams said the team brainstorms these celebration ideas during the week, and they're pitched to him, like the NHL's version of Lorne Michaels mulling sketch suggestions from his cast members. "I tell them to bring them in to me. There's no idea too stupid. But you don't want to be too corny," he told ESPN recently.

So, absent a planned celebration, defenseman Jaccob Slavin offered an alternative. "Let's just do the bowling thing," he said, referencing an idea that had come up before.

The Hurricanes began leading the crowd with rhythmic clapping, forming a triangle at center ice. Williams skated across the blue line, turned, took off his helmet and ... bowled a strike.

THIS IS HOW WE ROLL pic.twitter.com/t0AzatCrFn

"No one took the initiative to be the bowler, so I decided to do it," said Williams.

It was a moment of shambolic joy, in keeping with the overall theme of this Hurricanes season. They're messy, they're unpredictable, they're somehow both impressive and disappointing, sometimes in the same period. Yet through 49 games, they're six points in back of the final wild-card spot in the Eastern Conference heading into Wednesday's game against Vancouver (10:30 p.m. ET on ESPN+), which wasn't something that looked likely during a 3-8-2 stretch back in December.

"Lately, there's been a little bit more of an awakening. Quite honestly, from where we were a couple of weeks ago ... we're hockey players. We're proud guys. It was embarrassing where we were at," Williams said. "With the talent we have, and the position that we felt we should be in, it wasn't close to where we were. And we're not quite there yet. But we're trending in the right direction. We're not going backwards. We're going forward."

Every season, it seems like there's an anchor that holds the Hurricanes back from lurching forward -- they have failed to make the postseason since 2009. Usually it was goaltending; this season, it's their offense, which ranks 27th, at 2.73 goals per game, and features an embarrassingly low 7.6 shooting percentage, the lowest in the NHL.

First-year coach Rod Brind'Amour said it's a "tough one" when asked about his team's offense.

"I got frustrated with it," he said. "People said we just shot the puck from wherever. What they should have done is dug in more and looked at the grade-A chances. Because that's what we track. We don't track shots on goal. We track chances for and chances against. We were way higher earlier in the year, us vs. them. Now it's leveled off and we're scoring more."

But the number of impact players offensively remains limited.

"When you look at our group overall, I don't think we're the most talented group. I think everyone would agree on that," Brind'Amour said. "We have a couple of really nice players, and then we have 'the rest.' And maybe 'the rest' need a few more shots to put the puck in the net. That's how we knew we were going to be built. I don't think we anticipated the first 25 games would be that low. But now our last six or seven games, all of a sudden it's leveling out. And you're like, 'This is what should have happened early in the year.'"

Brind'Amour replaced Bill Peters last summer after Peters opted to leave the Hurricanes to give new owner Tom Dundon and general manager Don Waddell a chance to "get their own guy" as coach. "Roddy's a good man. He's as good as they come," Peters said on Wednesday. "He's been in that organization for a long time, and he's worked his way up. It'll be good. They've got a good young team there.

There's a lot Brind'Amour couldn't anticipate in his first season behind the bench. Like losing dependable veteran center Jordan Staal to injury, limiting him to 29 games. Or having center Victor Rask score one goal in 26 games after returning from injury, before he was shipped out to Minnesota for Nino Niederreiter. Or that defenseman Dougie Hamilton, a prized acquisition in the summer from the Calgary Flames, would struggle to find his game.

"I have to figure out how to get more out of him, because it's all there," said Brind'Amour of Hamilton. "He's the total package. What's tough on our team is that our team is very deep at that position. It's not great for him, but it's great for us. He puts a lot of shots at the net, but in years past those went in."

One thing he did anticipate was the progression of rookie Andrei Svechnikov, the 18-year-old No. 2 overall pick in last summer's draft. He has 12 goals and 10 assists in 49 games. While his lofty status might have had some assuming more offensive dominance, his coach wasn't willing to overestimate his rookie potential.

"Love the kid. It's the perfect storm: He works hard, and he wants to get better. Sometimes he works too hard. He puts a lot of pressure on himself. He thinks he should be scoring 30 goals, and it's not that easy," Brind'Amour said. "The hard part for him is that he's never been taught how to play defense, because every team he's ever been on he's had the puck. They didn't worry about him messing up. It's not like that in the NHL. He's had to learn on the fly as an 18-year-old, and that's tough."

But there have been pleasant surprises, too. Sebastian Aho, 21, has not only blossomed into a star but has also become the top-line center the team has long coveted.

"We knew right away he was a competitor," Brind'Amour said. "Now, I didn't think he was going to take off as he has, but from the moment we first saw him, I knew he wanted to win. And last year I saw it: He hated losing more than he likes winning. And that's the kind of people you want. Winning is supposed to happen. Losing isn't."

It's a mentality Aho shares with his coach, who was a ferocious competitor during his NHL career. Conveying that message to the locker room is Brind'Amour's consigliere Justin Williams, whom he playfully refers to as "our old guy" in the room.

"I'm very familiar with Rod, and he's very familiar with me. We haven't been together as player and coach for a long time, but we've known each other for a long time," said Williams, 37. "As a captain, you have to convey the messages that the coach is sending, and convey them throughout the team. You have to make sure everyone is on board with it, because if someone is off board, then the train isn't running smoothly."

Where this train is headed is anyone's guess, but Williams feels the momentum has turned in the Hurricanes' favor.

More puck luck means more goals. More goals mean more wins. More wins mean more of those celebrations that enchant the fans and tick off the hockey establishment ... although Williams agreed that the "Storm Surge" might not have flown back in 2000 when he started in the NHL with the Philadelphia Flyers.

"I think you evolve in everything you do. Is this something that would have happened 18 years ago when I broke into the league? Probably not. But with all the young players in the league, and more fan engagement, and more social media, it just seems like the next step to go," he said. "People either like it or they don't. And that's fine. We certainly don't see anything wrong with it."

Brind'Amour said he hasn't received any negative feedback from friends or peers about the Storm Surge. "I don't have a favorite one. But my young guy ... this is what people don't talk about with [the celebrations]: The young fans, at least in Raleigh, they're loving this. And they're taking it into their games. And that's what you want to do: Build the next generation of hockey fans," he said.