The realest thing in hoops to start 2019: There might be just one Pac-12 team in March 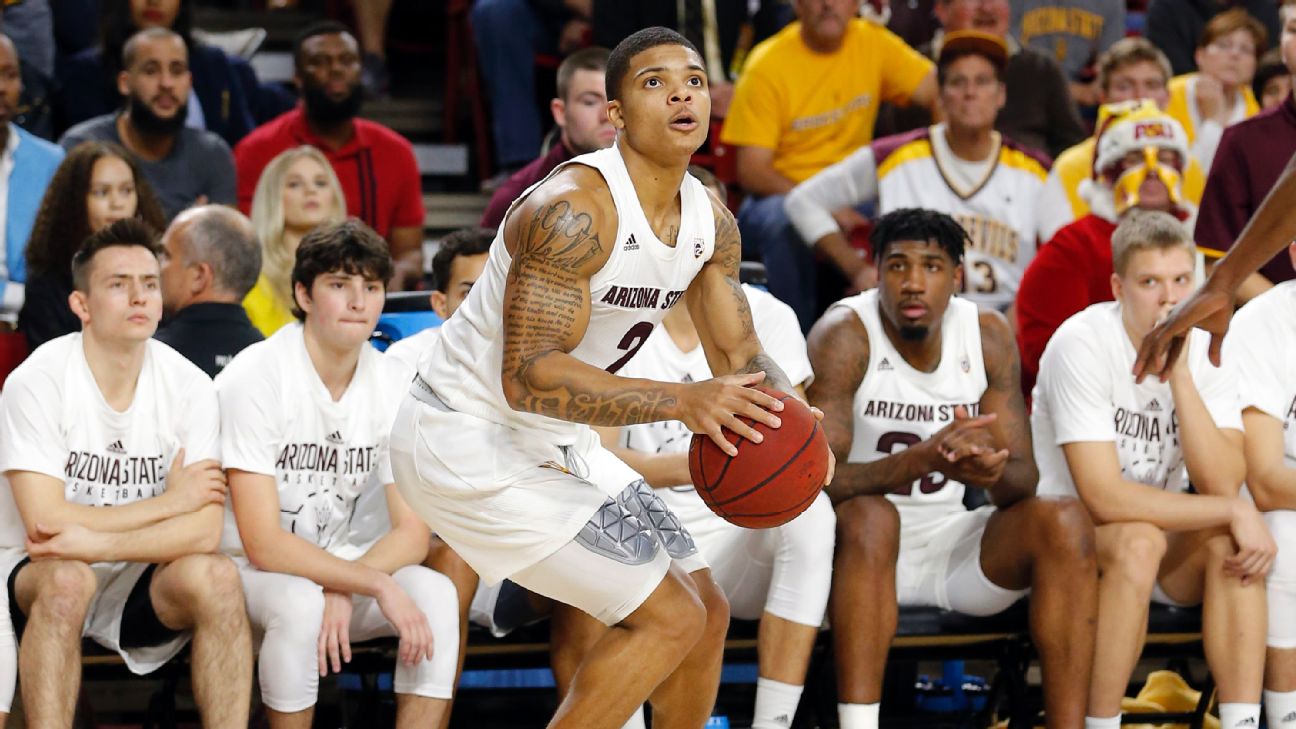 Although the NCAA tournament selection committee does not consider conference affiliation, the strength of teams in any league impacts the number of signature victories available in conference action. That means it's good to play in a league full of good teams.

If your team is in the Big 12, Big Ten or ACC, you'll be glad to know that it will probably be raining at-large berths on Selection Sunday. If you're a fan of the Pac-12, however, you can probably RSVP for that wedding in March that you weren't sure you'd be available to attend because you thought you'd be following your favorite team in the NCAA tournament.

Here's what's real and what's fake in college basketball at the start of 2019.

You know when something happens or someone leaves in a sitcom, and the show continues for an awkward season anyway? Like when Steve Carrell left "The Office" and was replaced by James Spader? And we all pretended it didn't happen?

That's how every coach in the Pac-12 feels about November and December. If they could all simply Control+Alt+Delete the first two months of 2018-19, they would, because they're about to enter Pac-12 play fighting to secure what could be a nonexistent at-large berth in the NCAA tournament.

There are no guarantees for any team in this league except the winner of the conference tournament.

How rough was the end of 2018 for the Pac-12? After a 3-6 stretch in its past nine games, UCLA fired Steve Alford on Monday. Arizona State followed a win over then-No. 1 Kansas with a home loss to Princeton on Saturday. Oregon has just two top-100 NET wins (Syracuse, San Diego) and a loss to a Texas Southern team ranked 175th. Washington went 0-4 against Auburn, Gonzaga, Virginia Tech and Minnesota. Arizona's best win is a victory over an Iowa State team that was missing three key players in the Maui Invitational.

Those are the best squads in the league.

For the first time in seven years, the Pac-12 entered the week without a team ranked in the latest AP poll. No Pac-12 team was ranked in the top 40 of the NCAA's new NET rankings on Tuesday, either.

Only three Pac-12 teams reached the NCAA tournament a year ago, but the league might need a miracle to match that this year.

The one-bid scenario for Pac-12 will become even more realistic if Arizona State pulls ahead of the pack and wins the conference tournament. Wins over Kansas and Mississippi State give Arizona State the most favorable path to the NCAA tournament. Still, the Sun Devils can't afford a mediocre season in a weak conference. And how will Oregon, Arizona and Washington pick up signature victories between now and Selection Sunday?

The Pac-12's other problem? Mid-majors such as Buffalo (wins over West Virginia, Syracuse) could turn the MAC into a two-bid league, depending on what happens in the league's tournament. Could a team such as San Francisco or Saint Mary's steal a win or two from Gonzaga and enter the at-large conversation? What if Utah State ends Nevada's unblemished season?

Those scenarios could increase the bids for those overlooked leagues and impact struggling conferences such as the Pac-12.

It wouldn't be shocking if Dukefails to win the ACC

In the 2014-15 season, a Duke team that would eventually win a national title won its first 14 games, a stretch that included wins over elite Michigan State and Wisconsin teams. Four games into the ACC slate, however, panic ensued after a freshman-led Duke squad sported a 2-2 record.

The grind of the conference season is an arduous adjustment for young players. This talented Duke team will face the same hurdles in a stacked ACC.

The Blue Devils, led by four freshmen, have not played a true road game this season. They'll play two road games in the first 10 days of their ACC season. Their journey to an ACC crown will feature matchups against a Virginia squad that's playing top-five defense, a Florida State team that recently welcomed back Phil Cofer (the team's leading scorer, at 12.8 PPG, last season), a Virginia Tech team that has made nearly 45 percent of its 3-point attempts, an NC State team with a win over Auburn and a good North Carolina squad that beat Gonzaga a few weeks ago.

That 2014-15 Duke team finished second to Virginia in the ACC, weeks before its run to a national title. Duke could encounter a similar fate this year. The ACC is a gauntlet. Don't let the hype fool you. America's No. 1 team might not win this talented conference.

The Big Ten will own Selection Sunday

The Big Ten is fun again. Last year, just four teams from the Big Ten secured invites to the NCAA tournament. It was the league's lowest tally in a decade. Joe Lunardi's latest bracketology, however, features 10 Big Ten teams. It's an attainable sum for a league that has bounced back.

In its most fruitful years, the Big Ten's coaches have touted a "there are no bad teams in this league" mantra. You'll hear more of that in 2018-19, with 10 Big Ten squads ranked in the top 50 of the NET rankings.

Illinois, at 4-9 with losses to Florida Atlantic and Georgetown, is not good. But even Rutgers (7-5) has a win over Miami (Fla.). The rest of the league? All potential NCAA tournament squads.

Michigan, Michigan State and Wisconsin are the top contenders, a trio of teams that will attempt to end the Big Ten's 20-year national championship drought. But the meat of the league is the story.

Eric Curry, who missed the first two months of the season due to injury, is back to enhance a strong frontcourt for Minnesota. Ohio State is playing top-25 defense. Romeo Langford is averaging 17.5 PPG for an Indiana squad that hasn't lost since the ACC/Big Ten Challenge. Carsen Edwards is a Wooden Award candidate. Iowa has wins over Iowa State and Oregon. Maryland is one of the top offensive rebounding teams in America.

Forget last season. The Big Ten will restore its reputation this season.

The Big 12 is weaker after losing so many stars

The lie detector test determined that was a lie.

The Big 12 doesn't have a marketable superstar. Last year, Trae Young, Jevon Carter, Devonte' Graham, Zhaire Smith and Mo Bamba boosted the national hype that surrounded the conference. Without them, the Big 12 hasn't enjoyed the same national buzz in the first two months of the season. And that's unfortunate.

Eight Big 12 teams are ranked within the top 50 in adjusted defensive efficiency on KenPom.com. Oklahoma has held opponents to a 40.6 percent clip inside the arc, a top-10 mark. TCU has five players averaging double figures. Texas Tech has the nation's best defense and a future first-round pick named Jarrett Culver. Lindell Wigginton, an NBA prospect who missed the first two months of the season with a foot injury, is back for Iowa State. Losing Dean Wade to another foot injury hurts Kansas State, but the Wildcats made a run to the Elite Eight last season with Wade sidelined. Texas is all over the place, but the Longhorns have a legit top-10 defense. Baylor and West Virginia are both struggling, but they're also better than the bulk of the Pac-12. Oklahoma State is 6-6, but its record features a win over LSU.

And Kansas is Kansas.

It's more difficult to name five guys on each Big 12 roster this season. But another 70 percent-level representation in the NCAA tournament is a real possibility for a league that's No. 1, albeit quietly, in KenPom.com's league rankings.

It's the Volunteers ... and everyone else in the SEC

The Vols were picked to finish at the bottom of the SEC last season, but they made every doubter look foolish when they shared a slice of the league's crown with Auburn.

Now they're the favorites, with Grant Williams and Admiral Schofield positioned to contend for the Wooden Award.

But the Vols have serious competition in the SEC, beginning with an energized Kentucky Wildcats squad.

In the past two weeks, Kentucky has jumped nearly 30 spots to become a top-30 team in adjusted defensive efficiency on KenPom.com. Plus, the Wildcats proved that they can handle a versatile team when they dominated North Carolina in the CBS Sports Classic. The Wildcats are rolling, so much so that the 34-point loss to Duke in the Champions Classic now feels like a weird season opener that will have no bearing on the outcome of a rematch.

Auburn's Jared Harper (14.9 PPG, 41.2 percent from the 3-point line) leads a Tigers defense that has forced turnovers on nearly 30 percent of its opponents' possessions, the top mark in America and a number that exceeds anything Bob Huggins' Press Virginia teams ever achieved.

Mississippi State is a real sleeper, and Aric Holman, a 6-foot-10 forward who has made more than 40 percent of his 3-point attempts, is the league's most perplexing matchup. LSU is an imbalanced group with an offense that can keep pace with any team in the league. Florida is a top-10 defensive team that just beat Butler by 34 points.

The SEC does not have last year's depth, it seems. But its top four or five teams are stronger.

The Power 5 races are the only conference races worth watching

In reality, problems in the Pac-12 have helped to highlight the talent in some of the other leagues around the country -- races you should pay attention to. Gonzaga should run away with the West Coast Conference title again, but its matchups against BYU, Saint Mary's and San Francisco could be more competitive than most anticipate. In the Mountain West, Nevada will try to finish the regular season without a loss. But that league is filled with hostile venues, and three of Nevada's first five league games are on the road.

Villanova might fail to dominate the Big East as it has in recent years with this season's heated race for the title. Markus Howard, a top-five scorer nationally, and Marquette are a threat. Seton Hall, which has wins over Maryland, St. John's and Kentucky, is in the mix, too. Creighton has connected on 43 percent of its 3-pointers and does not have a bad loss on its résumé. Shamorie Ponds (18.7 PPG) leads an intriguing St. John's team.

Dan Hurley will attempt to guide UConn into the mix in the American Athletic Conference. The University of Central Florida, Cincinnati and Houston could all stage an entertaining battle at the top of the league.