Tony Grimes' decision: Breaking down the options for college football's No. 6 recruit 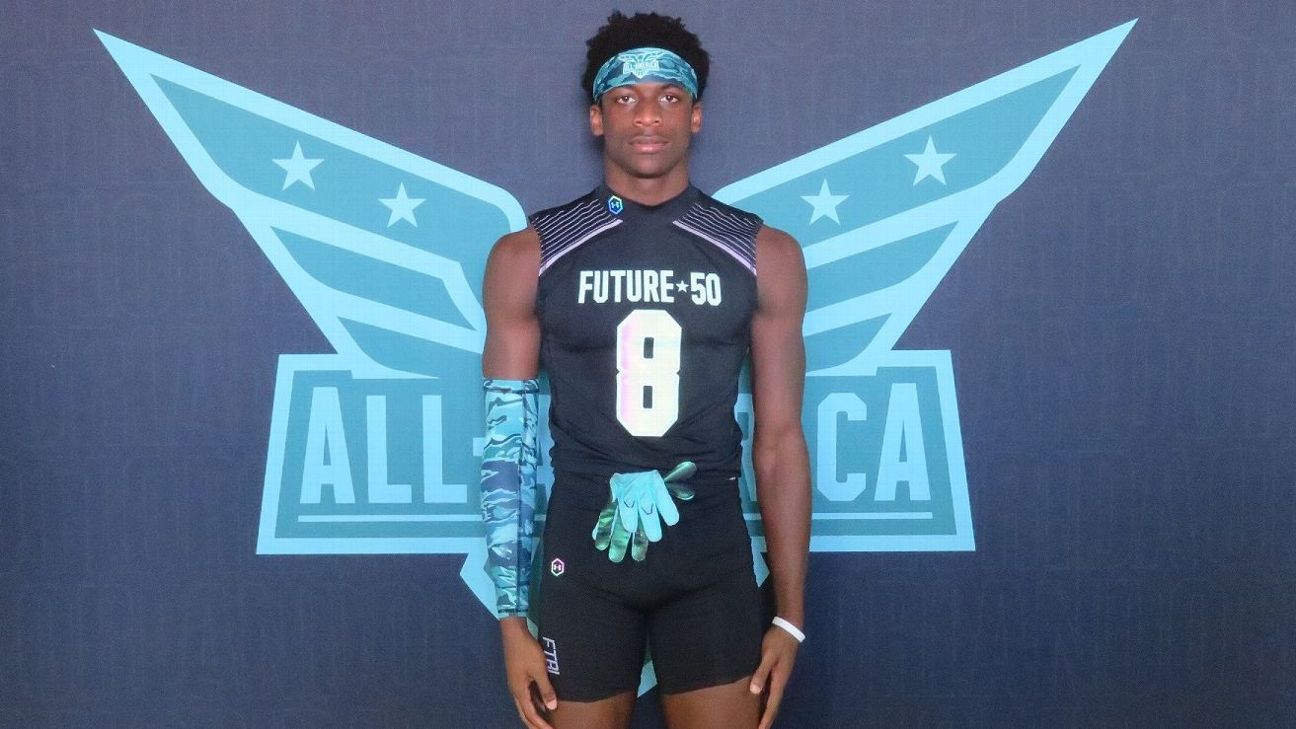 Five-star cornerback Tony Grimes will announce his college decision Tuesday at 5 p.m. ET. His decision will be broadcast on Instagram live through ESPN, and Grimes will choose from his top list that includes Georgia, North Carolina, Ohio State and Texas A&M.

Grimes is a 6-foot, 180-pound cornerback out of Princess Anne High School in Virginia Beach, Virginia. He's the No. 6 overall prospect and has scholarship offers from the biggest programs in the country.

Grimes has had a recruitment that has gone back-and-forth between his top four, but he said he has made his decision. To preview his choice, Grimes gives us a look at what he liked about each school in his top four and why each made the list. We also take a look at how his commitment would impact each school and offer a scouting report on what Grimes brings to the table.

One of the most versatile two-way prospects in the 2021 class. Grimes is one of those kids you could line up at any skill position and he would be a matchup problem. He is a dangerous ball carrier on offense, but we project him at corner because it's a value position and he has coveted length on the perimeter. The ball skills and playmaking ability he displays on offense will make him a dangerous defender. -- Tom Luginbill

Breaking down his finalists

Georgia: "Georgia offered early, but not as early as expected. It was like a one-and-done for Georgia with my first visit. What I mean by that is if I went there and I didn't like it, they weren't going to be in my top list. But then I went there and I fell in love with Georgia.


"The coaching staff, Coach [Kirby] Smart, Coach [Charlton] Warren. Coach Warren is amazing, he's an excellent defensive backs coach. Coach Kirby, he knows his scheme, he knows how to coach and he knows how to win. When you know how to win, it's an amazing program to be a part of."

What his commitment would mean for Georgia: The Dawgs have the No. 14-ranked class overall right now with only nine total commitments. That is the least amount of commitments of any team in the top 15, so landing Grimes could help Georgia build momentum with its remaining top targets. Georgia doesn't have any cornerbacks committed in this class but did land three ESPN 300 corners in the 2020 class, including five-star Kelee Ringo, who was the No. 1-ranked cornerback in the class. You can always use versatile athletes on defense, but Georgia has plenty of young options at corner if Grimes goes elsewhere.

North Carolina: "I was actually at Texas A&M on a visit when North Carolina called. Coach Dre [Bly] actually called my dad and gave me the offer, and since then, me and Coach Dre have been talking a lot.

"I got to meet Coach Mack Brown, and Coach Mack Brown is a legend. He wins. He has titles on his belt. Coach Mack Brown is an amazing head coach, he's a winning coach and has a winning program. They got Jay Bateman, and he's an amazing defensive coordinator. Did you see the game they put on Clemson? Since Dre is from the area, there's a lot of connection there, because he did it from the area, he went to college and he did it, and then he went to the league and he most definitely did it. So with him there, I know I could do it and more."

What his commitment would mean for North Carolina:Brown is trying to build a championship-caliber program at North Carolina, and landing elite defensive prospects is a great way blueprint to get to the College Football Playoff. Brown and his staff signed five-star defensive end Desmond Evans in the 2020 class, ESPN 300 defensive linemen Myles Murphy and Kedrick Bingley-Jones, as well as ESPN 300 safety Ja'Qurious Conley. The staff has seven ESPN 300 defensive prospects committed in the 2021 cycle, including five-star defensive end Keeshawn Silver. Brown already has his quarterback in Sam Howell, so adding elite players on defense to a class that is already ranked No. 4 overall would help balance this team out and push this roster to where Brown wants it to be.

Ohio State: "Every other school said they're DBU, but Ohio State is officially DBU. When they got Kerry Coombs, Kerry Coombs coached all the top defensive backs from Jeff Okudah to Marshon Lattimore, Denzel Ward and more.

"I'm thinking in my head, 'If he can coach them up that list, I know what he can do with me.' Ohio State, I love them. Coach Ryan Day is an amazing head coach; my cousin, Teradja Mitchell, is there; I got TreVeyon Henderson who is committed there, as well. Ohio State is a lovely program to play for."

What his commitment would mean for Ohio State: The Buckeyes have been producing NFL-caliber cornerbacks for the past few years and are going to have an excellent secondary again in the 2020 season. The staff didn't have any ESPN 300 corners in the 2019 class but did add ESPN 300 corners Ryan Watts and Lejond Cavazos in 2020. The staff has only ESPN 300 corner Jakailin Johnson committed in 2021, so adding in someone as talented as Grimes would help restock the cornerback room with an elite prospect. It's not dire to add Grimes to this class, but with only three cornerbacks on the roster who are freshmen or sophomores, it would be a big boost to the future depth.

Texas A&M: "Usually, Texas A&M doesn't offer cats from our area, so it was a big-time offer from them. Me and the old defensive backs coach, Christian Parker, were excellent. We were so close, and everything connected with us. So when I went down there for a visit, I felt like it was home. Me and Jimbo [Fisher] had an amazing talk; Coach [Mike] Elko, he knows our guys from the 757 because he had a lot of them when he was at Florida State.

"Since CP left, Texas A&M went downhill a little bit, but then they got T.J. Rushing, and me and T.J. Rushing have been hitting it off pretty good. I most definitely think T.J. Rushing can coach me and make me ready for the next level."

What his commitment would mean for Texas A&M: The Aggies have the No. 22-ranked class overall and only 10 total commitments in the class. Texas A&M finished with the No. 6-ranked class in the 2020 cycle, so landing someone such as Grimes in this class would be a big help to get the class moving in the right direction. The staff was able to land ESPN 300 corner Jaylon Jones, the No. 3-ranked corner in the 2020 class, and ESPN 300 corner Erick Young in 2019. To be able to pair Grimes with Jones and Young would be an outstanding secondary with length and athleticism. The Aggies ranked 41st in pass yards allowed per game and touchdowns per pass attempt last season. Adding in Grimes would be a big step toward building an elite secondary to help get this program to where it wants to be.
Report a correction or typo
Related topics:
sportsespnnorth carolina tar heelsohio state buckeyescollege footballtony grimesgeorgia bulldogsdailytexas a m aggiesfootball recruiting
Copyright © 2020 ESPN Internet Ventures. All rights reserved.
More Videos
From CNN Newsource affiliates
TOP STORIES