Zion Williamson's preparation and preservation have no precedent 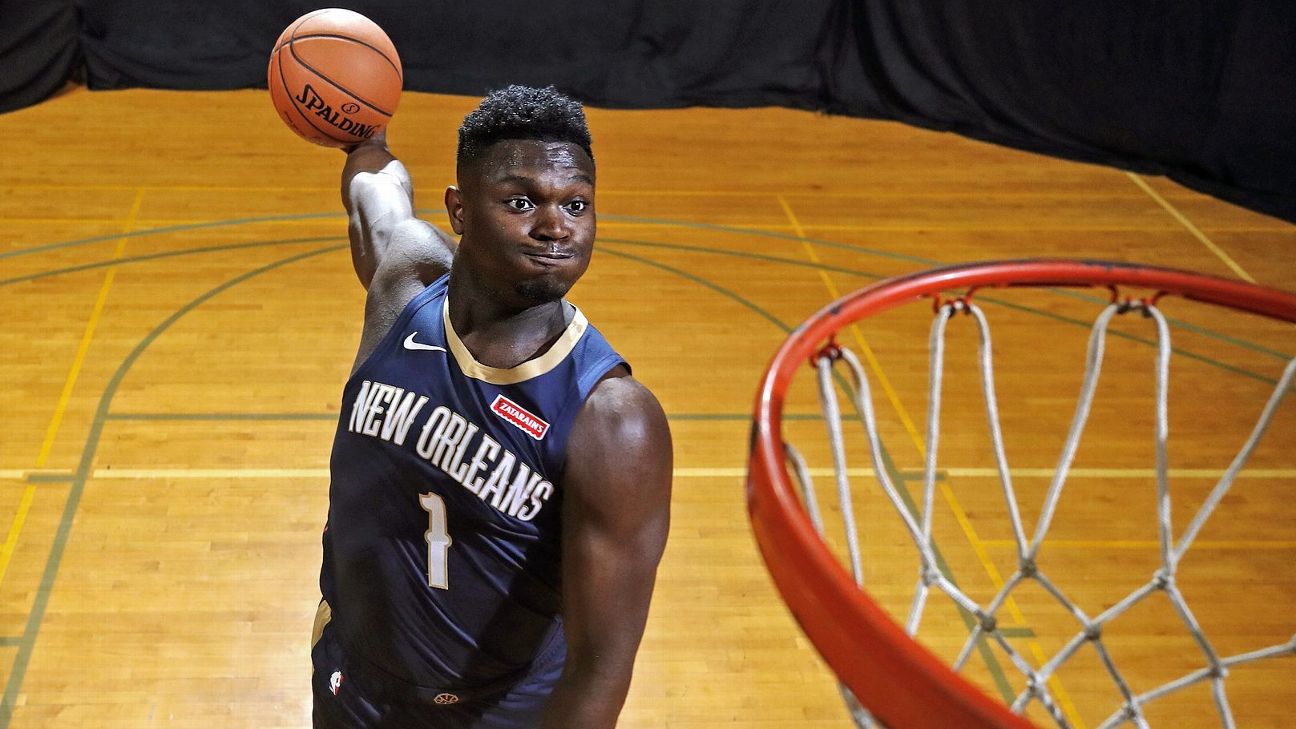 ESPN
By Baxter Holmes
DEEP UNDER THE Staples Center basket, cameras are held aloft, each lens moving in unison like starlings in murmuration. Nearly two dozen digital eyes are trained on the vending-machine-sized forward warming up, and each time he drives to the hoop, the crowd of onlookers beneath the basket parts to make ample room.

Also looking on before this early January matchup against the Los Angeles Lakers are athletic trainers for the New Orleans Pelicans. They watch the distance between Zion Williamson's steps and whether he's waddling or taking longer strides. They watch to see whether he's moving on the balls of his feet or transferring more force closer to his toes. They prefer the latter in both instances, says one league source close to the team.

The Pelicans watch the positioning of his feet, ankles and knees as he lands after one of his seismic leaps.

And they're hardly the only ones in the NBA studying young players for flaws.

"By the time you get them, they don't have any movement patterns that are worth a s---," says one veteran trainer for a Western Conference team. "It's unbelievable."

Says one NBA general manager, "They're more damaged when they get to us than they ever were before. They've got way more trauma to their bodies."

Dr. Mike Clark, who was formerly the Phoenix Suns' physical therapist for 14 seasons, describes younger players today as having powerful Ferrari-like engines, but with the brakes and suspensions of a basic sedan. And one Western Conference NBA general manager says that there might be no player in the league who has a more powerful engine than the team-listed 6-foot-6, 284-pound Williamson. The massively hyped No. 1 draft pick presents the sort of challenge to NBA trainers that is common among today's young players, but one that is exaggerated because of a body type far more common on an NFL defensive line than a basketball court.

And as Williamson now engages in practices and is set to debut on Wednesdayafter right knee surgery on Oct. 21, the spotlight is shining on what the Pelicans are doing to care for a prized asset that they hope will become a franchise star.

"Everyone's going to have their own opinion," Pelicans forward Josh Hartsays. "No one knows him personally. Not a lot of people know his rehab process. They don't know anything like that."

So the Pelicans watch. And they preach small details.

"He's not quick for a big guy," New Orleans GM David Griffin says. "He's quick for quick guys. That's a really big deal when you're talking about the amount of torque you generate."

Back on the Staples Center sideline, Griffin watches Williamson. When Zion begins exploding toward the rim and throwing down two-handed slam dunks, fans flock to the Pelicans' half of the court.

"He's doing s--- from a physics perspective that no one else does," Griffin says. "It's fascinating to me. We've learned more during this process than we've taught him."

That process is Williamson's rehabilitation and return-to-play protocol. And while conventional wisdom suggests that the best way to keep Zion injury-free is for him to lose weight -- to lighten the load on his lower extremities -- a new yearslong study suggests that it isn't quite that simple.

ON A HOT August weekend in 2017, three officials from P3 Applied Sports Science wove through 20 miles of Houston's morning traffic to a cavernous gym where they believed they were going to witness the equivalent of a space shuttle launch in human form. P3, a Santa Barbara, California-based sports performance laboratory, has assessed thousands of athletes and almost 600 NBA players over the past 13 years, but jaw-dropping internet highlights from Williamson, a teenage sensation, had piqued the curiosity of even its longtime staff.

Once there, they affixed to him 22 spherical markers, each the size of a small marble, on his hips, knees and ankles. He stood atop two force plates designed to record ground-reaction forces. Williamson was shirtless, wearing compression tights and sneakers, and he stared up at a vertical leap ladder -- the kind used at combines to measure how high players can fly.

Eight high-tech cameras were positioned around Williamson while the officials huddled around a laptop where results would appear in real time.

Without taking a step, Williamson crouched, preparing for takeoff, then swung his arms high, powering upward.

A chart spiked on the laptop as his tanklike frame continued to rise in the air, ultimately putting 33 inches of space between his sneakers and the floor.

On its own, that figure registered as one of the best standing vertical leaps P3 officials had seen -- not far from Andrew Wiggins' P3 record of 36 inches.

"No one with his body type gets up there," he says today, rewatching the jump.

Later in the session, Williamson completed what is known as a box jump, in which he jumped down from an 18-inch box before quickly leaping as high as possible. When he did, those force plates recorded that he had created 4,900 newtons worth of force -- about twice the amount needed to crack a brick with a karate punch. It was also the highest such figure the P3 officials had ever seen.

Says Dr. Marcus Elliott, founder of P3: "Zion has the highest peak force of any athlete we've ever assessed -- and he was still in high school."

AT THE END of the 2018-19 regular season, P3 completed a five-year study of 481 NBA players it had evaluated in the hopes of understanding one thing: What are the biggest factors that can lead to serious knee injuries?

After combing through at least 500 variables, officials were surprised to learn that four stood out as driving the majority of risk -- and to learn how different those first three variables were compared to the fourth.

The first three focused on mechanics -- how the foot rotates over the course of a jump; how the femur rotates relative to the shin; and the ability to control landing from a jump using the hips.

The fourth factor, though, could determine the fate for the most exciting NBA prospect in a decade: mass.

What they found had defied conventional wisdom: mass has no independent relationship to risk of injury. Rather, it serves as a multiplier for the other three factors. So when Zion Williamson told ESPN on Dec. 25 that the Pelicans were tweaking how he walks and runs, the aim was to manage the first three variables in order to control for the fourth.

"If Zion's mechanics are clean," Elliott says, "then I'll take him all day with his weight."

Veteran NBA trainers say today's young players often have stiff and inflexible hips that keep them from squatting and hinder their lateral movement -- and league sources say these issues also affect Williamson. But Griffin reports progress on Williamson's ability to get low to the ground and move laterally.

These are the sorts of issues that the Pelicans would have always focused on with Williamson, Griffin says, but his monthslong rehabilitation from knee surgery has given the team and 2019 No. 1 pick time to focus on them and little else. Griffin is hopeful that the injury will, in time, be something that everyone looks back on as a "blessing in disguise."

Specialists at P3 and elsewhere note that it's easier to repair such issues in younger players than older ones. One veteran Western Conference scout says recent reports for prospects have often included the phrase "tight hips."

"At first, I would kind of laugh at it," the scout says. "But now I notice it more and more often, especially when they move laterally while defending. A lot of these guys can't get low to the ground."

Griffin says the team has a checklist of assessments -- the particulars of which he declined to share -- that Williamson must pass in order to play. But Griffin acknowledges that the key for Williamson's longevity will be all about "his brakes," his lower extremities, and that as the team works to maintain them, it's important for Williamson to become adjusted, acclimated and comfortable.

"They have a lot of work ahead of them," one Western Conference NBA athletic trainer says of the Pelicans. "It's not their fault, [but] I don't think it's going to be super easy."

IT'S 30 MINUTES to tipoff on Nov. 24, and the Pelicans are in town to face the Clippers for their 17th game of the 2019-20 season. And Zion Williamson has played exactly zero minutes in any of them. New Orleans is a disappointing 6-10.

Griffin, in a suit and tie and standing off to the side of the court during warm-ups, is talking about his prized rookie and the narratives that have hovered around him since the summer: Zion is in poor condition. He weighs too much. He's too explosive. That's why he's injured.

Griffin hasn't been shy about fighting back, calling such theories "asinine" in October when he cited Williamson's strong preseason, in which he averaged 23.3 points and 6.5 rebounds in four games. Here, Griffin calls Williamson a "freak of nature" and notes that when he went through his physical with the Pelicans, "he ran on the treadmill longer than the cardio-stress test people have ever needed to put anybody through a test to get his heart rate up."

Says Griffin: "Our challenge with Zion is: How do you continue to give him enough strength to control the torque he generates without adding weight that increases the torque in and of itself -- giving him the ability to be flexible enough and to have the right mechanics, and supporting that flexibility with the strength that it takes to control it in the form of a kid who adds muscle mass as fast as any human being I've ever seen." Which, to put it that way, does sound like quite a challenge -- or at least a mouthful.

Then Griffin shares another story about Williamson -- how the Pelicans engaged in a teamwide heavy weightlifting routine for just one week during the offseason. Williamson gained eight pounds of muscle during that span, a degree of weight gain that shocked staffers.

"He's not normal," Griffin says. "So finding stasis with Zion is the challenge, because he's 19 years old. He's still growing. It's not going to be about a number. It's going to be about metrics of flexibility and strength and control and all of the different things that we can measure that really are outside of weight."

One NBA athletic trainer who is familiar with Williamson agrees.

"If you're not moving well, I don't care if you're 300 pounds or if you're 175 pounds, there's going to be a problem," the trainer says. "It's got to be quality movement. The mechanics have to be done right."

Leading the Pelicans in their care of Williamson is Aaron Nelson, whom they hired in May as their vice president of player care and performance. Nelson spent the previous 26 years with the Phoenix Suns' vaunted training staff. With Nelson, the Suns were pioneers in movement efficiency, helping revive and maintain the careers of Grant Hill, Steve Nash, Amar'e Stoudemire and others.

"Aaron Nelson has been with all of the best that have ever done this," Griffin says. "He's added years to everybody else's career. They'll figure it out."

Griffin says later, "Aaron isn't learning anything he didn't know. Still, he's never seen anybody who can generate what [Williamson] can generate. ... He's a 280-pound triple-jumper. It's crazy."

And so the anticipation for Williamson's debut builds as it does whenever he explodes toward the basket, testing Newton's laws as he rises higher than physics suggests anyone of his size ever should. Cameras aim, crowds grow, hope swells -- but concern lingers.

So while the Pelicans preach patience and a fundamental approach, they know there is no fair template -- because there's never truly been anyone quite like Zion Williamson. 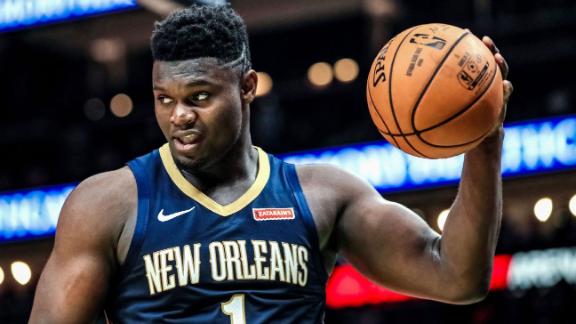 Zion ready to make long-awaited NBA debut
Malika Andrews breaks down what to expect for Zion Williamson in his return and what it means for the Pelicans. 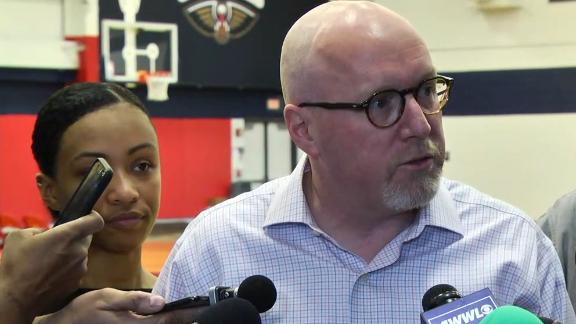