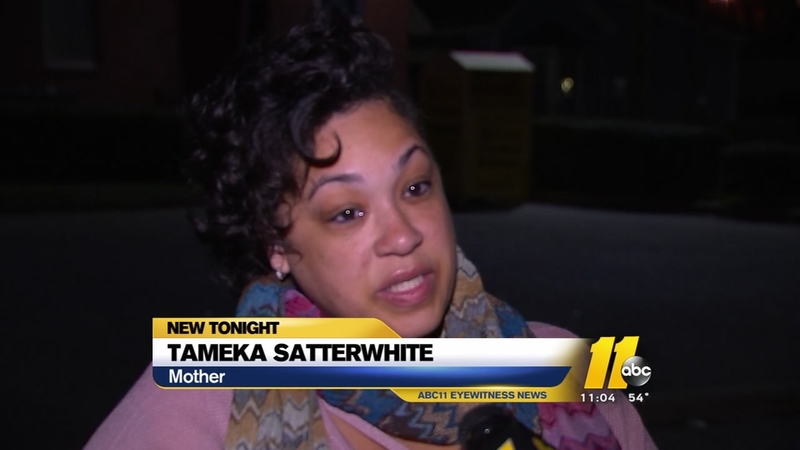 Update on an alleged assault at the State Fair

RALEIGH, North Carolina (WTVD) -- One month after the mother of a 16-year-old Raleigh high school student leveled a complaint against a Wake County sheriff's deputy for allegedly assaulting her son at the North Carolina State Fair, the investigation is complete but the conclusions are far from clear.

Joshua Satterwhite said he was tackled to the ground from behind, put in a chokehold and handcuffed for simply saying goodnight to the deputy.

But Sheriff Donnie Harrison's letter to Satterwhite's mother and his email to ABC 11 seem to say two different things.

"I was floored because this is all they did," said Joshua mother, Tameka Satterwhite.

The Wake County Sheriff’s office completed its investigation into alleged deputy assault of a teenager at NC State Fair. We’ve got the findings and reaction from the boy’s family at 11. #abc11 pic.twitter.com/uDCbWYE3fc

In the letter, Sheriff Harrison writes, "a number of supervisors have most carefully examined the circumstances ... appropriate action has been taken."

He goes on to say, "the exact nature of any disciplinary action against the deputy cannot be shared," citing state law. "Please be assured suitable measures were taken," the sheriff concludes.

The teenager's mother said she felt the sheriff's letter vindicated her son's story. But, she wanted to know how the deputy would be punished for his actions.

"The truth prevailed because they said disciplinary action was taken," Satterwhite said. "So, I feel the truth is out there but a letter to me isn't justice for my son."

Joshua was never charged with a crime. The Enloe High School sophomore, who is also a member of the school's football team, was released from custody with minor bruises, soon after telling deputies he was only 16.

But when ABC11 went to sheriff's office for comment on the investigation's conclusion, the sheriff's spokesperson offered a different response than what was given to the boy's mother.

The statement reads in party, "Under the totality of all the circumstances appearing to the deputy at the time, the deputy was justified in his initial contact with Mr. Satterwhite and use of physical force to detain and control him. Subsequently, after talking to Mr. Satterwhite and learning that he had never been in trouble and had a promising athletic career, the deputy exercised his discretion and elected to not charge the young man with a criminal offense."

"(This statement) is absolutely different. I'm shocked," said Satterwhite upon hearing the sheriff's statement to ABC 11. "There was no reason for (Josh) to be assaulted at all, so this is bogus."

Joshua's aunt, Juanita Hall, questioned why the sheriff's office references the prospect of criminal charges against the teen without detailing what criminal offense he committed.

"If they're saying he did something, what did he do? Because this was one of our questions: can you tell us what he did?" Hall said.

Community advocate Diana Powell, who has been advising the family since the incident, said her greater concern is the safety of the community in their encounters with law enforcement and other African-American youth like Josh who may be singled out.

"This young man was innocent, didn't do anything wrong and now they're putting it back on him like we're saving him," Powell exclaimed. "Saving him from what?"

The Satterwhites said Josh's seven friends who were there that night at the fair all gave individual statements at the sheriff's office as part of the probe.

They also say another eyewitness, a woman they did not know personally but who saw the report on ABC11, also came forward to corroborate Josh's version of events.

Satterwhite said she is seeking legal counsel to try to get the full details of the sheriff's investigation.

ABC11 has decided to slowly reduce the number of stories on the website that have a comments section. We believe very strongly that our audience should have an opportunity to discuss and debate events in our world, however, we have not been able to moderate the comments as well as we would like. Instead of hosting a platform that could allow a few loud and ugly voices to dominate a conversation, we want to encourage everyone to join us on our social media platforms and speak out there. Facebook: facebook.com/ABC11 Twitter: twitter.com/ABC11_WTVD
Report a correction or typo
Related topics:
raleighwake countyassaultnc state fairteenagerpolice brutalitywake county news
Copyright © 2022 WTVD-TV. All Rights Reserved.
RELATED
Enloe High student says deputy assaulted him at State Fair
TOP STORIES
NC Primary Election: What to know before you vote
Police looking for Johnston County man in Fayetteville double homicide
Inmate caught after escaping Orange County prison in Hillsborough
Highly anticipated public hearing on UFOs
President Biden to meet with families of Buffalo shooting victims
Shaw University rolls out plan to redevelop downtown Raleigh campus
Raleigh Fire, Police warn of looming problems without major pay raises
Show More
Baby giraffe fitted with orthotic at San Diego Zoo Safari Park
Baby formula maker Abbott says agreement reached to reopen plant
Musk: Doubt about spam accounts could scuttle Twitter deal
Cumberland County mom on mission to help other moms with infant needs
What we know about the victims of the Buffalo shooting
More TOP STORIES News