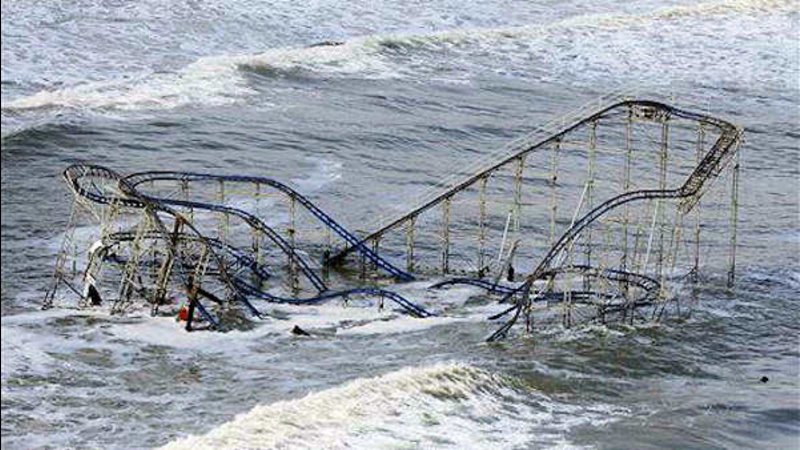 NEW YORK -- People have worked hard, and mostly successfully, over the past four years to restore the New York and New Jersey coastline to what it was before Superstorm Sandy crashed ashore.

The Staten Island neighborhood of Oakwood Beach, which was built on a salt marsh, is being returned to nature after officials concluded it would be foolish to rebuild a place with so little protection from the sea.

So far, 196 homes have been demolished under a state buyout program.

On Saturday, to mark the anniversary of Sandy, Mayor Bill de Blasio will tour the Staten Island Water Tunnel, then he and first lady Chirlane McCray will host a Halloween party at Gracie Mansion.

Con Edison said Saturday in a statement that the company is on schedule to complete $1 billion in upgrades to protect its systems from severe weather events. Hurricane Sandy caused more customer outages than any storm in Con Edison's history.

The company installed equipment that can withstand flooding, redesigned underground electrical networks and has taken other steps to avoid outages in major storms, saying those measure already have prevented electrical outages.

One key upgrade is the installation of "smart switches" designed to isolate trouble on lines, leading to fewer homes and businesses losing power, according to the company.
The community of Oakwood Beach on Staten Island is one of several places along the coast that have seen permanent changes wrought by the storm.

New Jersey Gov. Chris Christie said some of the state's hardest-hit areas are better off four years later and have improved energy reliability.

"Superstorm Sandy destroyed our homes, communities, and businesses, and left in its wake a deep sense of despair among all New Jerseyans. After Sandy, sorrow did not replace resilience and in typical New Jersey fashion we rolled up our sleeves, and responded with strength," it said. "We were able to rebuild, recover, and revitalize what had so quickly been taken away from us.

It wished "everyone a safe, quiet, and peaceful day. That's a great gift given what we know this day has wrought before."

Christie spoke Friday at a PSE&G substation in Hackensack, which was 2 feet underwater during the devastating storm that hit the East Coast.

The utility says it has since begun spending $1.2 billion on changes, including raising and relocating substations and modernizing cast iron gas mains in flood areas.

Christie's handling of the storm, which caused nearly $6 billion in damage and displaced thousands, got widespread praise and earned him a record-high approval rating.