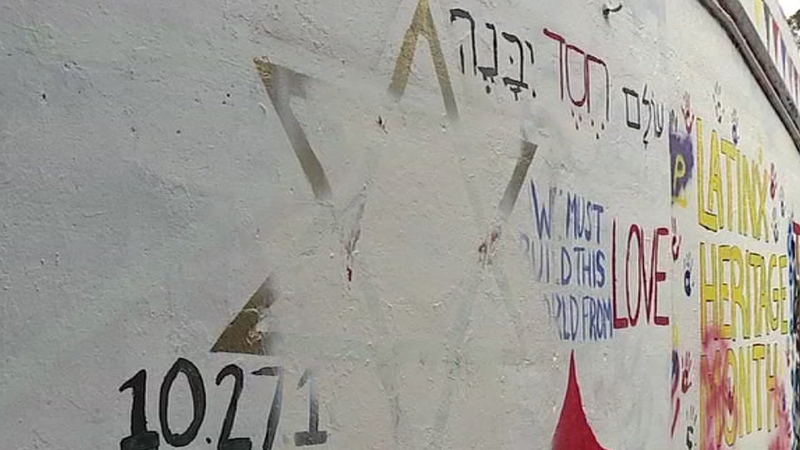 DURHAM, N.C. (WTVD) -- The Duke Jewish Student Union is planning a forum on November 26 after another anti-Semitic incident was reported on campus.

A red swastika was found painted over the Star of David at the "Free Expression" bridge on Duke University's East Campus. The Star of David was part of a mural in memory of the 11 people killed in the mass shooting at the Tree of Life synagogue in Pittsburgh.

"I was livid, not because we put work into it, because someone felt the need to come here and do that," said Keren Amkraut, a freshman at Duke University. "My grandparents are Holocaust survivors and to see that today at Duke University, it hurts."

It’s been painted over but a swastika was painted on the Star of David at East Campus Bridge on campus at @DukeU, defacing a tribute to the victims of the Tree of Life Synagogue massacre. #ABC11 pic.twitter.com/m2A37VQRH6

"Acts of hate aren't going to affect us in the ways that they want," said Rachel Radvany, a sophomore at Duke University. "We're not going anywhere."

Duke University painted over the swastika and administration said they won't stand for it.

"What we all woke up to this morning was a disgusting and cowardly act of vandalism that was designed to intimidate and that we believe and hope will have the opposite effect," said Duke Vice President Michael Schoenfeld, who is a member of the Duke Jewish community himself. He said actions like that one are happening with "depressing frequency in our country."

Newly released FBI data shows hate crimes in the US spiked about 17 percent in 2017, with a 37 percent increase in anti-Semitic attacks.

"To our Jewish students, faculty, staff and neighbors -- and indeed every member of our university community -- I pledge that Duke will do whatever we can to protect your safety," Price said in a statement.

But with at least two other anti-Semitic incidents reported at Duke this year, some students wonder if something should have been done before this recent incident.