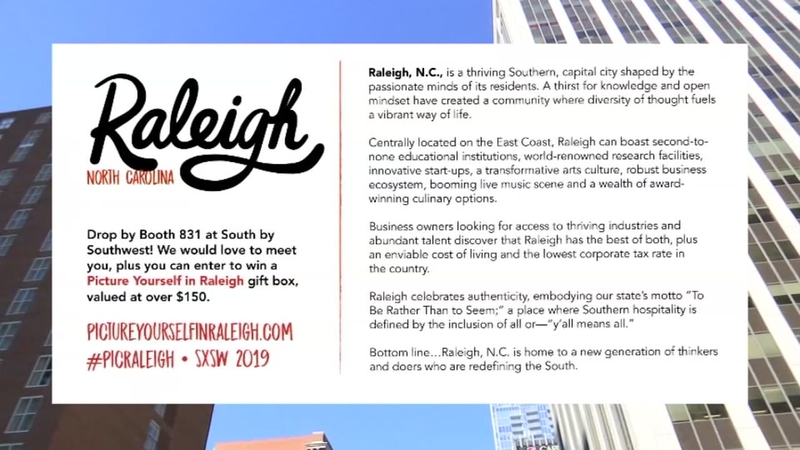 RALEIGH, N.C. (WTVD) -- Leaders from various tourism and economic development groups will be joined by local businesses at South by Southwest (SXSW) in Austin, Texas.

The annual tech and music conference draws nearly 300,000 people, providing an important opportunity to meet with businesses and top-end talent.

"There are a lot of entrepreneurs down there. You have a lot of tech start-ups, a lot of biotech. A lot of the companies and industries we're interested in pursuing," said Scott Peacock, the director of Public Relations and International Tourism with VisitRaleigh.

"We've had a lot of attention on our city the last year or so with some of the big projects like Apple and Amazon HQ2, and although we didn't land those, being a finalist starts to perk people's interest," Peacock said.

Coincidentally, Austin beat out Raleigh for Apple and the Army Futures Command Center. Despite coming up short in their pitches, the competition highlights the resemblances between the cities.

"I see the similarities between the demographic of people who live there, the kind of jobs of people are doing, the experiences that people that live there have," noted Chris Powers, the co-owner of Trophy Brewing Company.

Powers will join local officials during the trip, his second time attending the conference. He noted central Texas's growing local beer scene as a tool to use as Trophy Brewing Co. grows.

"I love going down there, checking out other people's tap-rooms, seeing the diversity of the draft lists and see how they're service styles work. We're getting ready to expand over on Morgan Street, so I like to travel to see what other people are doing in other markets that are successful," said Powers.