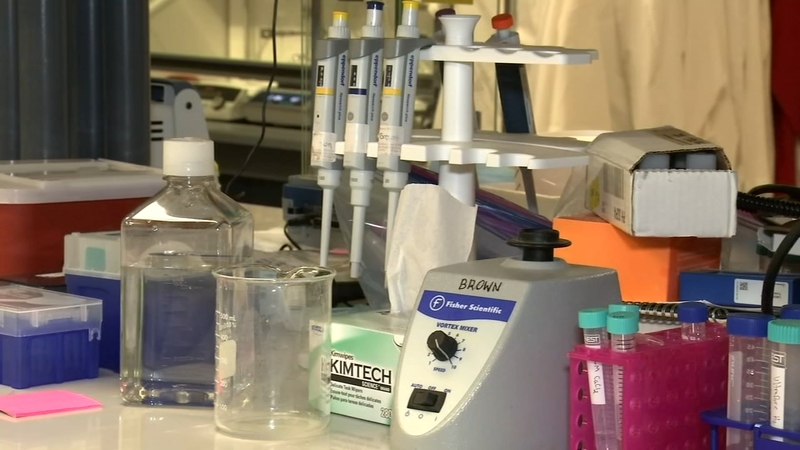 RALEIGH, N.C. (WTVD) -- Research work on a potential game-changer in the nation's blood supply shortage is underway in Raleigh. Scientists are working on an artificial blood component that they hope can be a synthetic substitute for human blood.

One of the lead scientists gave ABC11 an up-close look at the research that could have huge real-world impacts. For the first time, this month, the American Red Cross declared a "blood crisis" as supply runs out at hospitals and blood banks.

The science going on inside the labs at NC State's Biomedical Partnership Center in west Raleigh could be a cure for the nation's blood-supply crisis.

"This is where we perform reactions," said Dr. Ashley Brown, a professor at NC State and UNC as she gave a tour of the laboratory. Brown is part of a 20-person team of researchers developing a substitute for human blood. "It's something that we've been focused on for a number of years now."

Specifically, the team is developing artificial blood platelets. They're one of the four crucial components of human blood -- the tiniest of blood cells that control bleeding. Platelets travel to wounds; growing long tentacles; plugging our injuries until they heal.

"The ultimate goal would be to have something that completely replaces platelets," Brown said.

In the midst of a nationwide “blood crisis” w/ blood supplies dwindling at blood banks, we meet the Raleigh scientists working on an artificial blood component that could make blood shortages a thing of the past.
“It’s something we’ve been focused on for a number of years now.” pic.twitter.com/GGLAmajdKI

The synthetic blood platelets look like big sugar crystals. It's polynypan, a polymer the scientists inject with an antibody. They create a reaction that enables it to promote blood clotting and healing.

The team has seen success in clinical trials in mice and rats. It's now hoping for more encouraging results with the platelets in pigs. The ultimate goal is to use the synthetic platelets in humans for surviving surgeries, traumatic injuries or blood disorders.

On the walls outside the lab, there is a super-magnified photo of the team's artificial platelet. It's a picture of success.

"It looks pretty similar to an actual platelet," Brown said. "So in a situation like we're in right now, when we have a massive blood shortage, we could take some pressure off of current blood banks."

Since the pandemic began, there have been historically low numbers of people donating blood -- fueling the current crisis.