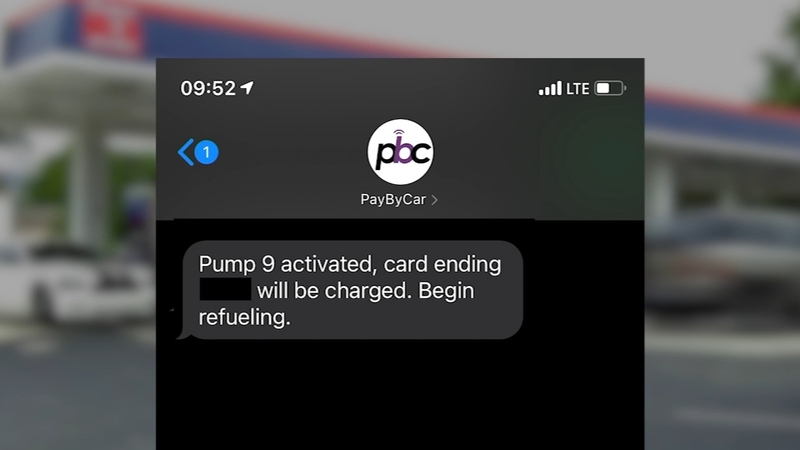 RALEIGH, N.C. (WTVD) -- If we didn't know before, we've learned during the pandemic that surfaces can carry germs, so less touching of public surfaces like keypads at the gas pump can be a good thing.

That may give a boost to a new technology being tested right now in the Triangle. This new technology allows you to pay for gas from inside your car with your smart phone, and the program could be expanded to all types of purchases.

Condon founded PayByCar when he realized that transponders, which are currently used to pay things like toll-road fees, could be used for other purchases like gas.

The idea sure got Wade Ferry's attention.

"I got involved with PayByCar, because I was standing at the pump with nothing to do, and I saw the advertisement for it, and I picked it up and started reading about and I thought it was a pretty cool technology," Ferry said.

Ferry, who lives in Sanford, already had an E-Z Pass transponder in his car because he commutes on the Triangle Expressway.

So he became one of a PayByCar's early users and now he buys gas at one of three Circle K stores in Raleigh, Sanford, and Morrisville that are part of the pilot program.

"Once you pull into the gas pumps it merely sends you a text message, and then you reply with your pump number and it activates the pump," he said.

Across America 65 million cars already have a transponder for things like a parking deck or a toll road.

If you don't have one, PayByCar will provide one.

Condon, also the company's CEO, believes eventually all of us will have a transponder or similar device in our cars that will allow in-car purchases at any business that has the capability of reading your transponder.

PayByCar decided to tackle gas purchases first because it's the most complicated with cars going in every direction and pulling up to random pumps that have to be read by the transponder.

"So we thought, 'OK well if we can take all the friction out of that, then yeah it'll work easily at a carwash or in a fast food drive-thru.'"

The whole process is so easy, Ferry no longer wants to buy gas the traditional way.

"I'll drive one mile out of my way, just to go to the Circle K and pump gas there because of the ease of the transaction."

A transaction many of us may soon be doing from the comfort and convenience of our cars.
Report a correction or typo
Related topics:
technologyraleighsanfordmorrisvillebusinessautomotivetechnologygas station
Copyright © 2021 WTVD-TV. All Rights Reserved.
More Videos
From CNN Newsource affiliates
TOP STORIES