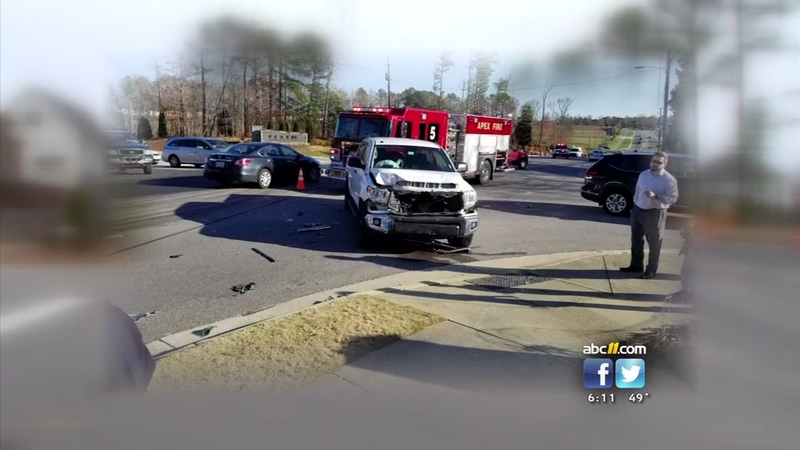 APEX, NC (WTVD) -- Neighbors in an Apex neighborhood say a traffic light is needed to cut down on collisions at a dangerous intersection - Beaver Creek Commons Drive at Kelly Road.

"This intersection is very dangerous. It just continues to get worse," said Betsy, a resident of the Abbington subdivision.

"I'm home during the day and the first thing I hear is the crash. You can literally hear the house shake," she said.

Neighbors in #Apex say a traffic light is long overdue at the intersection of Kelly Road and Beaver Creek Commons Drive. Since 2017, @ApexPolice say there have been 8 wrecks. A neighbor snapped pics of this crash yesterday. Traffic light 🚦 will arrive in May #ABC11 pic.twitter.com/aRtN20KmbY

A couple weeks ago, Betsy said, a motorcyclist was hit.

"It's very scary. It could be my husband or my children. Neighbors or neighbors' children. Something's got to be done," she said.

Fixing this problem has its own challenge: growth.

And that's why last year, the North Carolina Department of Transportation approved a plan to allow residential developer Beazer Homes to install a traffic light at the intersection.

Beazer hasn't started work on the estimated $150,000 project because it's working through relocating utilities in the area and other challenges.

Apex Police said there have been eight accidents at the intersection since 2017.

City leaders blame distracted driving, and improper left turns onto Kelly Road during rush hour as some of the causes of the crashes.

Apex town leaders said they are working with Beazer to ease residents' concerns.

"The town of Apex has in fact accelerated that project and we expect that by the end of May to see that signal go up," Mayor Lance Olive said.