Transgender inmate granted transfer, but not to women's facility 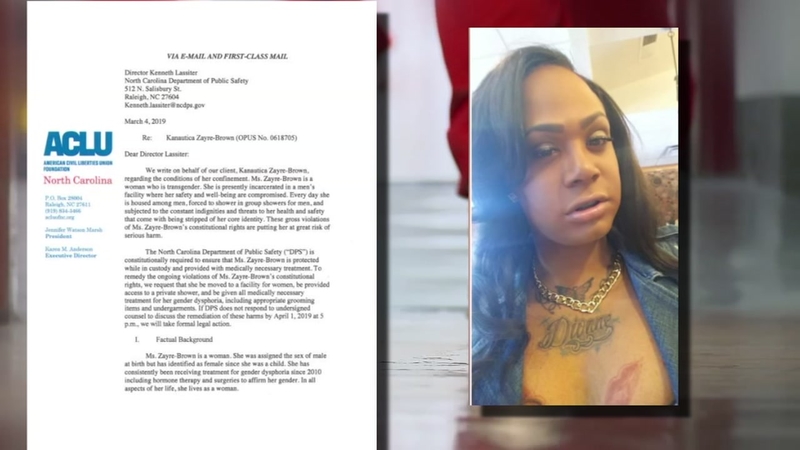 Transgender inmate moved, but not to women's prison

Just hours before a looming deadline, ABC11 learned a North Carolina transgender inmate was transferred to Warren Correctional Institution in Manson on March 28 from another facility as opposed to a women's institution.

A group of supporters and advocates for 37-year-old Kanautica Zayre-Brown, a transgender inmate, hope the North Carolina Department of Public Safety complies with a Monday 5 p.m. deadline to have Zayre-Brown transferred to an all-female facility. The deadline was set forth by the ACLU of North Carolina. The organization sent a letter to DPS on March 4 demanding Zayre-Brown be moved to a women's prison because they claim that conditions at a men's facility where Zayre-Brown is housed are "putting her at great risk of serious harm."

Zayre-Brown is currently housed in a single cell as opposed to an open dorm. Officials said they believe the placement is "most appropriate" for the time being.

Supporters for transgender woman Zanautica Zayre-Brown meeting now at the state capitol demanding she be transferred to a women’s facility by 5pm today. Or else face a lawsuit by the ACLU of North Carolina. #ABC11 pic.twitter.com/Sn2AWpexxf

Monday morning, about 20 advocates gathered in front of the State Capitol to voice their concern with Gov. Roy Cooper and DPS for Zayre-Brown's current conditions.

"You said you took Kanautica's plight seriously," said organizer and scholar Tommi D. Hayes referring to Gov. Cooper. "But she suffered for over two weeks under conditions that Amnesty International defines as torture."

"I don't understand why Gov. Roy Cooper hasn't already had Kanautica transferred," added Serena Sebring, regional lead organizer for Southerners On New Ground. "The failure to correct this is the biggest mistake they're making right now."

Shortly after the small crowd began to leave, Jeremy Collins, Cooper's director of public engagement, came out of the Capitol to address several questions. Collins repeatedly shifted ownership of Kanautica's transfer to DPS.

"The governor's done what he can," Collins told one advocate. When pressed for more specifics, Collins again deferred to DPS: "The governor is allowing the department of public safety to do what they need to do."

Less than 30 minutes prior, a representative from the ACLU of North Carolina stood firm in the organization's effort to fight for Zayre-Brown in the event the inmate is not transferred to a women's facility.

"We'll be looking at all courses of action and we'll do what's best for Kanautica," said Molly Rivera. "If they do respond, we'll be reviewing their response carefully."

Monday afternoon, the Department of Public Safety responded to ABC11's request for comment by email, stating, "Prisons has been and will continue diligently conducting research on legal precedent and best practices across the country with an eventual goal of moving Zayre-Brown to a female facility."

When asked about Cooper's involvement and if there were further actions he could take, DPS deferred to the above statement.

Zayre-Brown, born Kevin Chestnut, has a lengthy criminal history and is considered a habitual felon by DPS. Zayre'Brown's criminal charges date back to 1997 and include scores of non-violent felonies, mostly for financial and insurance fraud, worthless checks and obtaining property by false pretenses.