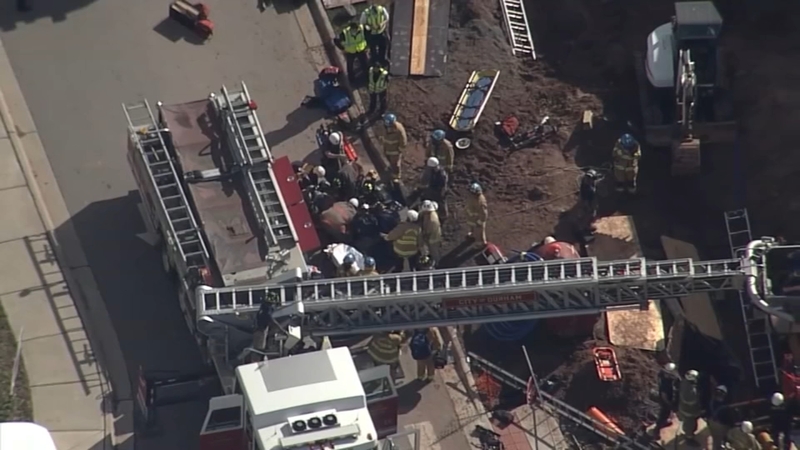 DURHAM, N.C. (WTVD) -- With rescue and recovery efforts complete in a deadly trench collapse at a construction site in Brier Creek, the focus turns to investigation of the accident that cost one worker his life.

D R Mozeley, the company in charge of the construction project said the accident involved a subcontractor and issued a statement Tuesday morning.

"On January 15, an incident occurred involving a subcontractor working on a construction site for a D R Mozeley project," the Charlotte-based company said. "Our thoughts and prayers are with the workers and their families affected by this incident. The safety of all employees and subcontractors on our construction sites is our highest priority and we are deeply committed to following all industry safety standards. We will be working with the appropriate agencies to identify the cause of this incident. We will provide more information as it becomes available."

On Wednesday, a trench collapsed around 11 a.m. at 4209 Corners Parkway near TW Alexander and Glenwood Avenue, leaving one worker covered in dirt. His body was recovered hours later. Two other workers were hospitalized and another scrambled to safety under his own power.

On Wednesday,. "representatives of J Squared Plumbing were scheduled to work on a water meter assembly in a three foot well, not performing work in a deeper trench. D R Mozeley continues to work with state and local agencies regarding this incident, and our thoughts and prayers remain with the workers and their families affected by this incident," the company said in a statement to the ABC11 I-Team.

Occupational Safety and Health officials with the North Carolina Department of Labor are investigating to determine the circumstances and factors in the accident.

Some of the things investigators look for as standard practice include, but are not limited to:

D R Mozeley has been in business since 1958 and is licensed to operate in eight Southeastern states.

The company has had three incidents referred to OSH since 2015, resulting in two citations.

In November, it faced an excavation work complaint in Union County, but the case was closed and the company was not fined. In October 2018, the company was fined $2,600 for a violation stemming from problems with aerial lifts and fall protection.

OSH investigations can take from a few weeks to six months depending on the complexity of the incident.