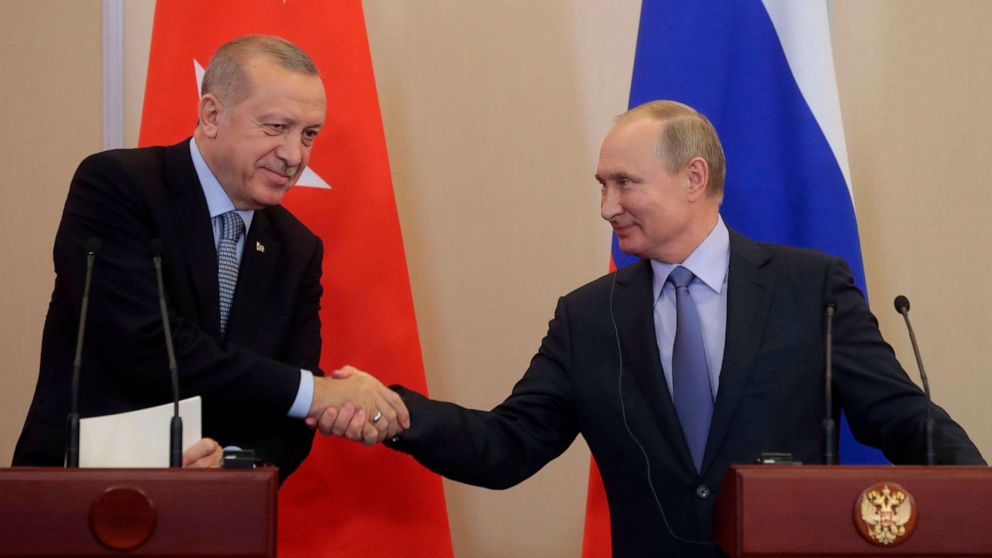 Russia and Turkey have reached an agreement to share control of Syria's northern bordersuperseding a deal, between President Recep Tayyip Erdogan and U.S. Vice President Mike Pence that was reached last Thursday.

The deal came just before the U.S.-Turkish halt in hostilities reached its deadline, with a senior Trump administration official touting it as "one of the best ceasefires I've ever seen."

But as the remaining 1,000 U.S. troops withdraw from northeast Syria at President Donald Trump's command, critics have blasted his administration as ceding this territory to Turkey, Russia and Syrian President Bashar al-Assad, who has overseen a brutal war against his own people, and giving up leverage to accomplish U.S. goals in the region, including ensuring the defeat of the Islamic State and expelling Iranian forces from Syria that threaten U.S. allies, especially Israel.

After the announcement, the U.S. special envoy for Syria told the Senate Tuesday that Putin took "a page from what we have done" and came up with a "similar ceasefire in many regards for the rest of northeast Syria, except the Turks got even less" -- meaning Russia got more out of its negotiations with Turkey than the U.S. team.

The deal between Erdogan and Russian President Vladimir Putin calls for Syrian Kurdish forces and their weapons to be removed from a buffer zone the length of the border in northeastern Syria -- an expansive area where these forces live now that extends 30 kilometers (18.6 miles) in from the border. Turkey would maintain control of the portion it now has, thanks to its agreement with the U.S., while Assad's forces, backed by Russia, would secure the rest of it.

It was unclear Tuesday whether the Syrian Kurdish forces, known as the YPG, would agree to that or whether they were consulted on the deal. The YPG constituted the bulk of the Syrian Democratic Forces, or SDF, the fighting force that effectively served as U.S. ground troops in the fight against ISIS.

If the YPG exit this area in the next 150 hours, or just over six days, then Russian and Turkish military units will conduct joint patrols at the 10 km line to ensure the deal meets what Turkey says are its security concerns about Kurdish terrorists in the area. Turkey considers the once U.S.-backed YPG to be a terrorist organization, indistinguishable from Kurdish separatists across the border in Turkey that Ankara and Washington both consider terrorists.

In testimony before the Senate Foreign Relations Committee, Ambassador James Jeffrey, the U.S. special envoy for Syria and for defeating ISIS, cast some doubt on the Russia-Turkish deal, saying it's "not particularly believable" that Russia can get the YPG out of the area.

"Turkey has not really gained all that much from this, as I said, but in the process has scrambled the entire northeast, undercut our efforts against ISIS, and brought in the Russians and Syrian regime forces in a way that's really tragic for everyone involved," he said, adding at another point that ISIS is now "emboldened" by the situation.

But he again denied blame for the Trump administration. While he said it was not "inevitable" that Turkey conducted this operation, he said Erdogan and his government chose to act "unwisely and dangerously ... despite warning after warning and incentive after incentive" from the U.S. not to do this, including from Trump himself.

Before the deal was announced, the U.S. had warned Turkey and Russia against "any agreement ... that would undermine the security and stability and the current calm that we now have in the far northeast of Syria," according to the senior administration official.

But they also said the U.S. opposed "any Turkish kinetic military operation that moves forward" from the territory Turkey currently controls under the U.S.-Turkish deal announced last week.

That agreement called for a 120-hour, or five-day, "pause" in Turkey's offensive into northeastern Syria against the YPG. During that time, the U.S. facilitated the exit of YPG fighters and the dismantlement of their heavy weapons -- something that the SDF commander, Gen. Mazloum Abdi, told Pence they had completed in a letter delivered on Tuesday. The senior administration official told reporters that the U.S. was "fairly confident" that was the case, but was working with Turkey now to address their questions on it.

"If the Turks can find any (Kurdish fighters) inside the safe zone ... the Turks will either let us know or they'll shoot them if they find them because the Turkish ceasefire does not involve people who are behind their lines," the official added, "but we don't think that's going to happen. We think that Turkey in the end will agree that the withdrawal is taking place."

An SDF spokesperson told ABC News they had withdrawn from the buffer zone, but declined to say more. There was no comment yet from the Turkish side.