'Devastated': More than 100 rally in Raleigh in support of Ukraine 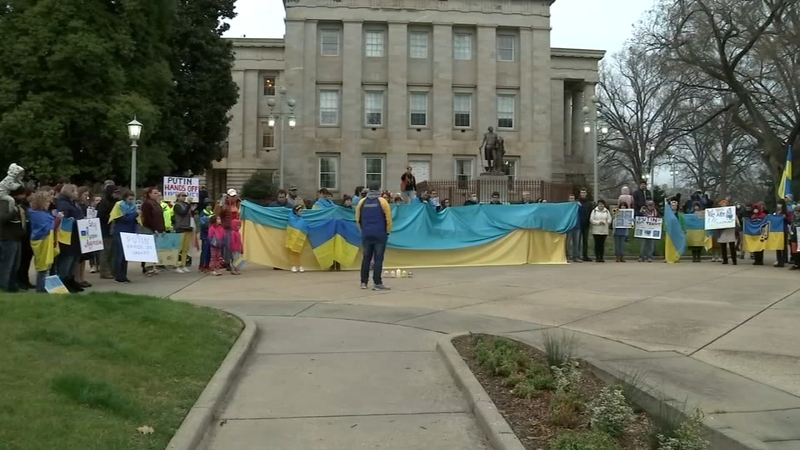 'Devastated': More than 100 rally in Raleigh in support of Ukraine

RALEIGH, N.C. (WTVD) -- A crowd of more than 100 people gathered outside the State Capitol in Raleigh on Thursday night to stand with Ukraine.

Many of the demonstrators were Ukrainian citizens and immigrants who have spent the past 24 hours trying not to panic. But as missiles and gunfire attack their homeland, they admit not worrying is getting harder and harder to do.

On the south front of the Capitol, they sang traditional Ukrainian folk songs and stretched the blue and gold of their homeland's flag across the lawn. Many of the faces in this crowd were born and raised in Ukraine, now live in the Triangle and are in disbelief over the carnage and chaos back home.

"I'm sure nobody here has slept for the last 24 hours because everybody has been trying to get in touch with their family and make sure they're OK," said Olena Koslova-Pates, one of the rally organizers. The Ukrainian-born Wake Forest mom gave ABC11 constant updates as Russia moved closer to an invasion. On Thursday night, the grim reality that this is war.

"Until the very last moment, we were hoping and praying that this would not happen. But it has," Kozlova-Pates said. "So it's very important as a community of Ukrainians in the Carolinas to let the world know we support Ukraine."

Ukrainians in the Triangle gathered outside the State Capitol, Thursday night, to #StandWithUkraine
As the sun set in downtown Raleigh, they chanted, “support Ukrainian Army” and “Putin must pay” #abc11 pic.twitter.com/3pL4mJ1v8E

Polina Lymar, who immigrated to Raleigh from Ukraine in 2012, stood worried sick about family back home in a small town not far from Kyiv. She said there is a military airport there that was attacked by Russian missiles Thursday morning. Her family is shaken, but OK, she said.

"They're devastated. They're in shock. They're afraid," Lymar said.

There were also Russians in this crowd, including Kristina Markina, who apologized for her native nation's leaders. "I'm sorry," she said.

On the streets of Moscow on Thursday, Russians who dared to demonstrate against President Vladimir Putin's military invasion were quickly snatched up and arrested by police; the price for speaking against Putin.

Back in Raleigh, Markina was free to speak her mind and regretful that like-minded Russians couldn't push Putin out before he sent the tanks into Ukraine.

"It is like attacking your own family. I cannot understand how that could happen; how some Russian citizens, because of propaganda, may think this is the right thing to do," Markina said. "We do not want war. But we are very sorry that we made this happen."

"The reaction is one of shock and pain about what the consequences are and will be. It's going to be very painful consequences not only for Ukraine but for even people in the United States," said Oleh Wolowyna, the Vice President of the Ukrainian Association of North Carolina.

Wolowyna, a Ukrainian native and researcher, has been in touch with loved ones in the country.

"I've been talking to them every day and the last call was last night, and they are prepared to fight for the war," said Wolowyna.

A group of people took part in a rally in downtown Raleigh late Thursday afternoon to express support of Ukraine following Russia's invasion.

Dozens of people have already been killed on both sides, as Ukrainians brace for the possibility of a drawn-out conflict.

"How would you feel if your family (was) being attacked, totally without any provocation," asked Wolowyna.

He urged the US to provide military and economic support to Ukraine, speaking with ABC11 shortly before President Joe Biden's remarks from the White House, where new sanctions against Russia were announced.

President Joe Biden on Thursday announced a new round of sanctions targeting Russia after its invasion of Ukraine.

"We never expected it's going to be the full-scale attack on the whole entire country of Ukraine. I'm just speechless," added Arthur Schwarts, a Triangle business owner who lived in both Russia and Ukraine.

Schwarts still has family in both countries.

"The people there don't want it. They disagree with all the stuff that's going on. They pray for everything will stop right now and continue with the talks," Schwarts said.