'Not going to happen again': UNC looks to rebound from nightmare season 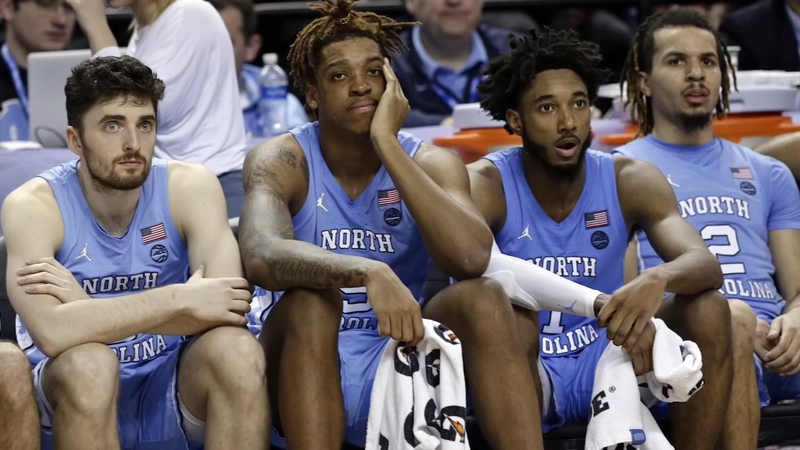 CHAPEL HILL, N.C. (WTVD) -- "Year of 1,000 Daggers" sounds like an amazing martial arts flick. It could also be the title of 2019 North Carolina basketball's season in review recap. The daggers, unfortunately for the Tar Heels, were all pointed at them.

"He's pissed, for sure." said Tar Heel senior Andrew Platek of head coach Roy Williams, "I think whenever he chews us out in practice for making a mistake, he always mentions 14-19 and how it's not going to happen again."

There's still a palpable disbelief around the Heels hoops program that things went so far off the rails last year at 14-19, even more so, there's a determination to never let it happen again.

"Throughout losing all those games, I think the one thing that stuck out to me the most is when things aren't going right, you come in and try to work even harder than you did the day before so you can try to really change those things," senior star Garrison Brooks said. "I think that's something I had to learn myself to come in and try to work hard every day and fix what's going on."

There was some bad luck surely and great shot making by opponents but more just bad play, errors that Williams is aggressively attempting to stamp out in the first practices of this year.

Don’t imagine it’s a coincidence that Roy Williams is wearing his “I voted” sticker during Media Day pic.twitter.com/UfOys3i5yR

"I do remind them because you just think six games we lost where the other team had the last shot and they made all six, three games we lost where we didn't get a box out, and nobody in the history of college basketball has emphasized boxing out more than I do," Williams said Wednesday. "So when we have two possessions in a row at practice last Friday we don't box out, you're darn right, I went absolutely stone-cold crazy, and they better expect that until they change their behavior."

That wayward season ended with an 81-53 drubbing by Syracuse in the ACC Tournament.

With a slew of new freshmen faces, there is of course also a sense of turning the page. While they're just six practices into the preseason, both Day'ron Sharpe and RJ Davis among others have earned positive reviews from teammates and coaches, though Williams did note that the pandemic prevented his players from participating in the legendary alumni pickup games during the summer. He usually gets a scouting report from the pros about his new players after they've been through that crucible.

UNC vs All Y’all pic.twitter.com/3tsCbH2STW

What the season will look like specifically is still anyone's guess. Williams, for one, is happily embracing the protocols necessary to play.

"I'm going to wear a mask during a game. And so, to me it's the adjustments that we have to make by being more intelligent that we can have a safer world," Williams said. "I loved the old normal. I'm going to figure out a way to love this normal as well."

Leaky Black, who's battled injuries for almost the entirety of his Carolina career, is hoping for a redemptive season both personally and as a team.

"We all still feel everything we felt from last year. Every loss, buzzer beater, whatever the case may be, we still feel it to this day," Black said. "I feel like we're just going to take that fire into every game and make sure we don't have a season like we did."
Report a correction or typo
Related topics:
sportschapel hillunc tar heels
Copyright © 2022 WTVD-TV. All Rights Reserved.
TOP STORIES
Raleigh City Council votes to ban exotic animals
Parade shooting suspect wore women's clothes to blend in: Police
Man struck by lightning near island off North Carolina
Is your home prepared for hurricane season?
Spotted lanternfly sighting confirmed in North Carolina
Wake County continues to scale down COVID-19 testing sites
Fireworks dazzle over Dix Park, downtown Raleigh for Fourth of July
Show More
Highland Park 4th of July parade shooting survivors speak out
Renters struggle to find apartments in hot housing market
Brittney Griner writes letter to Pres. Biden pleading for his help
2 police officers shot during July 4th festivities in Philadelphia
Highland Park parade shooting victims range in age from 8 to 85
More TOP STORIES News