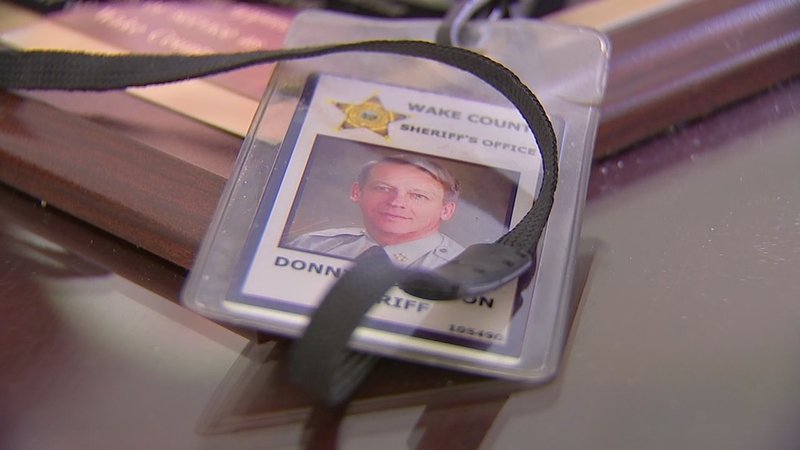 RALEIGH, N.C. (WTVD) -- For years, the large wall behind Wake County Sheriff Donnie Harrison's desk was completely covered by photographs, plaques and other mementos of his 50-plus year law-enforcement career.

But today, the wall and his office are empty.

And the 72-year-old Harrison is melancholy.

"When I wake up Monday morning and that car's not in my yard, that's when it's going to hit me. And I'm not looking forward to that," Harrison told ABC11 on his last day in his downtown Raleigh office.

Although he is officially the sheriff until Gerald Baker is sworn in Monday morning, Harrison is trying to wind down.

But it's hard for him.

Becoming a sworn law enforcement officer was a nearly life-long dream for Harrison.

"As a little boy, I said I was going to be a state trooper and God blessed me. And this is the icing on the cake," Harrison said.

When first elected in 2002, Harrison became the only certified law enforcement officer to serve as Wake County Sheriff.

And in the 16 years since, it wasn't uncommon for him to show up at crime scenes or even handle the occasional call himself.

Thursday evening, as Harrison was returning from a meeting, he heard a domestic-violence call come across his radio.

"I was about five miles from it and, of course, you know me, I'm going to answer it and I was the first car there."

Harrison, a Republican, was always dependent upon many in Wake County's Democratic Party majority to vote for him.

But earlier this month the blue tide that swamped Wake County apparently washed him out of office.

He said he believes his significant loss was more a result of an anti-Trump sentiment than a reflection of the job he's done.

From the beginning, he said his goal was to provide professional law enforcement to the people of Wake County.

And when he first took office, he refused to fire people who had been loyal to John Baker, Jr. the longtime sheriff he defeated.

Harrison said he believes the new sheriff will give staffers the benefit of the doubt.

He will be watching while enjoying his hobbies of raising horses and bloodhounds.

And he said he will also be enjoying the most important thing in life -- family.

"As my granddaughter told me and my grandson, 'We'll have more paw-paw time.'"

Probably one of the biggest criticisms of Harrison through the years was his participation in the federal government's 287-g program in which his deputies help immigration authorities identify people in the country illegally.

It's a program his successor has vowed to end in Wake County.

But Harrison has no regrets.

And he won't rule out running for office again.