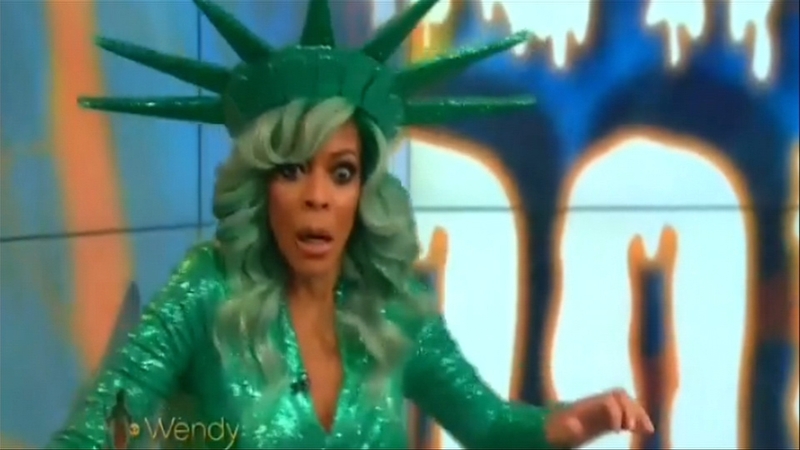 The FDNY was called to Chelsea Television Studios on West 26th Street in Chelsea at 10:51 a.m. after the 53-year-old talk show host -- dressed as the Statue of Liberty -- began to slur her words.

"Let's get started. Our first guest..." Williams started to say before she backed up and fainted. A crew member was seen running onstage to help her.

Here's the video of the incident:

She was standing and appeared composed after a commercial break.

Wendy Williams came back after commercial break. Said she overheated in her costume. pic.twitter.com/jccZaQ9oK2

"That was not a stunt. I overheated in my costume I did pass out. But you know what, I'm a champ and I'm back."

A more detailed statement from Ronn Torossian, spokesperson for Wendy Williams, was issued via email:

"Ms. Williams fainted on-air this morning. She is dehydrated and is on her way home for a good day and nite of sleep. She has been examined by medical professionals and is well. She is ok and will continue as shows as planned. She will address this on-air tomorrow. She has never missed a day of work and is looking forward on November 13th to her 1500th show."

The FDNY said they are still at the scene but no one has been taken to the hospital.

Eyewitness News has reached out to a rep for The Wendy Williams Show for an update on her condition.
Report a correction or typo
Related topics:
arts & entertainmentnew yorktelevisionwendy williams
Copyright © 2022 WABC-TV. All Rights Reserved.
TOP STORIES
Shelf cloud seen in Raleigh ahead of line of storms
More than 75,000 pounds of baby formula lands in US amid shortage
Clayton police arrest man in shooting that injured 1
Biden: US would intervene with military to defend Taiwan
Wake County begins giving COVID booster shots for children ages 5-11
Biden: Monkeypox threat doesn't rise to level of COVID-19
Pfizer: COVID vaccine for kids 6 months to 5 years old 80% effective
Show More
Texas woman sought in fatal shooting of pro cyclist: US Marshals
Zibanejad leads Rangers to 3-1 win over Hurricanes in Game 3
Russian sentenced to life in Ukraine's 1st war crimes trial
1 person in hospital after a pedestrian was hit crossing I-95
Event for Ukraine raises money for paramedics on frontlines
More TOP STORIES News