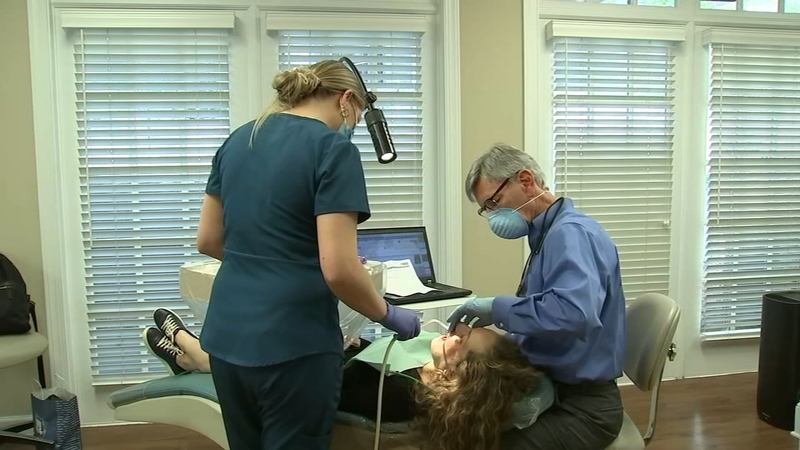 RALEIGH, N.C. (WTVD) -- The so-called Zoom effect has been much talked about during the pandemic.

It forces many of us to see our faces up close more than we're used to.

That has led many to want to make improvements.

"One of the most important impactful things they can do for their appearance, non-invasive is straightening and whitening their teeth," Dr. Jim Buckthal a Raleigh orthodontist told ABC11.

He said his practice has recently seen a jump in business.

A big part of it is adult patients.

"People are on their computers, they're working from home, seeing each other close up face to face," Buckthal said, "They're noticing other people's teeth and then they're examining their own faces, and realizing, wow I need to make some changes."

"I'm one of those people who's like, I need to close the self-view because it's just too distracting to look at it," she said.

The Raleigh lawyer, however, isn't getting her teeth straightened again during the pandemic for the same reason so many other adults are.

Instead, she's just trying to correct a persistent overbite.

But like many of the adults coming to Buckthal, she has opted for clear braces, not metal ones.

"As a professional and having to talk to people and meet with people, it's like, 'Are you 15 or are you going to be my lawyer?'", she laughed.

She elaborated about her Invisalign braces saying, "Of course it does make a difference. I mean you can kind of tell, but it doesn't have that glaring obviousness."

For those who had to get braces early in the pandemic, the glaring obviousness didn't matter as much because they knew it might be months before they were around people again.

Buckthal said they told him it was because their masks covered up the braces.

He said he believes another reason for the increase in adult business is that some of those lucky enough to keep their jobs through the pandemic actually managed to save money in their social budget on things such as gas, eating out, and entertainment by being isolated.

"And so they have discretionary income that they're using to help themselves," Buckthal said.

Ultimately, his adult patients are looking out for their overall health both physically and mentally he said,