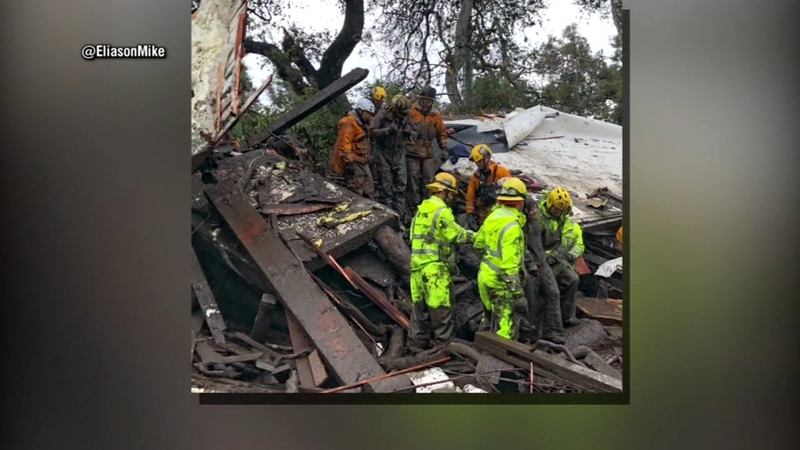 At least 15 dead in California mudslides

MONTECITO, California -- The death toll in weather-related incidents in Santa Barbara County has risen to 15 early Wednesday, after a storm led to dangerous mudflows in the Thomas Fire burn area.

The fatality figure could increase as at least two dozen people were considered still missing as search-and-rescue efforts continued.

"While we hope it will not, we expect that this number will increase as we continue to look for people who are still missing and unaccounted for," Santa Barbara County Sheriff Bill Brown said.

Details of the circumstances were not immediately disclosed. In addition to the fatalities, 25 people were reported to be injured.

The mangled wreckage of a car that was swept away by floodwaters in Montecito, California.

Overnight, crews were scrambling to get to some of the worst areas, looking for residents who may be trapped inside their homes. Workers were also attempting to clear as many roads as possible from the slippery muck to make it easier for rescue crews to move around.

It was expected to be another long day for rescuers and residents as they try to get through recovery efforts.

Powerful mudslides destroyed homes in the area on Tuesday as rescue crews rushed to search the rubble and mud, which was reported to be 5 feet deep in places.

Firefighters slogged through waist-high mud to pull a muck-covered 14-year-old girl out of the ruins of a home in Montecito, where she had been trapped for hours. She was taken away on a stretcher.

Santa Barbara County firefighters had dogs picking through the muddy remains of homes, looking for any others who may have been trapped. Fire officials said there was 50 air-hoist rescues, and dozens upon dozens of ground rescues.

Forecasters said the maximum rainfall occurred in a 15-minute span starting at 3:30 a.m. near the Montecito, Summerland and Carpinteria areas of Santa Barbara County. Montecito got more than a half-inch in five minutes, while Carpinteria received 0.86 inches in 15 minutes.

Mud and debris littered roadways and blocked the main line of the Union Pacific Railroad through Montecito.

The California Highway Patrol shut down the northbound 101 at Route 126 in Ventura, and at Seacliff, and the southbound 101 was closed just south of Santa Barbara at Milpas.

The closure was due to flooding, debris flows and an explosion apparently caused by a ruptured gas line, according to authorities. It remained in place Wednesday morning.

Motorists were urged to avoid the area and use the 5 Freeway as an alternative route.

Elsewhere in the Thomas Fire's massive burn area, Route 33 was shut down north of Ojai -- between Fairview and Lockwood roads, the highway patrol said.

Caltrans also announced the closure of Route 150 near Lake Casitas.

US 101, SR 33 and SR 150 all CLOSED due to flooding, mud, debris flow and downed wires - AVOID AREA. I-5 over “The Grapevine” is the alternate route for the Central Coast this morning. @CaltransDist7 @CHP_Ventura @CHP_SantaBarb @VCFD @VCPublicWorks @VENTURASHERIFF @CHPsouthern https://t.co/Md2gTUENk0

There were no estimates of when the highways would be reopened.