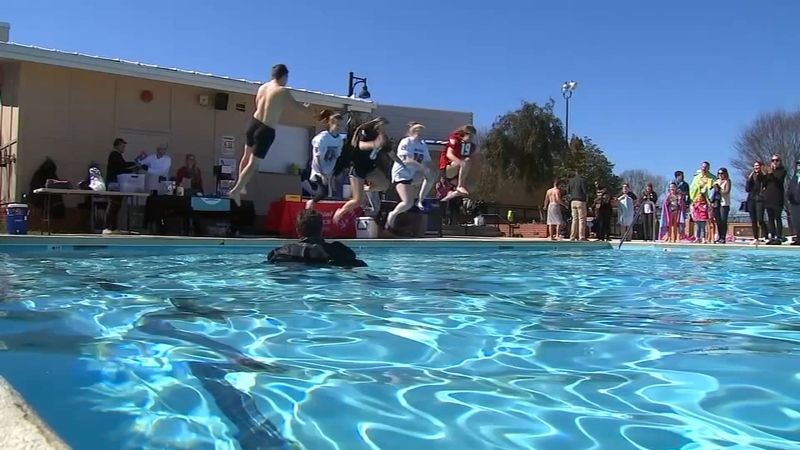 RALEIGH, N.C. (WTVD) -- The 2020 Polar Plunge in Raleigh happened at the University Club's outdoor pool on a Saturday when snow was still visible on nearby shrubbery.

Teams of hardy swimmers and some individuals of all ages, laughing as they leaped into the water where temperature under the surface was in the 40s.

Lt. Bill Davis of the North Carolina State University Police, an organizer of the Polar Plunge, has participated in Special Olympics fundraisers for 16 years and recalls much colder conditions.

"We used to do it at Lake Raleigh," he said. "And we had to go out there one year and chip away the ice so people could get into the water!"

But this year's Polar Plunge was not nearly as cold as years prior.

"It's not, it's definitely not," Knightdale Police Lt. Ginger Keel said. " I think for me, I'd rather plunge into the water all in one shot and get it done, then feel it coming up my legs! I did the polar plunge as an individual about ten years ago. We've been heavily involved in it in the Knightdale Police department about 10 years now."

Wake County officers weren't the only local law enforcers who participated in the plunge. Some crossed the county line to help raise money for Special Olympics.

Officer Michael Wichowski from North Carolina Central University said, "I've been helping out t for the past few years and this is the first time I've taken a polar plunge. So I've been trying to get a lot of support."

He and his K-9 officer partner Sheba, a yellow Labrador, watched from poolside after the cold weather caused a change in a planned activity scheduled to precede the plunge.

"We had a fun run to do, and it was just too hazardous for the runners," said Davis, referring to icy, muddy trails not far from the pool. "We decided to cancel that, so this will not be too bad! And when they get out, they have the great sun to dry them off."