WTVD
By Jonah Kaplan
CHARLOTTE, N.C. (WTVD) -- On Friday morning, officials with the U.S. Immigration and Customs Enforcement (ICE) announced that roughly 200 people were arrested in raids across North Carolina over the last few days.

However, officials said that number does not include the nearly 30 people taken into custody at a Sanford manufacturing company on Tuesday morning because the arrests were made by a different division.

Although the statistics are not finalized, officials said the following is true of the nearly 200 arrests:

Sixty other people arrested were not specifically targeted. Instead, they were arrested when they could not verify their legal status for ICE agents who were searching for other undocumented people.

As for the seeming increase in raids, ICE Atlanta field office Director Sean Gallagher said this is the new normal. He said with Wake, Durham, and Orange county leadership ending the 287g program (which transferred undocumented detainees to ICE custody) ICE has to now actively seek out undocumented immigrants.

In response, Orange County Sheriff Charles Blackwood said his county has "never been a participant in the 287g Program,"

(READ THE RESPONSES FROM WAKE, DURHAM AND ORANGE COUNTIES BELOW)

Gallagher said it is his team's job to arrest criminals. He said his team will continue to actively search for undocumented immigrants with criminal records, and his agents will not turn a blind eye if undocumented family members or friends are in the wrong place at the wrong time.

"Residents should expect a more visible ICE presence in the Raleigh-Durham area," Gallagher said. "ICE will now have no choice but to conduct more at large arrests in local neighborhoods and at work sites, which will inevitably result in additional collateral arrests instead of arrests at the jail where enforcement is safer for everyone involved."

Durham County Sheriff Clarence Birkhead said that it's unfortunate ICE took this approach instead of coming to him to have a conversation.

"ICE is a federal agency. They have the authority obviously to enforce federal law and civil law but if they want me to hold someone under a detainer I'm not going to do that because that amounts to a new arrest and that arrest should be based and for me must be based on probable cause."

Wake County Sheriff Gerald Baker also weighed in on the arrests. "It makes no difference whether a person is here in this county legally or illegally. If he or she breaks the law in this county, then they will be arrested and prosecuted just like anybody else," he said.

The arrests this week have taken place across the Tar Heel state including Charlotte, Burlington, Durham, and parts of Wake County.

Bryan Cox, a spokesman for the ICE, added, "ICE does not conduct any type of random or indiscriminate enforcement. The agency focuses first and foremost on criminal offenders and other public safety threats."

Let me be clear, it's makes no difference whether a person is in this country legally or illegally, if he or she breaks any law in this county, they will be arrested and prosecuted.

Any individual released from the Wake County Detention Center has met requirements of bail set by the courts. We release individuals by order of the courts.

Durham County Sheriff's Office response:
Sheriff Clarence Birkhead, the Durham County Sheriff stands by his decision to end the practice of honoring ICE detainers. Detainers are a request from Immigration and Customs Enforcment or ICE made of detention centers to hold suspected undocumented immigrants 48 hours beyond the time they would legally be allowed to be released after posting bond or serving a sentence.

ICE is notified of an individuals presence in a facility when they are entered into a database accessible by all law enforcement. Once an individual is processed into the detention center ICE has the opportunity to obtain appropriate court orders or warrants to take someone into custody. We will comply with these legal court orders.

In response to a statement made by immigration officials today Sheriff Birkhead offers the following statement "It is unfortunate that ICE is now becoming more active in North Carolina, specifically in Durham. The recent actions of ICE agents are making persons, in our community, afraid of law enforcement. The decision I made to not honor ICE detainers was in part to help ALL of Durham's people feel safe and encourage our residents to feel like they can trust my deputies, and law enforcement in general. And, if ICE agents presented a warrant, which is based on probable cause, in my capacity as sheriff I would support such an action."

"North Carolina Democrats stand with our immigrant communities amid this renewed and unwarranted harassment from ICE and the Trump administration. North Carolinians made their voices loud and clear last fall by rejecting politics of fear and division and electing new officials who refused to comply with this administration's cruel policies that rip families apart and make our communities less safe. North Carolina's Latino community is a vibrant part of our state and North Carolina Democrats will continue to stand with them against these cruel, unwarranted attacks and threats from the Trump administration."
Report a correction or typo
Related topics:
charlotteicenorth carolina newsimmigrationcharlotte newsdurham county news
Copyright © 2020 WTVD-TV. All Rights Reserved.
More Videos
From CNN Newsource affiliates
TOP STORIES 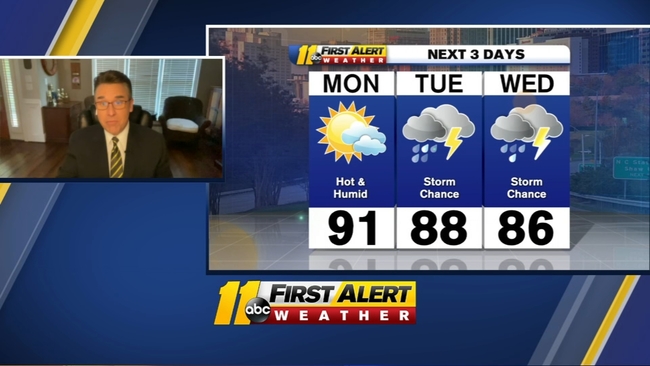