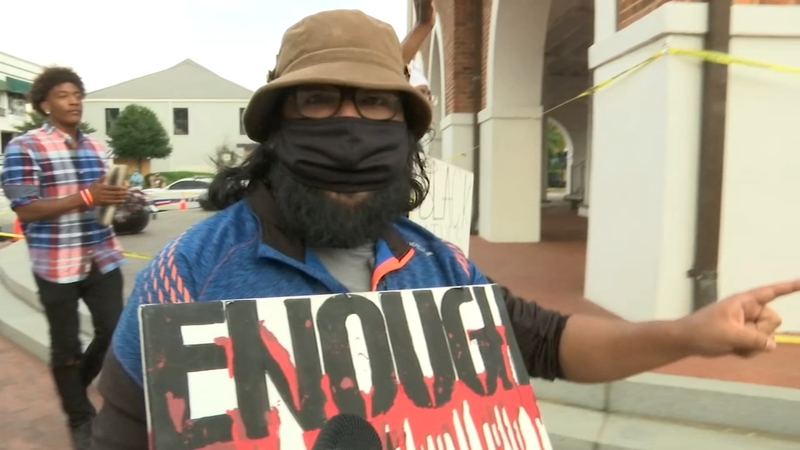 One speaker said, "law officials must be held accountable for their actions."

This is why Fayetteville P.A.C.T has listed four demands for city and county officials to apply: an oversight board for the police department and sheriff's office, the Brady List from District Attorney Billy West, masks and COVID-19 testing for everyone in the detention center and an end to cash bail.

HAPPENING NOW: Several local organizations are meeting outside city hall, having conversations about racism and systematic oppression. Individuals are coming up sharing their stories of being black in the U.S. @ABC11_WTVD pic.twitter.com/NnvtFEOyNw

Individuals, outside city hall, also spoke in front of dozens of people, sharing their heartbreaking stories of loss.

Allison said Treva Smutherman was shot and killed after he got into an altercation with a Fayetteville PD detective.

The Smutherman family is still trying to learn more about the investigation into his death and wants more transparency from police.

After the discussions, the demonstrators proceeded to march peacefully from city hall to the Market House.

When they arrived, community leaders decided to walk around the historical building, known to be a place where slaves were sometimes sold, seven times like the Israelites did in Jericho in the Bible.

But FPD officers and National Guard troops quickly arrived on the scene, trying to get demonstrators to move toward the sidewalk. After demonstrators refused, law enforcement began placing vehicles in the way, but passionate men and women continued walking.

"We are demonstrating peacefully. We are making seven circles around this Market House to tear these walls down. They don't want us to send that message, because they know they don't have power over us," one demonstrator told ABC11.

As they made their final lap, Miss Lee knelt down by the historical building, overcome with emotion.

"I kneel because enough is enough of killing. I have children. I'm a black mother. I have family, I have friends, and this is totally ... look at what the children have to deal with," Miss Lee said.