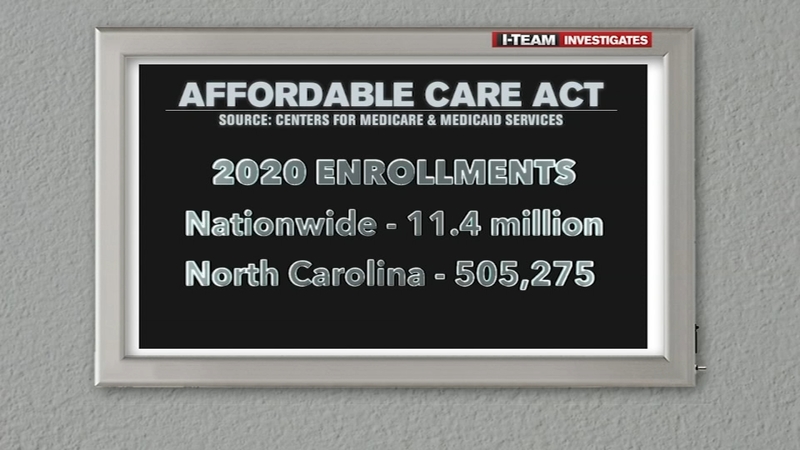 RALEIGH, N.C. (WTVD) -- For better or worse, the Affordable Care Act--also known as Obamacare--is the preexisting condition for the health insurance industry.

"I've got two young children and I'm not getting any younger," Cameron Duncan, a Raleigh small business owner, said. "Having health coverage makes the most sense."

Duncan is the owner and manager at Staff'd NC, an events staffing company that has seen business plummet since the onset of the COVID-19 pandemic.

"While I'm not working as much as I used to be, and I would love more work, not having health coverage is pretty risky for any family. You really understand that Obamacare savings once you go through something like this and your work is 95% down."

Duncan and his family have purchased health insurance on the open marketplace set up through the ACA since 2016. They're among the more than 11 million Americans and 500,000 North Carolinians who buy policies and benefit from subsidies that make the premiums more affordable.

"We would certainly have burned through our savings much quicker with an additional $700 a month," Duncan said. "It would've been horrible."

"One of the things we know about people is when they are short of money and have to make a decision about rent, food or medicine--they won't buy medicine or visit the doctor because that's considered a luxury," Catherine Sevier, President of the AARP North Carolina, said. "Having insurance is critical to keeping all of us financially solvent and keeping the workforce intact."
Politically, Obamacare continues to endure despite several attempts to undo it, though this week the Supreme Court again heard arguments from opponents still seeking its demise.

"It's really hard to find a precedent of a Supreme Court decision that would have such a sweeping effect on the country," said Larry Levitt, executive vice president for health policy at the nonpartisan Kaiser Family Foundation.

An estimated 21 million Americans would lose health insurance nationwide if the law is struck down, according to an analysis by the Urban Institute. Protections for 54 million people with pre-existing conditions could also suddenly go away.