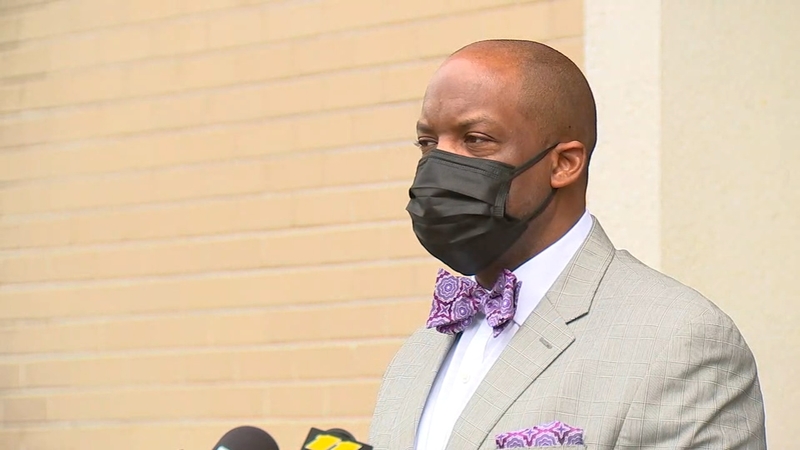 ELIZABETH CITY, N.C. -- Seven North Carolina deputies have been placed on leave in the aftermath of a Black man being shot and killed by members of their department serving drug-related search and arrest warrants, authorities said Friday.

The disclosure comes as calls increase for the release of deputy body camera footage amid signs, including emergency scanner traffic, that Andrew Brown Jr. was shot in the back and killed as he was trying to drive away.

Pasquotank County Sheriff's Office Maj. Aaron Wallio confirmed the number of deputies on leave due to the shooting in an email Friday. Sheriff Tommy Wooten II has previously said that multiple deputies fired shots and were placed on leave after Brown was killed Wednesday morning.

Wallio's email also said that another three deputies have recently resigned, but he later clarified that the resignations were unrelated to the shooting. He said the department has about 55 total sworn deputies.

Democratic Gov. Roy Cooper joined calls for the swift release of the body camera footage, saying that initial reports of what happened "are tragic and extremely concerning."

"The body camera footage should be made public as quickly as possible," he said in a tweet Friday night.

Gov. Roy Cooper is among North Carolina leaders and activists calling for transparency from law enforcement after a Black man was shot dead by deputies while serving a search warrant.

Earlier in the day, the City Council in Elizabeth City unanimously voted to send a letter to the sheriff, local prosecutor and State Bureau of Investigation demanding release of body camera footage. The measure also directed city staff to petition a local court to release the footage if the sheriff denies the council's request. Wooten has confirmed that at least one deputy was wearing an active body camera but hasn't given a timetable for releasing it.

"Doing nothing is not an option," said Councilman Michael Brooks.

The council's measure isn't binding on the Pasquotank County Sheriff's Office, which is a separate entity from city government. In North Carolina, a judge must generally sign off on release of body camera footage, but the law says anyone can file a petition in court seeking its release. A coalition of news outlets including The Associated Press also filed a petition Friday asking a local judge to release the footage.

"As an attorney, I believe in the Constitution, the amendments and the laws, and I would be lying if I told you my belief wasn't being tested," said City Manager Montre Freeman. "We probably know even less than what you know about this occurrence."

Mayor Bettie Parker said the city was not made aware of the warrants and no Elizabeth City police officers were part of serving the warrants to Brown.

"We are demanding that we have transparency and accountability. That's important if our citizens will trust our elected officials and those in law enforcement," said Parker.

"One of the things I take from this is Elizabeth City is a microcosm now of what's going on across the country. I see now no city, small or large, or exempt," said Parker.

MORE: “We probably know even less that you know.” As per NC statute, #ElizabethCity officials to file brief in court for release of body cam video from Pasquotank Sheriff’s deputies involved in last weeks shooting. @ABC @ABC11_WTVD #AndrewBrownJr pic.twitter.com/vyMsFsP2ov

The city manager and mayor said city council voted Friday in an emergency meeting to deliver an official letter on Monday to the sheriff's office to request the body camera footage be released to them and the public.

#ElizabethCity Police Chief: arrest warrants for #AndrewBrownJr were only from Pasquotank County. No arrests or property damages reported in successive protests. “We will stay vigilant.” @ABC11_WTVD @ABC #abc11 pic.twitter.com/fLsiekbDOv

"Local authorities continue to say they'll act transparently, but we've seen anything but since the tragic killing of Andrew Brown Jr. We don't have the names of the officers, we don't have bodycam footage, and we don't know what transpired except what is being reported by witnesses. This family and the Elizabeth City community deserve answers now. While there may be a light at the end of the tunnel with one pandemic, another one continues to rage within the borders of our country - police excessive force against marginalized minorities," said Crump in a statement. "The verdict of Derek Chauvin was certainly a victory in the fight for equal justice, but the killing of Andrew Brown Jr., only a day later, indicates we have so much further to go. We will continue to demand transparency and accountability from Elizabeth City leadership and from the Pasquotank County Sheriff's Office. And we won't stop fighting for justice for Andrew, his family, and for all victims of law enforcement overreach and police brutality."