Donations pour in at car wash for beaten Raleigh woman 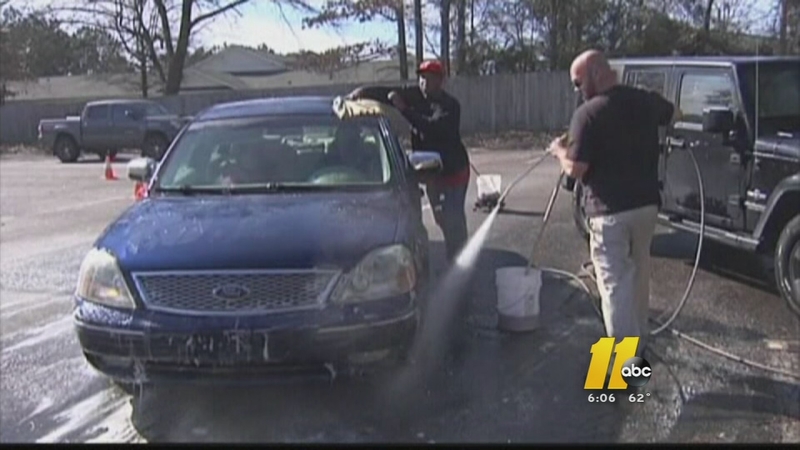 RALEIGH (WTVD) -- It was a labor of love in the form of washing cars on Sunday afternoon outside of the Knights of Columbus in Raleigh.

Bo Bodenstein, who is with the organization, used the space to roll up his sleeves, call in a favor and raise money for a woman he calls a friend.

Nice is the former general manager of the once popular, and now closed, Tir na Nog in downtown Raleigh. She is also a well-known leader in Raleigh's Irish community. Nice was mugged last week and beaten by three men.

Her injuries are severe and her medical bills are piling up. Without her job to fall back on, people in the community she helped to entertain for years are now coming to the rescue.

In addition to the car wash, a GoFundMe page has surpassed its fundraising goal to help Nice.

Bodenstine called his friend Terry Douglas. Douglas owns Detail Matters, Mobile Detailing Services. Bodenstine told him he wanted to organize a car wash to raise money for Nice. Douglas doesn't even know Nice, but did not hesitate to call in his crew, all more than willing, to break out their car washing gear equipment.

They held the car wash from noon to 3 p.m. on Columbus Club Drive on Sunday, but had to extend it to 4 p.m. for the more than 50 cars that rolled through.

UPDATE:A spokesperson with Knights of Columbus said they have raised $565 so far, and people were still calling in with donations.

"It makes me proud to be from Raleigh, it's my hometown. And to see the community come together...it moves me, I'm very glad to be part of it," said Douglas.

Sunday's car wash isn't the only fundraiser planned for Nice. Outside of the GoFundMe page, Bodenstine is also organizing a barbecue with the Knights of Columbus on Columbus Drive in Raleigh on Friday, Feb. 5 from 5:30 p.m. to 9:30 p.m.

"Helping people in need, that's the true calling of what life's about," said Bodenstine.

Meantime, Raleigh police are still looking for the suspects who mugged and beat up Nice. If you know anything call CrimeStoppers at (919) 834-HELP.