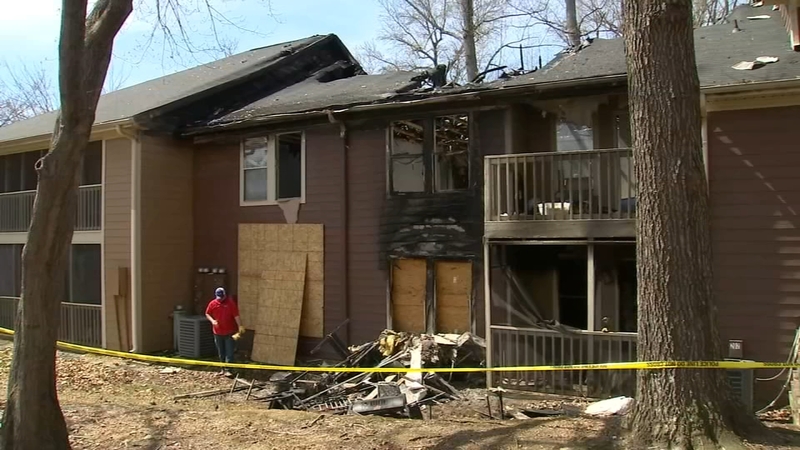 RALEIGH, N.C. (WTVD) -- Firefighters responded to a report of a fire at the Six Forks Station Apartments in Raleigh on Sunday evening.

The fire started around 7:15 p.m. on Old Station Drive. According to a report from fire investigators, an electrical failure started the flames.

The report said 50 firefighters responded to the fire that took about half an hour to get under control.

Firefighters said a first-floor and second-floor apartment are destroyed and adjacent apartments have smoke and water damage.

"I just heard popping and stuff like that. I ran outside. Everyone was pointing to the neighbor's house," resident Kendall Lassiter said. "I tried to run around the front to go inside and get her, but I couldn't get past the door because there was so much fire."

Two firefighters were treated for burns on the scene and a woman was taken to a local hospital with smoke inhalation injuries. Monday morning, officials said the woman had died from her injuries.

Erika Williams told ABC11 that she had been crying all day.

Fire ripped through her apartment -- killing the 83-year-old woman who lived below.

"(She must have been) just as scared as we were," Williams said. "The fire wasn't even to us yet -- I can only imagine what she may have been going through inside of there."

Officials said smoke detectors were present in the apartment complex.

The Raleigh Fire Department said it wasn't sure where the fire started in the ground-floor apartment. An official said there was an undetermined electrical malfunction.

Williams said she and her family jumped to safety from their second-floor balcony.

She lost everything but is thankful everyone made it out.